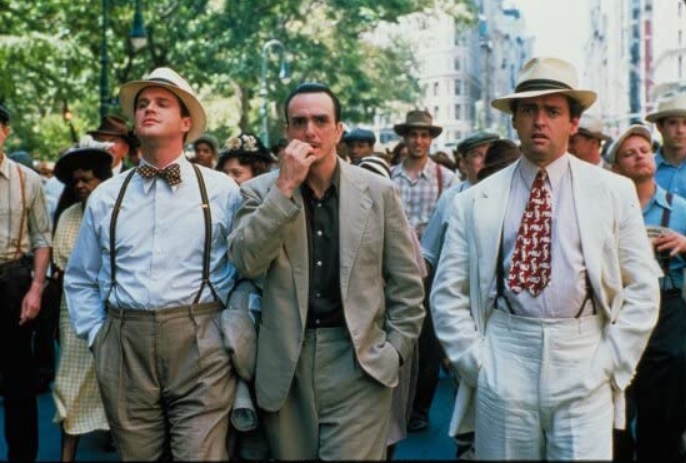 How the faithful city has become a whore!
She that was full of justice, righteousness lodged in her--
but now murderers!
Your silver has become dross,
your wine is mixed with water.
Your princes are rebels and companions of thieves.
Everyone loves a bribe and runs after gifts.
They do not defend the orphan,
and the widow’s cause does not come before them.

Because of the interest in Orson Welles raised by Netflix’s MANK, we reach back to the March 2000 issue of VP for this film in which Welles is an important part of Broadway history.

Actor Tim Robbins adds to his writing and directing laurels with this film set in an era when art and theater really mattered. The time is the  mid-1930’s, and the place is Manhattan (with scenes from Washington D.C. where the infamous Dies Committee is riding the crest of anti-Communist hysteria). Hallie Flanagan (Cherry Jones) as director of the WPA-spawned Federal Theater Project is attending to the multitude of details involved in mounting dozens of plays around the country that employed thousands of out of work artists and actors. The FTP lasted only four years before it was terminated by the anti-New Deal Congress, but its cultural impact has been enormous, many actors and directors going on to win great acclaim in the theater and film. Until now the amazing story of the FTP, and especially of its controversial production “The Cradle Will Rock,” was little know beyond theater circles–and even there only known in part. Tim Robbins and company, through their meticulous research and engaging performances, have done us a real service in bringing to life this stirring moment in our history.

Mr. Robins plays a little loose with history in that the infamous confrontation between Nelson Rockefeller and artist Diego Rivera concerning the latter’s huge mural in the lobby of the RCA Building actually occurred a couple of years before the Dies Committee witch hunt and the controversy over “Cradle Will Rock.” Mr. Robbins brings them all together to show how the old and the new worlds were colliding–the old world of wealth and power gained from exploiting workers and the poor; and the new world being born represented by unions and artists protesting injustice. The scene in which Rockefeller, Hearst and their wealthy set gather for an 18th Century-style costume ball adds a brilliant touch, reminding us of the French aristocracy, equally heedless of the needs and protests of the people of their day.

While the indefatigable Hallie Flanagan tries to keep her far-flung productions going and defends herself and her staff against charges of Communist subversion, a series of vignettes from a dozen or so characters are interwoven–Olive Stanton (Watson) obtains a job as part of the stage crew for the new play “Cradle Will Rock” Welles & Houseman are mounting; Houseman tries to keep the cast from quitting because of their resentment of the pressure that the frenetic Welles places them under; actor Aldo Silvano, playing a supporting role in the mercurial Welles’ production of Faust, argues heatedly with his wife’s family about Mussolini; Mark Blitzstein works out the lyrics of the play, inspired by scenes of brutality he himself sees committed in New York, as well as the news stories of police beating and shooting striking steel workers in Ohio. Young Nelson Rockefeller visits Diego Rivera and hires him to paint a mural, then they quarrel over the inclusion of a portrait of Lenin in the work, and Rivera is forcibly ejected from the building. Rockefeller and his rich friends cynically speak of their controlling artists by offering commissions only to those who will accept their viewpoint.

Selling out is an important theme in the film, some of the characters describing this as prostitution. Diego Rivera and Margherita Sarfatti argue over this, the artist accusing the former mistress of Mussolini of selling herself, she being from a Jewish family. Now selling Italian art to raise funds for the dictator’s war effort, as well as ghost writing for him the newspaper column which appears in Hearst’s papers, Margherita points out that Diego himself is also prostituting himself by accepting the lucrative commission from Rockefeller, a man doing business with Mussolini. Diego is able to refute this charge later on when he refuses to compromise his mural, declaring he would rather see it destroyed than paint over the face of Lenin. Rockefeller accepts the artist at his word, barring him from the building. As scenes from the play “Cradle Will Rock” unfold, the camera cuts away to brief shots of workmen destroying Rivera’s magnificent work with sledges and jackhammers.

The actors in “Cradle Will Rock” are faced with a dilemma when Hallie Flannagan has to give in to a directive from the White House and Congress to cancel the play. Its plotline about a steel mill strike is too close to the headlines, especially as author Blitzstein is avidly pro-union. Even though ten thousand tickets have been sold, troops padlock the Maxine Elliott Theatre, not allowing the actors even to get to their costumes. The unflappable Welles continues as if the play will go on somehow–and Houseman does find an empty theater twenty blocks away, the Venice Theater. However, the actors’ union, fearful of incurring the wrath of the government, orders the actors to leave the play. Blitzstein is not a union member, so Welles convinces him to stage a one man show, with only the support of his piano.

On the night of the play’s opening 1200 people march from the locked theater to the Venice. They are led by Welles and Houseman and included in the crowd are the original cast members. Inside the Venice, as the audience gathers, an agile young man climbs up and rips down the Italian flag, to the cheers of  the throng. This seems to set the stage for what follows, when the nervous Mark Blitzstein appears on stage  and starts to play and sing his banned play. Something happens that is so incredible that one would think it had to have been made up, except that the incidents of that June 1937 night are so well documented.  The climax might seem more like a Hollywoodish fiction, but it actually happened.

Cradle Will Rock, the movie, is the kind of memorable film that an Amos or Isaiah might have written. Even though the incidents it recounts took place over 60 years ago, they still are relevant today, as can be seen by right wing attacks on government funding of the arts and an attempt by the Mayor of New York to censor an art exhibit in Brooklyn.

The story of the cast of "Cradle Will Rock" & their protest march during the 30s when the FTP play, directed by Orson Welles, was banned for being "Red."
Editor Rating ★★★★★5 out of 5
More Details