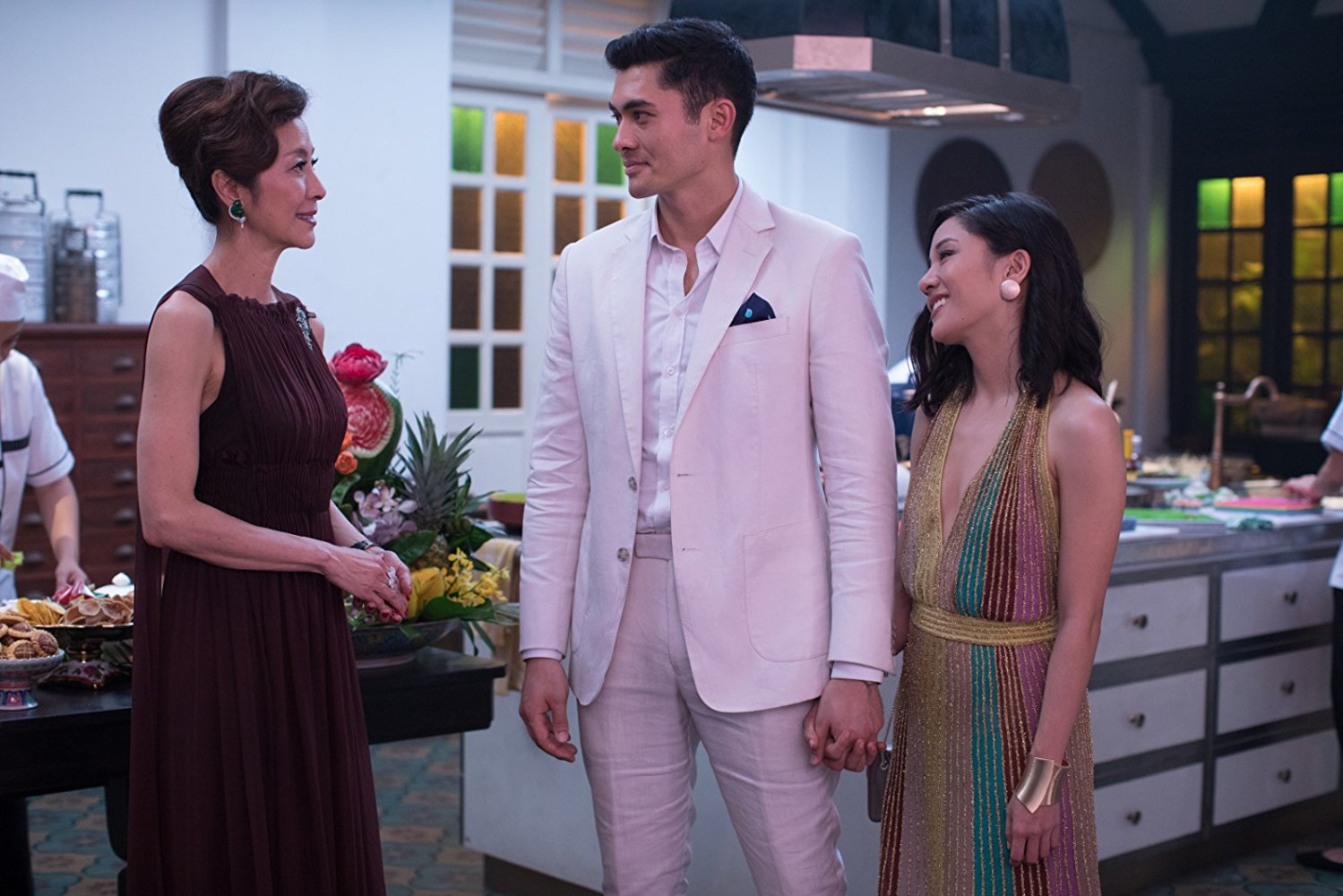 Love is patient; love is kind; love is not envious or boastful or arrogant 5 or rude. It does not insist on its own way; it is not irritable or resentful; 6 it does not rejoice in wrongdoing, but rejoices in the truth. 7 It bears all things, believes all things, hopes all things, endures all things.

Do nothing from selfish ambition or conceit, but in humility regard others as better than yourselves. 4 Let each of you look not to your own interests, but to the interests of others.

If you like old fashioned romances set in the Internet Age, you should love director Jon M. Chu’s adaptation of Kevin Kwan’s novel of the same name. Many of the Asians in this film are rich, filthy rich, and, to those of us who would agree with the Galilean prophet that “it is more difficult for a rich man to enter the kingdom of heaven than a camel to pass through the eye of a needle,” these rich Asians are certainly crazy. Much of the media buzz has focused on the all (most) Asian cast, which is terriffic, but there are other factors that make this a must-see film.

In the script, written by Adele Lim and Peter Chiarelli, Rachel Chu (Constance Wu), an American-born Chinese economics professor at N.Y.U., has been raised by her single parent mother Kerry Chu (as Tan Kheng Hua). For over a year she has been dating Singapore-born Nick Young (Henry Golding), who is planning to return home for the wedding of his best friend. He wants to introduce Rachel to his parents, so he persuades her to accompany him.

Nick is such an unpretentious young man that Rachel’s first clue that he is wealthy is when they enter the Asian airliner and are conducted to the First-Class section that is as lavish as that of the old TWA China clippers. To her exclamation that he must be rich, he replies just “comfortably” so. It is only after her arrival in Singapore at the home of her college best friend Peik Lin Goh (Awkwafina) that she learns that the Young family’s real estate holdings have made them the wealthiest family in the area. Her Nick is regarded as the most eligible bachelor of the Asian oligarchy.

We must believe that Rachel is that rare person who never uses Google to satisfy her curiosity about anyone. Just how pervasive is the Internet we see in the amusing New York scene in which Nick and she are eating lunch. Spotted by a woman familiar with Nick’s face, a message is sent out with a photo of the pair, which triggers dozens and then hundreds of “shares,” until at last the message and image reaches the cell phone of Eleanor Young (Michelle Yeoh) in Singapore. Nick’s mother is not pleased that her son is serious about a nobody. All this passing on of information is completed before Nick and Rachel leave the restaurant!

In Singapore, getting ready to attend the party at which Nick will introduce her to his mother, Rachel dons the lovely red cocktail dress her mother had helped pick out for her. Peik Lin, whose parents’ taste for furnishing their lavish home is akin to that of Elvis Presley or Donald Trump’s, immediately nixes it as inappropriate, suggesting one of her far more expensive gowns. At the party Eleanor is polite but cool to the girl. Many of the jealous women pining for Nick, stare daggers at her. A detail to remember in this scene of ostentatious wealth is Eleanor’s family heirloom ring, set with a huge emerald, a ring that will become important in a later scene between Eleanor and Rachel. Amidst the snobbishness of so many, there is also the genuine welcome by the wedding couple, Colin (Chris Pang), and his fiancée Araminta (Sonoya Mizuno), as well as some of Nick’s cousins.

Colin and Araminta seem to think nothing of spending $30 million on their nuptials, which includes several preliminary parties for the guys and gals on exclusive islands set aside just for them. The film is good at showing the excess—DJs and bands and food enough to feed a city—but eschews any suggestion that such display might be obscene in a world where thousands of impoverished people close by are near to starvation. This is after all, an escapist Cinderella story.

As Eleanor makes her disapproval clearer, Rachel reaches the point of decision—shall she put her happiness before Nick and his relationship with his family? Her choice is a lovely example of Jesus’ and Paul’s understanding that love is giving and not receiving, and that winning in the spiritual sense means losing or letting go.

To the movie’s credit Eleanor is not a one-dimensional dragon lady, but a complicated human being struggling with her own issues. That she is wealthy and thus powerful we see in the film’s delightful opening scene set in the mid-90s; she arrives at a swank London hotel and rejected by the haughty manager, mistaking her for just another undesirable Asian. Even though she tells him she has a reservation, he insists that the suite is occupied. Almost before she can switch off her cell phone she announces that she has just bought the hotel. Suddenly the suite is “available.”

And yet as powerful as she is, her mother-in-law, referred to always as Grandmother (Lisa Lu) is still the family matriarch, ever ready to put down her daughter-in-law. Eleanor reveals to Rachel that her husband had married her against his mother’s wishes. That the old woman still disapproves we see in two scenes: the first in the kitchen where Rachel joins Eleanor in making noodles for dinner; then at the dinner table where Grandma disdains them, even though everyone else has praised them.

The film is enjoyable not only for its heart-warming story, but also for its visual delights. There are so many interspersed scenes of the preparation and cooking of Asian food that one might be reminded of those moth-watering ones in Babette’s Feast. And the city of Singapore is gorgeously displayed, with its breath-taking buildings, that the Singapore Tourist Agency (or whatever) should use it to advertise its many attractions. The camera frequently displays the modern city’s towers, with the Marina Bay Sands complex a special stand-out. The wedding party is held atop its luxurious Sands Skypark that connects the three hotel towers. If there are any slums in this magnificent looking city, we never see them—but then, such a glimpse might spoil the fantasy and our enjoyment of the film’s denouement, which is close to the gospel teaching that love wins by losing. Very much a feel-good movie.

Can a middle class Chinese-American girl overcome the snobbery of the Singapore filthy rich mother of her lover?
Editor Rating ★★★★★4.5 out of 5
More Details