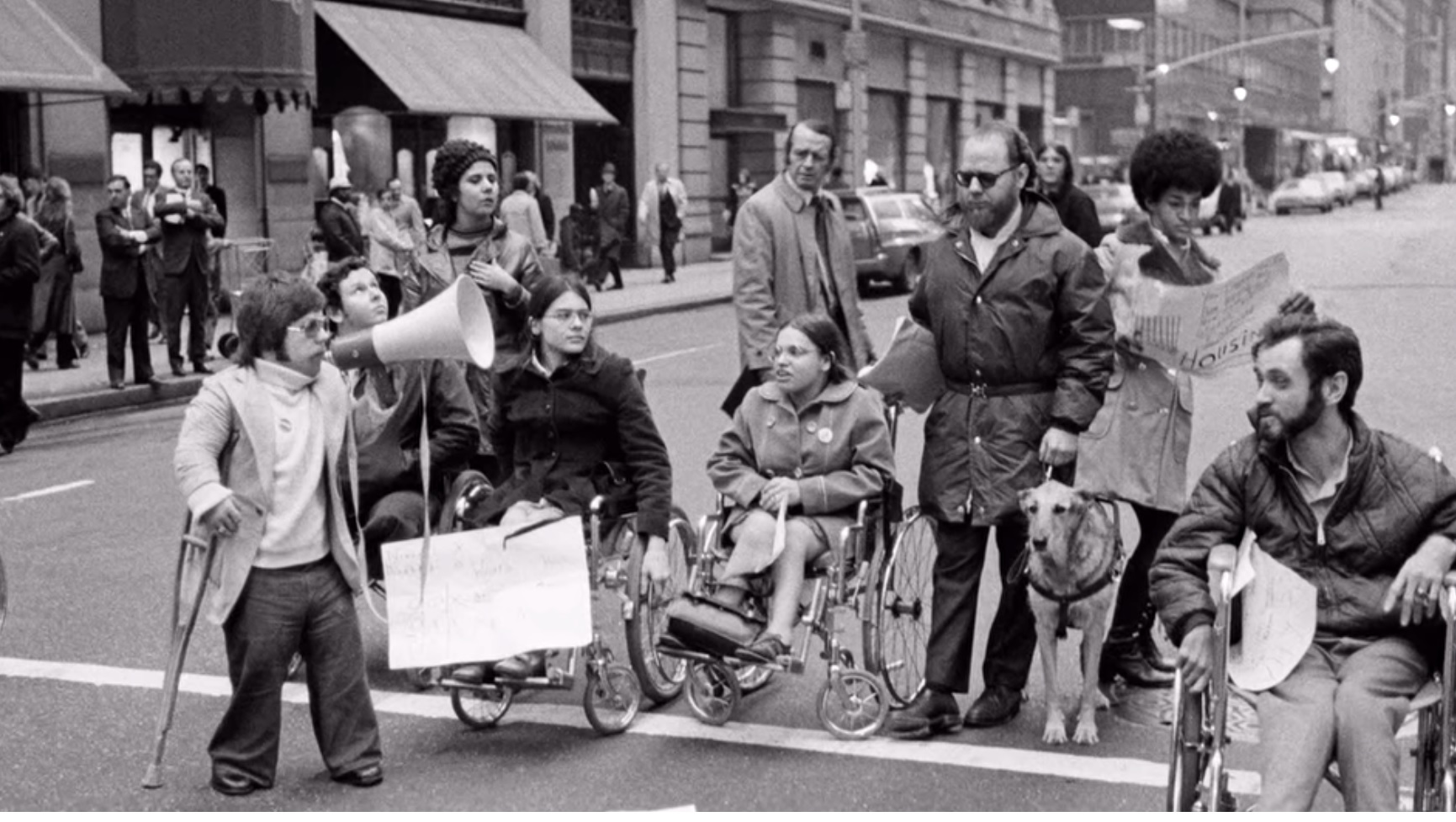 You’re here to defend the defenseless,
to make sure that underdogs get a fair break

Directors Nicole Newnham and Jim LeBrecht have given us an inspiring stand up and cheer film about outsiders knocking and kicking at the door of society until at last it is opened. It is an exciting story, beginning in an upstate New York camp, branching out to New York and California, and then invading Washington DC, where eventually in 1990 the ADA (Americans with Disability Act) revolutionized the world for those with physical disabilities.

If you Google ADA, you will find generalized histories and explanations, one of them even saying that not one person but many brought about the change. True that there were numerous activists leading the struggle, but this film demonstrates that it was not nameless “persons” but individuals who sacrificed for change, one of those persons being James LeBrecht.

At the beginning LeBrecht reports that he had been born with Spinal Bifida and expected “to live for a few hours.” He survived and at the age of 15 wound up at Camp Jeden, up in the Catskills not far from Woodstock. Founded in the 50s, one alum describes it as a “camp run by hippies.” The  head hippy was camp director Larry Allison who had a very different philosophy of dealing with the disabled. Using archival footage, home movies, photos, and talking head interviews with living alum, LeBrecht and Newham show us a camp that became the seedbed for radical change in the surrounding society. The camp section is probably less than a third of the film, the majority of it dealing with the tumultuous struggle that until now has been overshadowed by the Civil Rights struggle against racism. LeBrecht and his fellow campers—he embraces the word “crip”– we see, were almost as much excluded from society as were Blacks.

Several of the camp alum still alive testify to the difference in the way that Allison and his counselors treated them—not as victims to be pitied and coddled but as persons of dignity with the right to speak and determine their own lives. One former camper speaks of the over-protectiveness of his parents, and some of the disdain and bullying exacted by his peers.

But we have more than their memories—the directors came across a treasure trove of half-inch video footage shot by the  People’s Video Theatre of Brooklyn between 1970 and 1972. What that group intended to do with it we are not told, but thank goodness it was not taped over or thrown out. We see and hear the young campers and counselors laugh, play games, swam, sing and dance, date (yes, some engaged in sex), debate—on the day the cook was to have the day off they voted on what they would cook for the main course—and doing all the other things that “normal” teenagers do. Thus the campers gained a sense of worth and the ability to speak out on their own behalf.

Of the many delightful people we meet, most of the focus is upon one of the young counselors, then 23-year-old Judy Heumann, a polio survivor confined to a wheelchair. “Confined” is not the best word in her case, because she did not let her disability define her but felt a sense of empowerment that transferred over to the campers as well. There are no heavy moments in the camp scenes, the video clips and the remembrances being filled with laughter and joy. Nurtured toward the goal of self-care, these campers were destined to move out into society rather than to sit passively at home.

The film moves on to California where filmmaker LeBrecht has moved, fueled by a dream of becoming a sound engineer for the Grateful Dead. Judy Heumann becomes an activist in San Francisco where has founded an organization lobbying for laws mandating the right of access for the disabled. Its name is Disabled in Action, and with Judy’s leadership it lives up to its name. Congress does pass a bill but President Nixon vetoes it on the grounds that it would be too expensive. At last in 1973 Congress does pass the Rehabilitation Act mandating equal access to federally funded facilities. However, officials of both Nixon’s and Jimmy Carter’s administrations refuse to enforce it, and so Judy—and several Camp Crip alums such as LeBrecht and Denise  and Neil Sherer Jacobson, who had met at the camp—stage a sit-in at the S-F federal office that continues for weeks. During their sit-in they are fed by the Black Panthers who approve of their goals to better the condition of the left out, as well as various unions and churches. (We see a clip of Glide Memorial’s famous social activist pastor Cecil Williams.) We also are taken back to Manhattan and to Washington where wheelchaired activists picket and even block traffic, until…

I have skipped over, but do not want to leave out the film’s darker sequence in which we see the traditional way that society chose to deal with the disabled whose families could or would not care for them. New York state had warehoused hundreds of the castaways at a large institution known as Willowbrook. Seeing row upon row of half-naked wretches suffering various forms of mental and physical disabilities packed into wheeled carts and beds by threes and fours made me think of the newsreels of the Holocaust camps, the former due to the passive neglect of society, and the latter to the active persecution. We are told that at Willowbrook there was on some floors one caretaker for every fifty patients! This needless suffering because the unfortunates could not “fit in” with a society too cheap to provide better care and accessibility.

The philosophy of Camp Jened’s staff will remind you of that of a character in a film reviewed elsewhere in this issue, The Sound of Metal. Joe is the head of a deaf community, and his belief that deaf people do not need to “be fixed” comes into sharp conflict with drummer Ruben who is rapidly losing his hearing. Joe teaches all the survival skills for a deaf person to thrive—lip reading, sign language, and above all a sense of self-worth. Both his rural deaf community and Camp Jeden are intended to deal with the whole person rather than just their “problem.” What a difference this makes.

This is another film from Michelle and Barack Obama’s production company reminding us that despite deeply entrenched forces, change is possible. It just takes a long time—and the persistent effort of courageous activists, some standing on their feet and others in wheelchairs. One of the latter is long-time activist Mary Mairs, afflicted by MS. In her “On Being a Cripple” she writes lines that describe as well the characters in this film as herself, indeed as fit an ending for this review as for her essay:

A friend, who also has MS startled me once, by asking, “Do you ever say to yourself, ‘Why me, Lord?’” “No, Michael, I don’t,” I told him, “ because whenever I try, the only response I can think of is, ‘Why not?’’ If I could make a cosmic deal, who would I put in my place? What in my life would I give up in exchange for sound limbs and a thrilling rush of energy? No one. Nothing. I might as well do the job myself. Now that I am getting the hang of it.”

How in the 60s an upstate NY camp for the disabled help shape many of the activists who went on to fight the federal government for equal rights.
Editor Rating ★★★★★4.5 out of 5
More Details