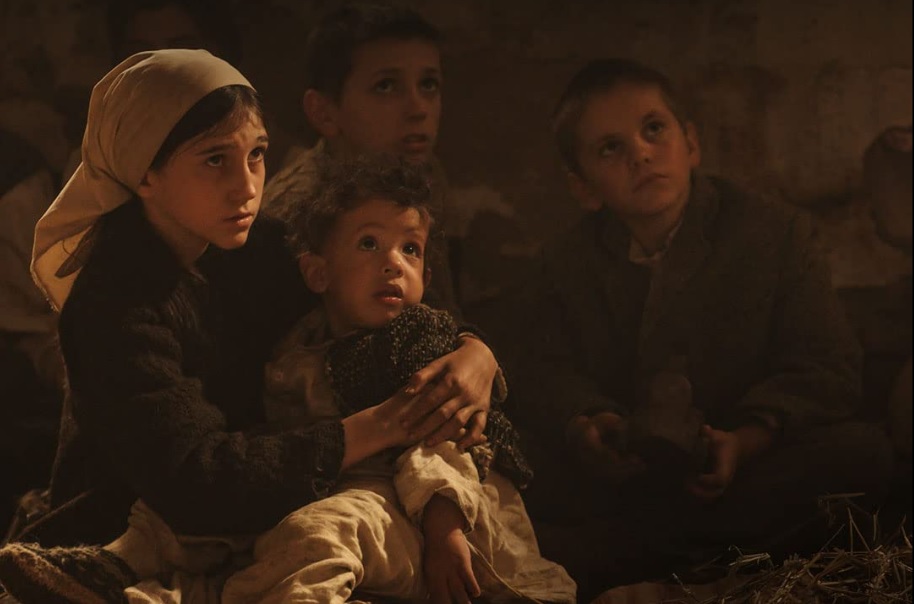 
May he defend the afflicted among the people
and save the children of the needy;
may he crush the oppressor.

Every year another filmmaker reveals new aspects of the Holocaust. Peter (Predrag) Antonijević’s Oscar-nominated film reveals that a vast number of Serbs also perished with the usual victims of Nazi hatred—Jews, gypsies, and homosexuals. This is the first film set in the Croatian extermination camp complex Jasenovac, sometimes known as the “Balkan’s Auschwitz” run by the  Ustaše government.  Script writer Natasa Drakuliche drew her story from survivor’s accounts, focusing in upon the harrowing experience of ten-year old Dara Ilić (Biljana Čekić). This is not a film for the faint-hearted, with many scenes of Croatian cruelty very difficult to sit through. There also has arisen controversy over the intent of the film, of which we will deal later.

At the beginning we see Dara, older brother Jovo (Marko Pipić), mother Nada (Anja Stanić Ilić), and toddler brother Bude being herded down a road by armed Croatian guards. Dara wonders why the women she sees working in a field are not also being taken. One of the onlookers makes eye contact with a mother and her little daughter in the procession. When the guards are distracted the mother rushes over to leave the girl with the Croatian woman and then rejoins the march, much to the disapproval of the Croatian woman’s companion.

At the train station Father Miroslav Filipović-Majstorović (Vuk Kostić) separates the healthy from the ill and elderly, and the others are loaded onto cattle cars. As the train leaves Dara can see the priest shooting those left behind.

The extermination camp is commanded by the sadistic Vjekoslav “Maks” Luburic (Marko Janketic) and his uniformed sister (Alisa Radaković), the film implying that there is an incestuous relationship between the two. The pair, backed by their obedient guards, make life for the prisoners a continuous hell of violence and ill-treatment. In one scene the pair are entertaining a Nazi visitor at a night banquet where a group of prisoner musicians provide music with their stringed instruments behind the diners. In front of the banquet table a circle of chairs has been set up. A group of male prisoners are ordered to march around them. A chair is removed, and when the music stops, the commander almost gleefully slashes the throat of the victim. This continues on and on, with some victims being killed by the blow of a heavy hammer and others by the specially made knife. It continues so long that the Nazi is appalled, and when he asks why the Serbs when Germany had ordered just Jews be slaughtered, the Commander replies, “Because they are Serbs.”

Dara’s mother, well aware that she might be taken away at any moment to a labor camp, impresses upon her daughter her duty to protect little Bude. It turns out that her fate is far worse. While protesting the sending away of her 12-year old son she stands between the boy and the camp official. With no hesitation the Croat takes out his pistol and shoots her, the bullet passing through her body and killing the son as well. Dara is left alone with Bude, hereafter seldom letting go of him, so insistent is she on caring for him.

Meanwhile Dara’s father Mile Ilic (Zlatan Vidovic) is at a prison camp a few miles up river where he is forced to dispose of the bodies of dead prisoners. First it is with a partner by simply tossing them into the river. Other times it is by digging massive ditches into which the corpses are rolled into them as if they were no more than unwanted roadkill. His duties also include stripping the dead of their valuables.  His hope is kept alive by the rumor that his family is still alive at the nearby women and children’s camp.

Dara’s childhood is smothered by the horrors she witnesses and experiences. Never enough to eat, and at one time e mad scramble for tin dishes for her and her little brother so they can even be given food. The frequently ill Bude is crying almost constantly. There is a hospital run by nuns, but no one wants to go to there because no one survives. The nuns are Roman Catholics, and the Serbs are Orthodox, so the women seem to feel no compassion for the horrors inflicted on their Christian cousins. They select some of the healthier children for catechetical classes designed to turn them into good Catholics.

Amidst the incredible brutality of the Croats there are small acts of kindness that shine, however faintly. Some of the women advise Dara and for a while one claims her as her own daughter. Blankica (Jelena Grujicic), a young Jewish woman who works in the hospital is specially kind bringing the two children scraps of bread, and when Bude becomes deathly ill sneaking him into a hospital bed. Over in the men’s camp Mile’s fellow Serbian Sonderkommando overseer finally agrees to see if he can find out if Mile’s family is still alive. Bringing back positive news increases Mile’s will to survive, and even to attempt to escape. Probably the brightest not of grace is the Red Cross representative who visits the camp ever so often with the authority to select some of the children to be bussed away for adoption. The last scene is of that of the Red Cross bus bearing the fortunate away, providing a slender reed of hope, though the fate of Dara and her father is left to us to imagine.

Ten-year-old Dara becomes the guardian of her toddler brother when her Serb mother is shot at a fascist Croatian camp during WW 2.
Editor Rating ★★★★★4 out of 5
More Details