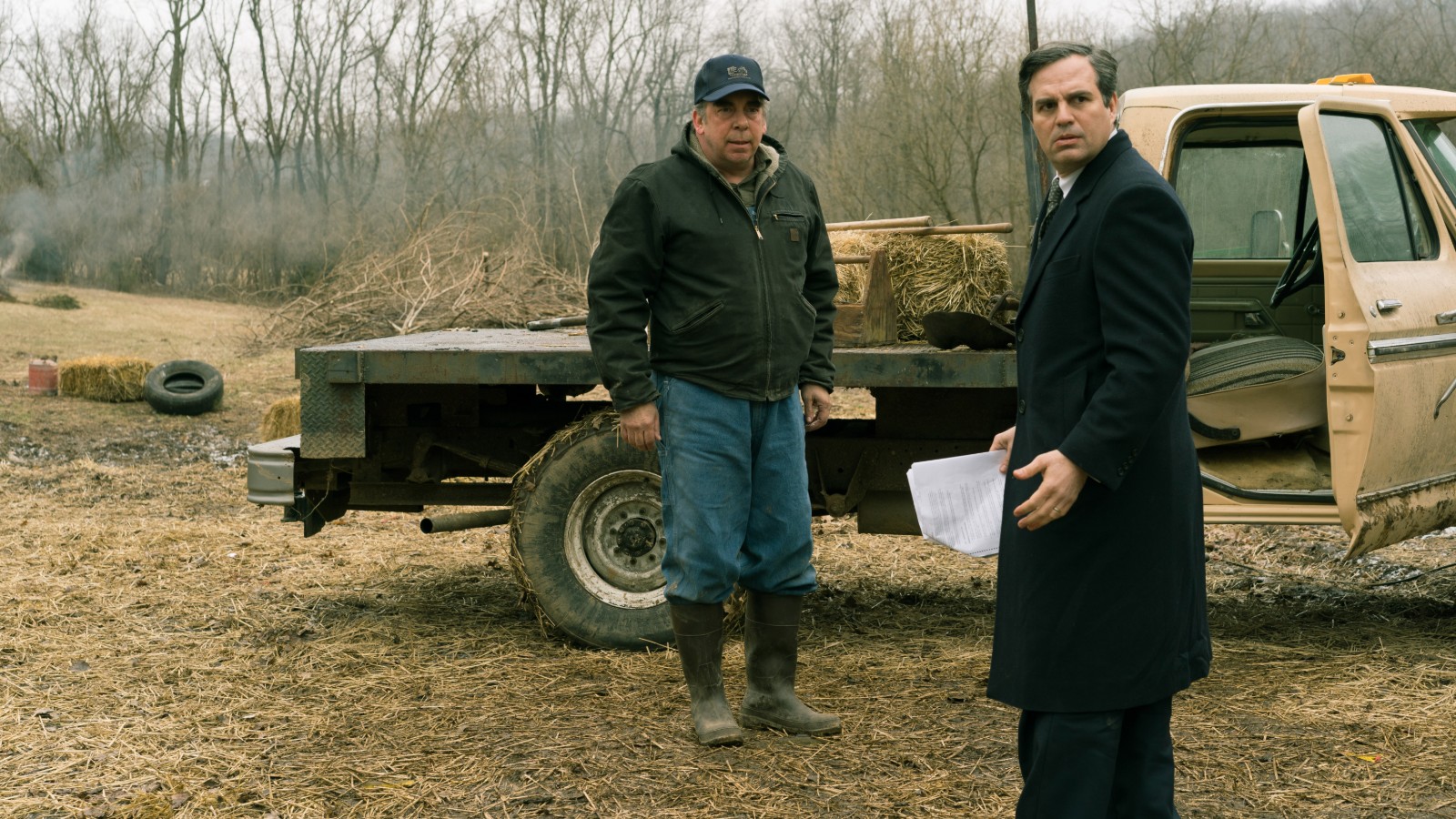 Those who try to hide their plans from the Lord are doomed! They carry out their schemes in secret and think no one will see them or know what they are doing. They turn everything upside down.

Todd Haynes, who directed the thrilling 2017 fantasy about two children separated in time, Wonderstruck, tells the true story of a brave and persistent lawyer whom we should make the exception in Shakespeare’s popular quote about “The first thing we do, let’s kill all the lawyers.” Dark Waters joins such David-vs.-Goliath stories as Erin Brockovich and Take Back Our Town. The legal thriller’s title does not refer to dark, shark-infected waters, but to the quotidian water that we drink or with which we wash. Thanks to the excellent script written by Mario Correa and Matthew Michael Carnahan, based on the 2016 New York Times Magazine story “The Lawyer Who Became Dupont’s Worst Nightmare,” legal odyssey unfolding over 17 years is made clear and entertaining.

After a pre-credits scene in 1975 showing a boat crew running off some skinny dipping teenagers from a polluted pond near Parkersburg, West Virginia, the film jumps to 1998 where at a meeting in the posh offices of Cincinnati law firm Taft Stettinius & Hollister, Robert Bilott (Mark Ruffalo) is welcomed as the newest partner. H is called out of the meeting when two West Virginia farmers arrive, demanding to see him. Wilbur Tennant (Bill Camp)and his brother Jim (Jim Azelvandre) have a complaint against the giant DuPont, largest of America’s chemical companies, and a box of video tapes to back it up. Irked by their intrusion, Robert politely but firmly tuns them down and returns to the meeting. When he mentions to his curious boss Tom Terp (Robbins) that the intruder had been sent to him by his West Virginia grandmother, the older man jokes that he will not hold his West Virginia origins against him. (This remark brought back to my mind the dozens of Kentucky-West Virginia jokes I’ve heard, deprecating “Hill Billy” culture, such as, “You know what they use for luggage? Two brown grocery bags.”)

However, because it was his Parkersburg grandmother who had sent her friends to him, Robert is bothered enough to make the 130 miles to Parkersburg to see his grandmother, who gives him directions to William’s farm. The distraught man shows him his sickly cows, a field where humps of dirt cover 190 dead cows, and the stream with the chemically bleached rocks that was the farm’s water supply. A DuPont dumping ground adjacent to the farm is the source of the toxic chemicals.

When Robert returns to his home that night, his wife Sarah (Anne Hathaway) is a bit upset that he had traveled to West Virginia without telling her. She thinks he had gone to see his mother in Parkersburg, but he assures her it was just his grandmother he had seen in connection with the business with farmer Tennant. Robert gains grudging permission from his boss Tom Terp to pursue the case, both of them seeing the irony that usually they are defending, not investigating the chemical industry. Robert’s assurance that the case won’t hamper his other work is soon thrust aside as the evidence against DuPont mounts and further trips back to West Virginia are required. Of course, we hear John Denver’s “Country Roads” during one of these trips, the ugliness of the landscape, diseased and dead animals standing in stark contrast to the beauty celebrated in the song.

Robert talks with DuPont attorney Phil Donnelly (Victor Garber), whom he knows, and soon is being regarded as an outlier by others who are totally sold on DuPont’s motto “Better living through Chemistry.” He and the Tennants become unpopular in Parkersburg whose residents regard the company as a benefactor only a little below God. During one trip we pass all sorts of items with the DuPont label, touting the company’s generosity to the city’s parks, schools, and even their trash depository bins. Other families with illnesses  become involved in the investigation, most notably Darlene Kiger (Mare Winningham) and her husband

The huge amount of legal work required is visible in the delivery of literally a room full of boxes of records sent by the company at Robert’s request. In such a major case there would have been a squad of paralegals scouring the records, but this is the case for a group of lowly farmers (others by now have joined the Tennants), so except for his secretary, Robert is mostly solo on this daunting mission. Like a documentary the years appear on the screen for the next few scenes, and what Robert thought would be a short term project drags on and on, mostly due to DuPont’s delaying tactics when they finally do get into the courts.

Through his research the lawyer discovers the company had produced a chemical called PFOA (or C8), used in popular household products and Teflon. Through experiments on animals the company knew that C8 was toxic, but there being no regulations regarding it, used it any way. Teflon products were bringing in $1 billion per year, so no one wanted to kill the goose laying the golden eggs.

During the long years spent on the case relations at times become strained between Robert and Sarah. By now they have several boys, and she feels many of his long hours spent on the case are stolen from the family. (Sarah’s status as a stay-at-home mom might have been depicted in a little more detail, though we do learn that she had herself been a lawyer who gave up her job for the sake of their baby.) Robert also has taken numerous pay cuts at the firm because of his exclusive work on DuPont. Only if the suit is won will any money be generated by his work.

Later on Robert’s own health is damaged by the stress and tension so severely that he is hospitalized. Also, there are sinister notes that strike fear: he believes someone at times is following or watching his and his grandmother’s house. Still later in a deserted parking garage, he gets in his car and inserts the key. He pauses, and the camera close up on his key and ominous music reveal that he is afraid the car might be wired for a bomb. We viewers have seen so many crime shows in which a victim is blown up, that we almost expect to see an explosion or him to open the hood and find a bomb wired to the system. I was reminded of the ending of Silkwood at this point. Tennant also seems to be in danger, as when he comes home and notices papers are disarranged. He yells, “They’ve been here!” Hearing a roar, he rushes outside and sees a helicopter hovering over his house, someone in it over a sound system issuing him a warning. The farmer points his rifle at the intruder, using its scope to obtain a closer look.

There are several times when Robert is so overwhelmed that he is tempted to give up. The worst setback is late in the story when, having arrived at an out of court settlement for what has turned into a class action suit, DuPont scraps the agreement. “The system is rigged,” he cries in despair, knowing that the company, armed with ranks of savvy lawyers, believes it can wear him down by requiring him to try the several thousand cases one at a time. Little do they know him!

Mark Ruffalo shows his versatility by playing the opposite of probably his best known role, that of Bruce Banner/The Hulk in the Avenger films. His Robert Bilott is a mild-mannered father comfortable with picking up a crying baby and getting it to cease. He does get angry, but he does not pop his buttons or shred his shirt and pants. In several church scenes we see he is a man of faith. I loved the scene where he and Sarah are singing with the congregation the popular modern hymn by Daniel L. Schutte, “Here I am Lord.” I suspect the hymn’s inclusion was because it almost perfectly encapsulates Robert’s story. In the body of the hymn God speaks about the need of his people, each time ending with the question, “Whom shall I send?” The chorus constitutes the prophet’s response (Isaiah 6:8-9 is the text source listed in the Presbyterian Hymnal), “Here I, Is it I, Lord? I have heard You calling in the night. I will go, Lord, if You lead me, I will hold your people in my heart.”

Robert Bilott does not see himself as a prophet—he has none of the fiery temperament or doomsday looks associated with an Old Testament prophet. But, led by his conscience and his love for his people in West Virginia, he is as dedicated, as tenacious as was Jeremiah during the long journal toward justice. Due credit must also be given to Wilbur Tennant, whose persistence at first was stronger than Robert’s. the latter had early on wanted to settle his case out of court because he knew the Tennants were hard up financially. Wilbur refuses, saying that the money was not the main factor for him. He wanted the corrupt company to be held accountable for its crime. Had Robert won their argument, the campaign against DuPont might have ended there and their even wider crimes against the public welfare might not have been brought to light.

This is a film certain to make Visual Parables’ Top Ten list, one which church leaders must see for themselves. It should cast a pall over DuPont by revealing that like so many large companies, it has put profit over the health and lives of the people. It’s public mask of community benefactor has been torn away, revealing a greedy, uncaring countenance that said “Public be damned.” The film shows that to a certain justice was achieved, but only to a certain extent. The company has been required to pay out over hundreds of billion dollars to the victims, but to my knowledge none of the executives who knew about or covered up the facts has been brought to trial. In fact, in the settlement DuPont denies any wrong doing. And hundreds of chemicals like C8 still are not regulated by the EPA. The Good Guys won, but the ones whose policies led to so much sickness and death did not lose—it was their company that was forced to make the payments. We are still very much in need of our Jeremiahs and Robert Bilott to protect us.

The true story of lawyer Robert Bilott who sued DuPont Chemicals on behalf of WV farmer Wilbur Tennant, whose cattle had been poisoned by the company.'s runoff water.
Editor Rating ★★★★★5 out of 5
More Details