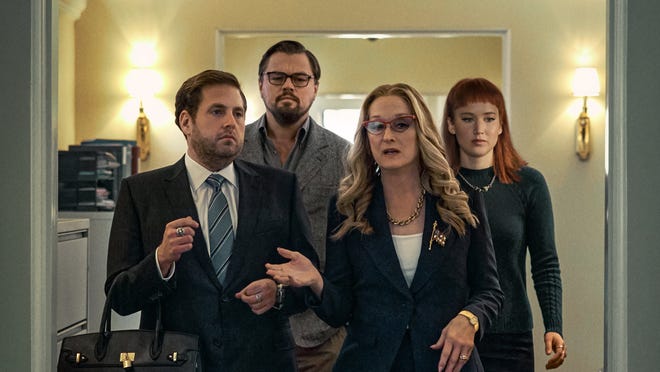 When Jesus Came to Birmingham

When Jesus came to Golgotha, they hanged Him on a tree,
They drove great nails through hands and feet, and made a Calvary;
They crowned Him with a crown of thorns, red were His wounds and deep,
For those were crude and cruel days, and human flesh was cheap.

When Jesus came to Birmingham, they simply passed Him by.
They would not hurt a hair of Him, they only let Him die;
For men had grown more tender, and they would not give Him pain,
They only just passed down the street, and left Him in the rain.

Still Jesus cried, 'Forgive them, for they know not what they do, '
And still it rained the winter rain that drenched Him through and through;
The crowds went home and left the streets without a soul to see,
And Jesus crouched against a wall, and cried for Calvary.

Adam McKay’s dark comedy addresses well the current scourge of far too many Americans who reject the outcome of the 2020 election and who have refused to take seriously the Covid pandemic because of misinformation peddled by talk radio hosts and Fox News and corrupt politicians. The film brought to my mind the similar rejection of the Hebrew prophets by their kings and people, as well as a powerful poem originally named “Indifference,” written in 1921 by a former British WW I chaplain, distressed by the cynical materialism of his people.

Michigan State University PhD candidate Kate Dibiasky (Jennifer Lawrence) is at an observatory in Hawaii one night when she discovers a comet. Her mentor Dr. Randall Mindy (Leonardo DiCaprio) is just as thrilled as she, until he figures the math of its orbit. His excitement changes to horror when he realizes it is on a collision course with Earth. The impact will be greater than the one that wiped out the planet’s dinosaurs!

Shortly after notifying the Feds he and Kate ate hustled onto a military cargo plane headed for Washington, DC. They have been joined by NASA’s Dr. Oglethorpe (Rob Morgan). At the White House they are put in the charge of a venal Pentagon general. He act ually charges them $20 for their snacks while they wait to see President Janie Orlean (Meryl Streep) about their urgent concern. Later the naifs are told that White House snacks are free.

The President, however, with her son Jason (Jonah Hill), whom she has appointed her chief of staff, has her mind set on the midterm elections which do not look good because of a sex scandal involving her Supreme Court nominee. The scientists wait and wait, and at the end of the day they are sent away, told to come back the next day. When they finally do get to meet with Orlean, she does not take their concerns seriously, blowing them off. With the encouragement of Dr. Oglethorpe, Kate and Randall decide to turn to the media. Unfortunately, their first appearance is on a morning talk show, and it will be at the end of the program. Hosted by Brie Evantee and Jack Bremmer the entertainment-oriented show is all too typical of most network daytime fluff. Played perfectly by Cate Blanchett and Tyler Perry, the pair of air-head hosts are far more interested in the romantic breakup of their first guest, pop star Riley Bana (Ariana Grande). Thus, when our scientists finally are brought out, the host’s desire to chit chat with them obscures Kate’s announcement that the comet spells the Earth’s doom. Kate explodes in a rage, her meltdown thus overshadowing her message. Randall, on the other hand, manages to keep his cool. He emerges as a public star, whereas Kate is the Cassandra scorned by all. But the resultant buzz is over the meltdown, and not the message.

There is more, including a momentary change of heart of the President who finds it politically expedient to launch a rocket to nuke the intruder and veer it off its path, as in the 1998 films Deep Impact and Armageddon. Ron Perlman is a hoot as the iron-jawed astronaut who volunteers to man the suicide mission. However shortly after lift-off, his mission is aborted, and he returns to Earth. This is because Peter Isherwel’s Elon Musk-like billionaire, being a major campaign donor, has the ear of the President. The scientists at his company have discovered that the comet contains trillions of dollars-worth of rare metals. He has convinced the President that it is preferable to merely break up the huge core rather than totally destroy it. The fragments supposedly will fall into the oceans where they can be mined. But will his plan work? Some scientists complain that the data underlying his claims have not been reviewed by non-company scientists. To counter Kate’s campaign to awaken the public to the danger that is becoming visible as the comet draws closer to Earth, the President and Isherwel counter with the mantra that becomes the name of the film, “Don’t look up.” Crowds of demonstrators face one another, one group urging the others to confront the scientific evidence, the other yelling “Don’t look up!”

The story’s stark culmination might remind you a little of the bleak outcome of Stanley Kubrick’s Dr. Strangelove. Included are a breakup of Randall’s family because of his infatuation and giving in to the blandishments of Brie Evantee; Kate’s falling in love with a skateboarder named Yule (Timothée Chalamet); and the eventual reconciliation of the film’s heroes who gather for a family meal on the night of their extinction. This meal of reconciliation is highlighted by a prayer of thanksgiving that at least one critic called the most moving moment in the film—and I would certainly agree.

This is a film in which at first we think at its conclusion the bad guys are getting away with their selfish plans, but then something unexpected, and gruesomely funny, changes everything. As you sit a moment with the end credits rolling, do not get up right away, as there is one more short scene involving the President’s son.

Director/writer McKay skillfully entertains while satirizing the large segment of the public that reject or ignore the scientific facts–whether it be climate change, the Covid pandemic and vaccinations, or the outcome of the last national election.

Many of us do not want to accept what is unpleasant or contrary to our beliefs, as Jeremiah discovered in his day when he obeyed God’s call to prophesy the doom of Jerusalem. Ridiculed, beaten, jailed, he nonetheless persisted—and the Assyrians descended upon Jerusalem to destroy it, just as centuries later the comet descends upon Earth as our heroes had predicted. And to his credit, McKay skewers the media as well as the public. The silly concern over the love affair of two famous twits is just a tad exaggeration of what has happened to the once majestic Today Show where the opening news segment seems to be wedged into segments of fawning over celebrities and the pushing of products and gadgets. Ours is a crazy world, and the advance of technology, the filmmaker seems to be saying, gives the crazies enormous damage to wreak havoc.

With regard to G. A. Studdert-Kennedy’s great poem, it’s original title of “Indifference” is an apt description of the attitude of many who, in addition to deniers, are a menace to society. There are bills to pay, appointments to keep, and other minutia of daily living to tend to, so leave concerns over climate change or political reform to the worry warts yakking away on the cable channels. Thus, we need such calls as Adam McKay’s to look up and pay attention.