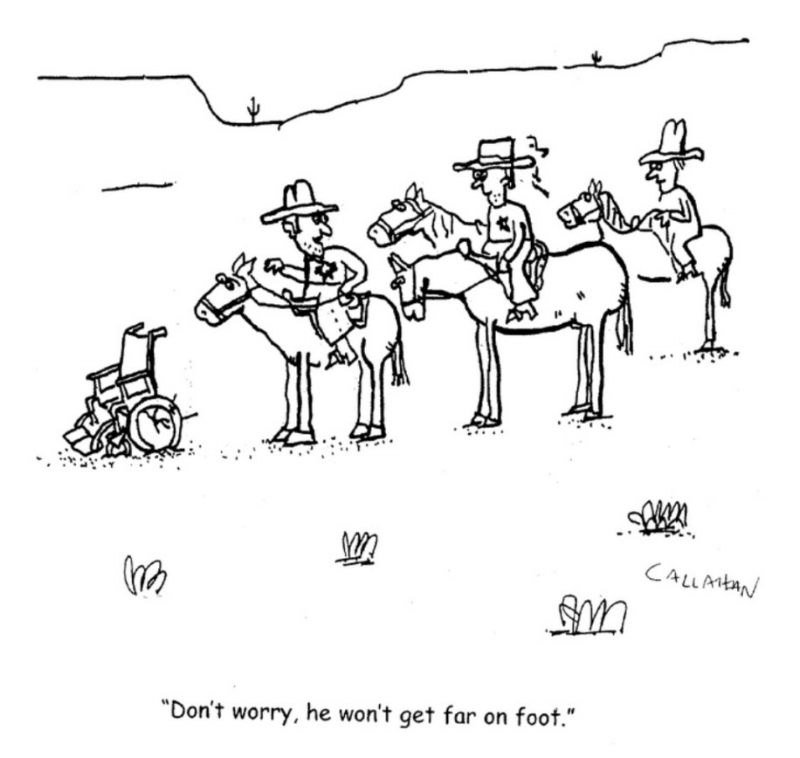 Immediately the father of the child cried out, “I believe; help my unbelief!” 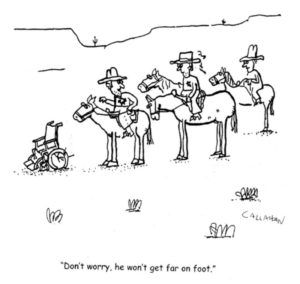 What a delightful visual parable of reconciliation from director and screenwriter Gus Van Sant! Based on John Callahan’s autobiography of the same name, the title comes from one of the sardonic cartoons that made Callahan beloved and controversial. His story is both a recovery tale (the 12 Steps of Alcoholics Anonymous are central) and a spiritual journey to reconciliation and self-love.

Paraplegic Callahan (Joaquin Phoenix) himself tells his story—from two points in time, before an attentive audience in a Portland auditorium and to fellow alcoholics at an AA meeting. The latter is presided over by the gay Donnie (Jonah Hill) so effectively that many regulars have asked that he mentor them in special sessions. Callahan joins them at the wealthy Donnie’s home, where the latter affectionately calls them his “piglets.” Here the other members often interrupt and sharply question Callahan, none of them willing to put up with any of his self-pity or excuses.

John reveals that even before his auto accident he had abused alcohol, dating back to his 13th year. He was angry and felt abandoned by the mother who gave him up for adoption, and so he rebels against his adoptive parents and their church. He was 21 when he attended a party with his fellow skirt-chasing friend Dexter (Jack Black) for a night of heavy drinking. They were in his friend’s VW Beetle on their way to another party where they hoped to find more willing female conquests when the drunken Dexter plowed into a post. We don’t see the crash, just its aftermath when John wakes up in a hospital. He is paralyzed but the man responsible for the crash escaped with a few scratches. John is bitter over this, resorting to alcohol even more for escape from his confined life. There are those who seek to help, such as the Swedish volunteer physical-therapy volunteer Annu (Rooney Mara), who as part of an effort to regain his sexual drive becomes his lover, but she disappears for a long time before she re-enters his life, presumably because she has become an airline stewardess.

John turns his doodles into cartoons for the University newspaper, thereby discovering his vocation. Because they are so often politically incorrect in their lampooning of society’s absurdities, some people are taken aback and even angered by them. Members of the editorial board are not sure how to handle him, and John soon finds his work a home in the Oregon newspaper the Willamette Week. Poking fun at Klansmen, pedophiles, Darwinism, and even paraplegics, his cartoons continue to delight and enrage his readers. One of them in which we see a prehistoric animal morph into a man standing at a podium is captioned, “I’d like to thank all those who made it possible for me to be here tonight,” is echoed near the end of the film when John speaks to an audience, among which are his fellow AA members.

The scenes in which John turns to Donnie for advice and support are very meaningful, Donnie obviously influenced by Chinese philosophy and Christianity. Stressing the Second Step in which the alcoholic must believe in a Power beyond him or herself, he urges John to recover his belief. John struggles with this, eventually experiencing a vision in which his mother assures him that he is a good person. Later Donnie says that helping a person find faith is hard. Along the way John is led to realize that he must forgive people in his past, and so he seeks out his adoptive parents from whom he had fled. He even looks up the man whom he has blamed for his paralyzed condition. This scene with Dexter is one of the most powerful moments of reconciliation you are apt to see in a film! Last of all, Donnie leads John into an awareness that he must also forgive himself. Jonah Hill so skillfully portrays the long-haired amateur therapist that Donnie’s character is as memorable and just about as important as John’s.

Gus Van Sant, who also directed the film about another outsider, 2008’s Milk, helps us understand John’s frustration, as in the scene in which the paraplegic desperately seeks a drink, but one bottle has fallen to the floor beyond his reach, and a bottle of vodka is on an upper shelf just beyond his reach. The director also employs humor that conveys the outlook of his subject by frequent use of his cartoons, some of which become short animated clips. All the actors are superb, from Joaquin Phoenix, who demonstrates why he is considered one of our finest actors, to Jonah Hill as his mentor and Jack Black as the wayward friend whom he forgives. This is sure to be on Visual Parables Top Ten list early next year. The intimate scenes with a nurse and Annu, in which John puts into practice the advice of his sex therapist, make this a risky choice for use in a religious group, but with advance preparation, I believe such groups will be all the richer for discussing it.

%When the alcoholic John Callahan is paralyzed in an auto accident, his road to recovery includes spiritual guidance from his AA mentor & his becoming a controversial cartoonist.
Editor Rating ★★★★★4.5 out of 5
More Details