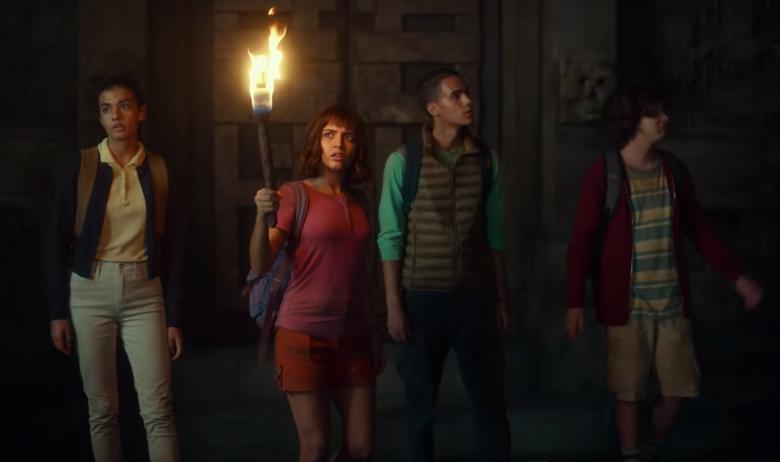 Treasures gained by wickedness do not profit, but righteousness delivers from death.


For where your treasure is, there your heart will be also.

My children having long flown the coop, I have never seen any of the episodes of the popular “Dora the Explorer” Nickelodeon cartoon that debuted in 2000. And yet I enjoyed the sometimes over the top movie adventures of this spunky Latina heroine—indeed, her ethnicity was for me one of the film’s major attractions.  Almost as good as seeing an African American Spider Man.

16-year-old Dora (Isabela Moner) has been raised in the South American jungle by her explorer/scientist parents (Eva Longoria, Michael Peña), so she is dismayed and apprehensive when they send her to Los Angeles to live with her cousin Diego (Jeff Wahlberg) where they will be attending high school. She would much prefer to remain with her parents because they are setting forth to find the legendary Incan city of Parapata. However, the search could be dangerous, plus it is time for her, home schooled by herself for so long, to learn to socialize.

“Be yourself” was their parting advice. The eager, overly optimistic girl finds that to be a problem, as when she does a solo dance at a school gathering that totally embarrasses Diego so that he tries to keep her at a distance. Class president Sammy (Madeline Madden) perceives the smart newcomer as a threat, and so it is only class nerd Randy (Nicholas Coombe) who is drawn to her. Compared to the jungle, high school proves to be a more dangerous environment for Dora, though she does have her pet monkey Boots with her still.

However, when treasure hunters kidnap Dora to use her for locating her parents, the girl finds herself back in South America. Kidnapped with her are Diego, Sammy, and Randy. After they are rescued by  a mysterious stranger, Alejandro (Eugenio Derbez), the five strike off into the jungle in search of Dora’s parents, who have broken off phone contact. It is easy to guess who the uneasy outsiders are now and who the confident one, at home in her  familiar surroundings.

Isabela Moner is perfect as the always optimistic, no matter what, heroine who never gives up. She is naïve perhaps in a North American high school, but never defeated by her failures, nor does she become embittered or seek vengeance on those who put her down. It is fun when she speaks directly to us at times, bringing us into her joke. Dora’s ethnicity is another plus, making this an enjoyable variation on the old King Solomon’s Mines jungle genre.  Indiana Jones would have loved her.

Dora & 3 HS friends escape from kidnappers who want the Incan treasure her parents have found in a South America jungle.
Editor Rating ★★★★★4 out of 5
More Details