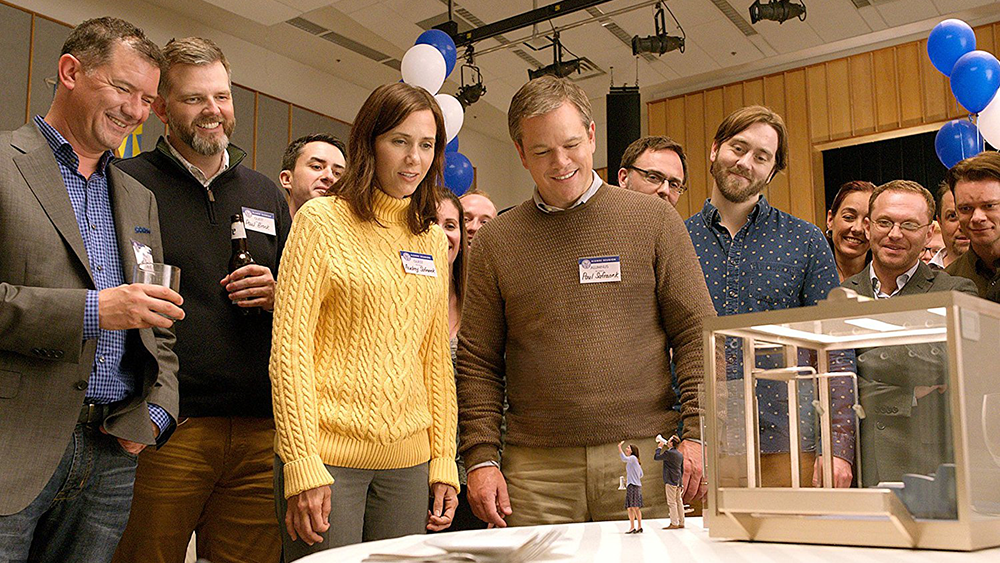 Since there will never cease to be some in need on the earth, I therefore command you,

‘Open your hand to the poor and needy neighbor in your land.’

Is not this the fast that I choose:
to loose the bonds of injustice,
to undo the thongs of the yoke,
to let the oppressed go free,
and to break every yoke?

Is it not to share your bread with the hungry,
and bring the homeless poor into your house;
when you see the naked, to cover them…

Director Alexander Payne and his co-writer Jim Taylor (who gave us the excellent Sideways, About Schmidt; Election; and Citizen Ruth) are in top form in this science fiction parable about overpopulation that turns into a tale of sacrificial commitment to others. I thought that I had VP’s Top Ten Films list completed until I saw the film this afternoon. Opening to mixed reviews, Downsizing has been overshadowed by action and horror blockbusters, despite Matt Damon’s and Hong Chau’s fine performances. In 1989 the process of downsizing was played for comedy in Honey, I Shrunk the Kids, but the makers of this more serious film, though inserting some social satire, is more interested in the way the hero reacts to his strange circumstances, his story being that of a journey from ease and leisure to a life of concern and commitment.

As shown in the first few minutes Norwegian scientist Dr. Jorgen AsbJornsen (Rolf Lassgard) has perfected the process of downsizing people in response to the world’s population explosion. Five-inch tall people not only take up less space and generate a smaller quantity of waste, but they can also live far more cheaply in colonies set aside for them. Paul Safranek (Matt Damon) enters the picture over 15 years later when the shrinking process has been so commercialized that the company uses the same Madison Avenue tactics once used to induce people to buy a time-share condo or sign up for an expensive cruise.

Paul (Damon) is an occupational therapist at an Omaha steak packing factory who obviously enjoys the job of helping workers with their physical pains. However, his personal life is consumed by the care for his dying mother, forcing him to give up his ambition to become a doctor. Years after her death, he marries, and he and his wife Audrey (Kristen Wiig) are thwarted by a bank when they apply for a loan to buy a bigger house.

Their high school reunion is the turning point, thanks to the arrival in a glass box of Dave and Carol Johnson (Jason Sudeikis and Maribeth Monroe), who have gone through the downsizing procedure. The tiny couple boast how great things are living in a community for small people called Leisureland (in New Mexico) where they can afford a mansion. The Safraneks sign up for the procedure, going ahead and closing a deal on a lavish McMansion house in Leisureland. However, Paul wakes up in the recovery room alone, promptly receiving a telephone call from his tearful wife at the airport informing him that she has backed out because she cannot bear to leave her family and friends behind.

Paul feels abandoned, the process being irreversible. His heart feels as empty as the huge house that he walks through on his day of arrival. A year goes by, and he is now living in an apartment below two wealthy Europeans whose quarters are far bigger and who love throwing lavish, wild parties. He has signed the divorce papers (played for a chuckle because of their large size compared to him and thus the lawyer’s request that he make his at first tiny signature bigger). Probably because of the terms, he has to work as a telemarketer, even though he is living in Leisureland. After a failed romance with a single mother, he accepts the invitation of his upstairs neighbors Dusan and Joris (Christoph Waltz and Udo Kier) to join their wild party. After a night of drinking, flirting with scantily clad women, and ingesting a drug from one of them, he wakes up on the floor the next morning.

Dusan and Joris emerge from their bedroom just as a team of women arrive to clean up the mess. Paul notices that one walks with a limp, quickly recognizing that he had seen her on TV. She is Ngoc Lan (Hong Chau), a Vietnamese dissident, downsized as punishment by her government. She had been smuggled into this country in a box, along with 17 others. They had died, and she had lost her lower leg. Lan might speak in a high-pitched broken English, but in a tone that expects to be obeyed. After keenly watching her move about the apartment, Paul talks to her about his experience as a therapist, informing her that the prothesis is fitted wrong and will lead to further injury. She, assuming that he has more medical knowledge than he really does, persuades him to come with her to visit a friend who is slowly dying.

Paul (and we) are astonished by their van trip through a huge wall that separates the palatial homes of Leisureland from the tall, Soviet Era-style apartment buildings where the service people of Leisureland are forced to live in squalor. None of this had ever been hinted at in the ads and the tour of this supposed utopia built under a vast canopy that protects the community from the larger world. It becomes apparent that Lan, bringing back containers of left-over food, is sort of a Mother Teresa to some of the ghetto dwellers. After handing out food, she conducts Paul to her apartment where, despite his protests, she orders him to tend to the sick woman. He is able to offer just pain pills and advice to keep turning her so as to avoid bed sores. He then tries to repair Lan’s prothesis, but manages only to break it so that she can no longer use it.

In retribution Paul joins Lan’s cleaning team, much to the amusement of Dusan and Joris when the team cleans their apartment. The two still regard him as a friend, inviting him to join them on a voyage to visit the original colony of small people in Norway. Lan insists on coming too, overcoming their objections by revealing that Dr. Jorgen AsbJornsen, the scientist who had founded the colony, was one of many admirers of her work and had invited her to visit him when possible. This will lead Paul to make a decision even bigger than his choice to become small, complicated by his growing romantic love for Han during the ocean voyage to Norway.

I loved the unexpectedness of several plot developments, which changed the tone of the film from light satire to serious confrontation with classism and decision-making. We also see in a lively church scene that Lan’s activism is motivated by her Christian faith. What a contrast between the scene of singing and clapping and the grimness of the large ghetto where the poor huddle around fires and the children’s main source of recreation seems to be sliding down home-made slides. The depth of Lan’s new-found love for Paul is revealed when, upon their parting, she places in his hands her well-worn Bible as a remembrance. Soon comes decision time for Paul. Shall it be safety or sacrificial service?

While the film is still available, at least in the cheap seat theaters to which it has been relegated, I urge you to run out and take it in so that you can see it on the large screen that it deserves. It is by no means a perfect film, but it is one to make us reflect on our world and its problems, suggesting that the Christian faith ought to be more than the quest for personal salvation as represented by so many TV preachers. The words of Washington Gladden’s great hymn certainly apply to Lan: “O Master, let me walk with Thee/In lowly paths of service free;/Tell me Thy secret; help me bear/The strain of toil, the fret of care.” Perhaps in whatever future awaits him, they will apply to Paul as well.

This review with a set of discussion questions will be in the February issue of Visual Parables. If you find this review helpful, please help us out by ordering an issue or a year’s subscription at The Store section of this site.

A sci-fi tale of the miniaturization of humans to combat overpopulation starts as social satire, but changes tone when climate change threatens to end life, the hero having to choose between safety or sacrificial service of others.
Editor Rating ★★★★★4.5 out of 5
More Details