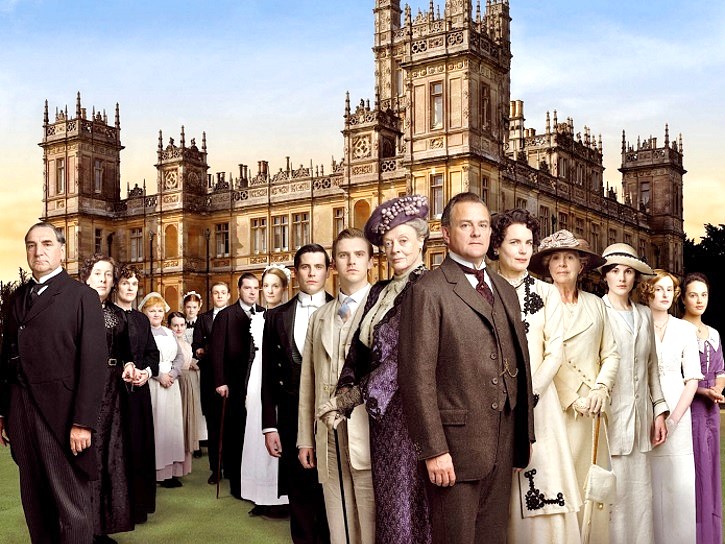 Slaves, obey your earthly masters with respect and fear, and with sincerity of heart, just as you would obey Christ.


There is neither Jew nor Gentile, neither slave nor free, nor is there male and female, for you are all one in Christ Jesus.

Julian Fellowes’ beloved characters are back, and thanks to the giant screen, bigger and bolder than ever. Judging by the enthusiastic audience at the advance screening I attended, the film should be a big hit, at least for that part of the populace that tunes in to the many PBS series about the British upper class. The film opens with a car moving up a long driveway, and at the point where the magnificent Abbey comes into view, many in the audience joined in applause. The driver, of course, bears an important message for the manor’s occupants. Soon we are laughing at the delightful barbs of matriarch Violet Crawley (Maggie Smith), loudly and heartily. Fellowes has stuffed enough subplots into the next two hours to fill a whole regular season, were they to be explored in any detail.

Time has moved on from when the TV series ended: the film begins in the year 1927, and the messenger in that car is bringing the news that King George V (Simon Jones) and Queen Mary (Geraldine James) will be coming to stay for a night on a tour of Yorkshire that will include a stayover with their daughter Princess Mary (Kate Phillips) and her husband Lord Lascelles (Andrew Havill) at nearby Harewood House. Robert (Hugh Bonneville) and Cora (Elizabeth McGovern) receive the surprising news with good grace, and the servants with great excitement. Mr. Carson (Jim Carter) is even brought out of retirement when the Crawley’s worry if his successor, the once nasty Thomas Barrow (Robert James-Collier), is up to the demands required of a butler hosting royalty.

Some of the interwoven plots include:

-a visit from a sinister stranger who thinks that Irish former-chauffeur Tom Branson (Allen Leech) might help in an assassination plot;

-a rebellion by the servants when the arrogant Royal staff and chef barge into Downton to usurp their roles;

– cook Daisy (Sophie McShera) and footman Andy (Michael Fox) have pre-wedding jitters troubled by the handsome plumber called in to repair the boiler—and jealous Andy ruins the repair work so that the Abbey has no hot water;

-Lady Edith (Laura Carmichael), revealing that she is pregnant and concerned that her husband’s scheduled royal trip will mean he will not be present when she gives birth;

-butler Thomas Barrow’s sneaking off for a rendezvous with a gay member of the royal entourage and getting arrested when the police raid the jazz club;

-an inheritance battle involving Violet and her estranged cousin and a family member whose identity has been kept secret;

-a series of missing small items around the house, stolen by an unknown thief;

-and a disturbing announcement from the Dowager Countess (Maggie Smith).

The splendor of the Abbey and of the aristocratic lifestyle are enhanced by the big screen. The royal inspection of the troops and the lavish banquet, with the elite unaware of the struggle between the two sets of servants that has gone on in the Abbey’s lower depths—all will gladden the hearts of fans. There are many moments of grace that illustrate the loving or loyal relationships among the characters. One touching one involves cook Mrs. Patmore’s (Lesley Nicol) visit to the village grocer who has already stacked up the various expensive foods that he anticipates she will be needing. She does not reveal that the Royals have already brought their own stock of food and intrusive staff that will displace hers. She leaves with the supply, telling her companion that she does not want to disappoint the tradesman because if she canceled the order, he would lose face in the village. No wonder, with so many details of the various relationship unfolding, that this series has earned such a loyal posse of viewers.

It has sometimes been observed that there is irony in that we Americans, citizens of a democracy that stresses equality, should be so drawn to British dramas centering on the nobility. If we think much about this, we might realize that Downton Abbey is to the old British aristocracy what Gone With the Wind is to slavery—a fantasy filled with engaging characters that can make us, for as long as we don’t think about it, forget the terrible inequality of the past. Well, not entirely, because Fellowes, more astute than Margaret Mitchell, is well aware of this inequality and thus provides us enough incidents in which it is questioned. In one scene Robert Crawley talks about the need for continuing the expensive maintenance of the Abbey because of its economic importance, not just to the large servant staff, but to the villagers and farmers as well. In one scene he and other family members even venture out into a rainstorm and labor along with servants to complete a necessary task.

Thus, I think the series depends a lot on what we bring to it, much like Christianity has been involved with the subject of slavery. On the one hand, there are many passages, such as the one quoted above that support slavery and later, segregation, and there are a few, such as the Galatians passage, that support the equality of all races, classes or sexes. Such is the depth of British classicism that the servants often resent anyone who tries to cross the line between served and servers. Much as many slaves, who from white preachers heard too many sermons based on the many New Testament passages urging slaves to obey their masters do that they never questioned their status, so did much of the British populace at that time.

Fellowes seems to leave open the possibility of a sequel. I for one hope that he is working now on the next installment. His insight into human nature is so wholesome—I like the lovable fool that is the least admired and who gets the greatest laugh, Mr. Molesley (Kevin Doyle), but who is later affirmed. As with Mary’s song in the Gospel of Luke, the high are made low and the lowly lifted up. This is one of those films not to be missed.

This review will be in the October issue of VP along with a set of questions for reflection and/or discussion. If you have found reviews on this site helpful, please consider purchasing a subscription or individual issue in The Store

All our favorite characters are in this big screen version of Downton Abbey with so many subplots that I wish it could be a series again.
Editor Rating ★★★★★5 out of 5
More Details