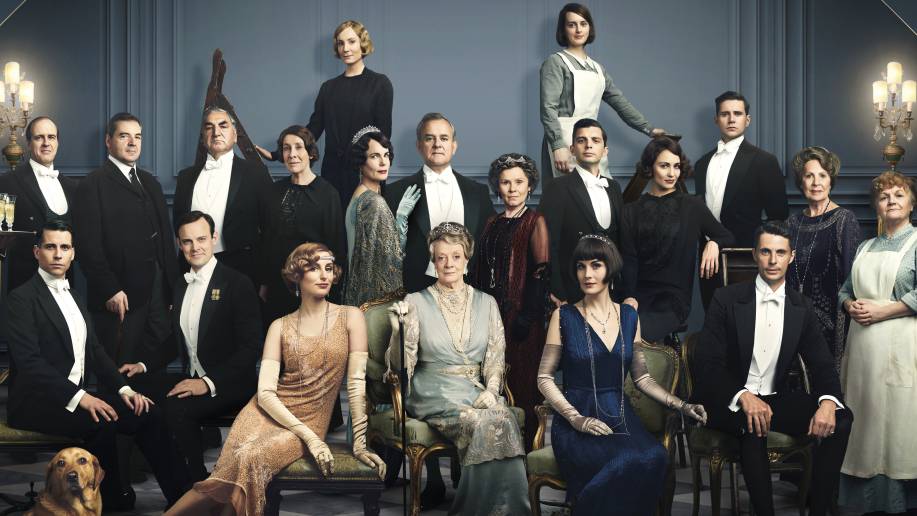 Let me say right up front that this addition to the Julian Fellowes’ franchise ought to please fans of this beloved series. In fact, thanks to the story line unfolding at the magnificent estate itself, it is better than the previous enjoyable 2019 film. All our beloved characters are back, and most of the new ones introduced are equally interesting.

The film starts off two years after the previous film, with the 1930s looming ahead. Violet Crawley (Maggie Smith) has been informed that she’s inherited a valuable villa in the south of France from an ex-lover the Marquis de Montmiral, with whom she had spent a romantic week before either of them had married. However, the widow (Nathalie Baye) is disputing the will. Thus, because she cannot travel due to her failing health, her son Lord Grantham (Hugh Bonneville), Cora (Elizabeth McGovern), and Lady Edith (Laura Carmichael), travel to that sunny land along with some of the house staff, to discover more of the Dowager Countess’ hitherto unknown past.

They are happy to be out of the house because it is becoming crowded with members of a film company and their bulky equipment. The British Lion Film Corp. wants to shoot a silent feature to be called The Gambler at the picturesque Abbey, much to the distress of Lord Grantham and, of course, Lady Violet. The practical-minded Lady Mary (Michelle Dockery) shows her father the leaks in the roof, explaining that the location fee will pay for the expensive roof repairs, so he reluctantly assents to what everyone regards as an  intrusion. Thus we switch back and forth between Downton and the villa in southern France to follow the ups and downs of a myriad of characters.

Leading the film crew are Jack Barber (Hugh Dancy); Guy Dexter (Dominic West); and Myrna Dalgleish (Laura Haddock—respectively the film within a film’s director; its vain heroine; and its dashing leading man. Dexter becomes drawn to Lady Mary when she steps in to save the film from disaster—as you will see, the film borrows from the plot of Singing in the Rain. Meanwhile in sunny France Lord Grantham has to deal with his mother’s past that reflects badly upon himself.

Of course, there are lots of subplots involving the loyal staff. It is necessary to have seen the original series to fully appreciate the story of butler Thomas Barrow (Rob James-Collier) and his journey from evil schemer footman to morally rehabilitated successor to Mr. Carson (Jim Carter). A closeted gay man, will Barrow find true love when an overture is made to him by someone who can easily support them both? Also, those who have enjoyed the bumbling escapades of would-be butler Mr. Molesley (Kevin Doyle)will enjoy what happens to him. As a result of the subplot involving Barrows Mr. Carson will emerge from retirement. Before this he gets the line that Americans will best enjoy, saying as some of the Crawleys leave for France, “They better be warned: the British are coming.” Most dramatic and tear-inducing for fans will be the fate of Dowager Violet Crawley, with Maggie Smith milking every second of her climactic scene, ably assisted by her once foe, now chum Cousin Isobel (Penelope Wilton).

Devoid of virtually any criticism of the social and economic inequalities of early 20th Century British society, this lush fantasy continues to entertain. The lower class servants continue to serve just as loyally as the “darkies” do in the American fantasies glorifying the Old South and the Lost Cause. Thus, I feel that enjoying Fellowes’ creation is a guilty pleasure, but one that I probably will enjoy as long as he scribbles out more sequels. It may be “a new era” in the film, but the old social stations are maintained (though with some modifications)—wealth & gaiety for the privileged few and loyal acceptance of their servitude by those beneath them. Care for tea, anyone?

Several Crawleys travel to France in regards to a villa Violet has inherited, leaving others to cope with chaos, created by a UK film crew.
Editor Rating ★★★★★4.5 out of 5
More Details