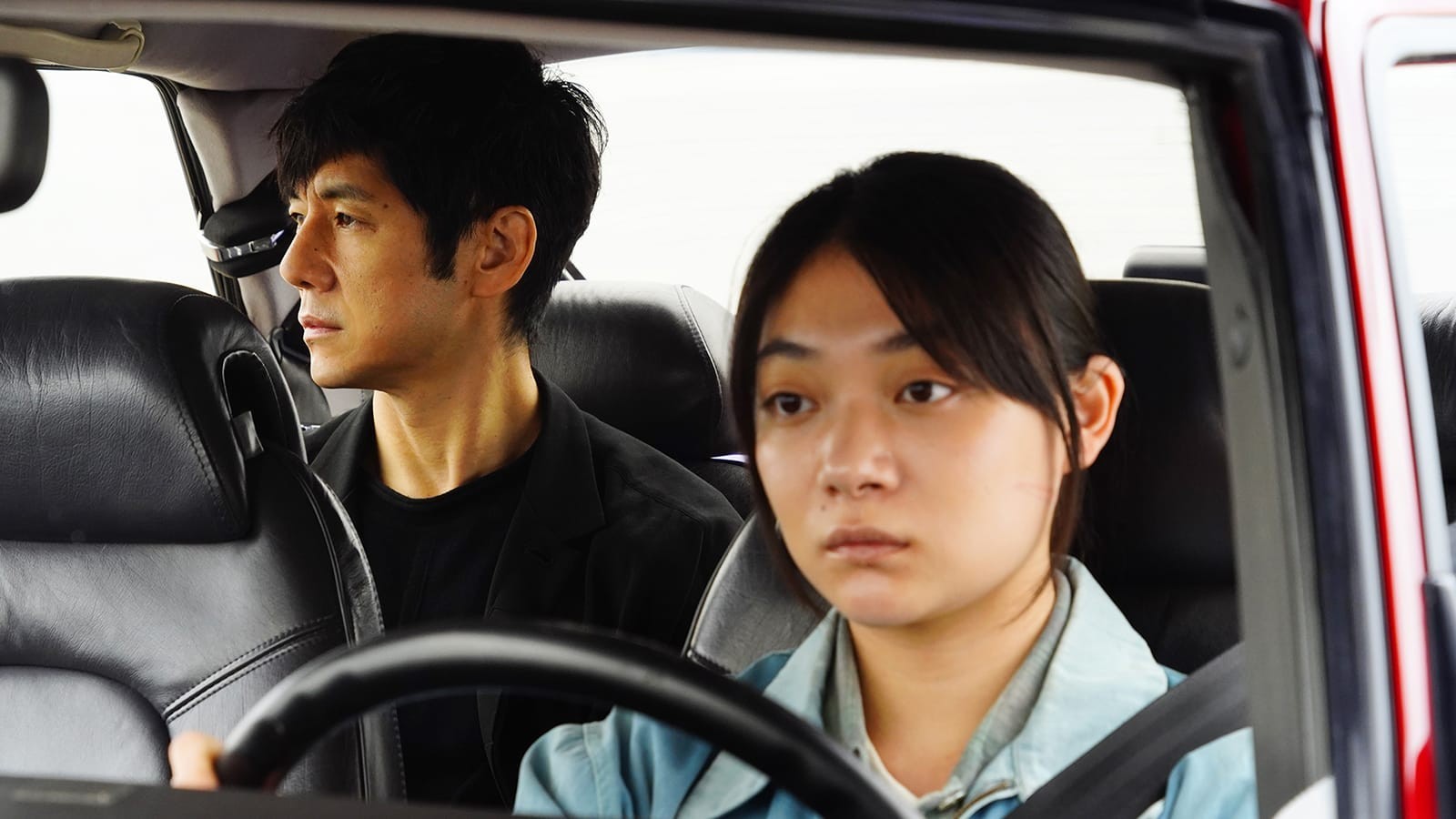 My heart is stricken and withered like grass;
I am too wasted to eat my bread.


Why are you cast down, O my soul, and why are you disquieted within me? Hope in God; for I shall again praise him, my help.

This film of bereavement and guilt was adapted by director Ryûsuke Hamaguchi and co-writer Takamasa Oe from a short story of the same name by Japanese author Haruki Murakami. The original story might be short, but the film definitely is not. It will tax the patience of those used to a cinematic diet of Marvel films, but like a Terrance Malik work, it will be food that “sticks to the ribs.” The film is almost three hours long, and the opening credits do not appear until the 40-minute prologues reveal what an unusual creative process theater director Yûsuke Kafuku (Hidetoshi Nishijima) and screenwriter Oto (Reika Kirishima) shared during their happy marriage up to her death. Engaging in frequent sex, she would share a plot from a dream and Yûsuke would help her remember afterwards and work out the details. She was an enigma in that she truly loved him yet had affairs with other men.

Yûsuke had walked in on one of her trysts, but the pair had not noticed. He had left without interrupting them. Nor did he bring it up later. One morning, as they part, Oto tells him she wants to talk with him that night. His biggest fear had been losing his beautiful wife, so he stays away until late that night. When he enters their apartment he finds her lying on the floor, her death caused by a brain hemorrhage. This is the second death in his family, the couple having lost a young daughter a couple of years earlier. With this added sorrow, he is not able to continue with his work, an adaptation of Chekhov’s Uncle Vanya in which he is both directing and starring.

Yûsuke drops off the map for two years, until the directors of a theater festival in Hiroshima invite him to be their “artist in residence.” His task—to direct a multilingual version of a Chekhov play—of Uncle Vanya, of course. Because he chooses a retreat for lodging that is almost an hour from the theater, the managers require that he accept a chauffeur—for “insurance purposes,” they explain—and it is not negotiable. Very reluctantly, Yûsuke agrees to turn over his keys of his beloved 15- year-old red Saab 900 Turbo to the shy young woman Misaki (Toko Miura). The two engage in almost no conversation at first because Yûsuke recites the lines of the main character of the play using a cassette tape on which his deceased wife had recorded the lines of the other characters. He has so paced the play that his readings fit precisely into the silences of the tape. This might seem rather ghostly, and the director at least has the courtesy to ask Misaki if she minds, which she does not.

The actors who turn up for the audition are deliberately from different nations because the director wants to emphasize the universal nature of Chekhov. One of them is Takatsuki (Masaki Okada), the lover of his late wife. Equally surprising is the mute woman Sonya (Park Yoo-rim), who communicates in Korean sign language. Others speak Chinese and Japanese. At least one of them speaks just one language, so Yûsuke will have to help the actors he eventually chooses to communicate with each other. To everyone’s surprise, the director does not assume the lead role himself, but chooses Takatsuki, despite his youth and limited ability. The once popular young actor had  fallen onto hard times because of a scandal, and had showed up hoping for a supporting role. Yûsuke’s motive—revenge, wanting to embarrass the actor if he f ails?—is unclear.

The two developments that occur over the weeks of rehearsal involve the actor who had cuckolded Yûsuke and his taciturn driver. Takatsuki a couple of times asks to meet with the director to talk. We wonder if he wants to lessen a feeling of guilt by confessing his adultery, but, though he seems to comes close, he doesn’t. However one of his observations is worth thinking about:

“But even if you think you know someone well, even if you love that person deeply, you can’t completely look into that person’s heart. You’ll just feel hurt. But if you put in enough effort, you should be able to look into your own heart pretty well. So in the end, what we should be doing is to be true to our hearts and come to terms with it in a capable way. If you really want to look at someone, then your only option is to look at yourself squarely and deeply.”

Yûsuke says little in return. His impassive face reveals almost nothing of whatever he is feeling inside, nothing of whether he either hates or has forgiven the man who has cuckolded him.

However, the director’s relationship with his driver does turn positive as they actually begin to converse. As Yûsuke begins to share a little of his painful past, Misaki also opens up, bit by bit revealing a past of poverty, parental abuse and tragedy. Her mother died in their shanty when a storm came up causing a landslide that buried it. Misaki, then a little girl, had stood on the hillside looking at the ruins but did not go down to see if her mother was still alive, just as Yusuke had not tended to his fallen wife right away. Misaki, after driving Yûsuke around to see some of her favorite sights of the city, also gives in to his request that she drive him to visit her far away home.

We know that barriers are coming down when Yûsuke climbs into the front seat of his car instead of the back. Both smoke, though not, under his orders in the car, so when they each light up a cigarette, they hold up theirs through the car’s sun roof in between puffs. A highlight of the movie is the close up of the two little cylinders, their tips burning bright red against the night sky, as the travel along. There is distance between them, but even more, a sign of their unity, of their companionship.

Even more moving to me is the scene at the end of the film, one from the play Yûsuke has been preparing, and in which Sonya recites in sign language the line which has been repeated, at least partially throughout the film during rehearsals. First, I have to reveal that Takatsuki leaves the play, and if it goes on, Yûsuke must step in and take on the lead role. And so, it is not just to the stage Uncle Vanya that the words are directed, but to Yûsuke and to Misaki (to whom the camera cuts to in the audience) that the words are directed. The quote below is half of Sonya’s speech, which I am sure was shortened in the film:

What can we do? We must live our lives. [A pause] Yes, we shall live, Uncle Vanya. We shall live through the long procession of days before us, and through the long evenings; we shall patiently bear the trials that fate imposes on us; we shall work for others without rest, both now and when we are old; and when our last hour comes we shall meet it humbly, and there, beyond the grave, we shall say that we have suffered and wept, that our life was bitter, and God will have pity on us. Ah, then dear, dear Uncle, we shall see that bright and beautiful life; we shall rejoice and look back upon our sorrow here; a tender smile—and—we shall rest.

As can be seen by this, and even more in the full version of her speech, Sonya is speaking more than a stoic, bravely enduring suffering; she is one who is voicing hope, hope based on a faith that there is life beyond life, that the suffering and injustices of the present world are enveloped by a universe ruled over by a God of mercy and love. I am not sure that the filmmaker or the characters fully share this faith, but that the film repeats parts of this speech several times indicates they want us to take in as much of the message as we can accept.

The deaf Sonya signing the speech as she stands behind Yusuke’s seated Uncle Vanya for me is one of those great moments in cinema that I will always cherish. Communicating through her graceful hands and her facial expressions, she conveys the message in a more powerful way than could a speaking Sonya. This is one of those films that rewards patience and openness. May it do well on Oscar night!

A sorrow-ridden director comes to Hiroshima to stage Uncle Vanya & his exchanges with his bereaved driver help them both to heal.
Editor Rating ★★★★★5 out of 5
More Details