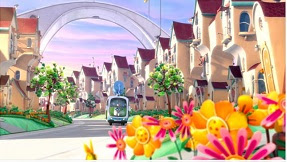 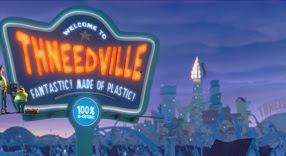 In Thneed-Vill nothing grows because of human greed–all plants are plastic.
﻿

Although both the book and the film version of Dr. Seuss’ The Lorax are intended for children, the city of Thneed-Ville in them is a dystopia almost as grim as those found in adult tales, even though it is a colorful place. However, the colors are all artificial, even the trees, flowers and and lawns made from plastic. No living plant grows in the city because they were destroyed by a greedy inustrialist!

Both the story’s environmental message and its concept of a dystopia show how respectful Theodore Geisel was of children and their budding intellectual ability. As I watched this pleasing adaptation unfold on the big screen, images of other dystopias crowded into my mind, some of which I think might be interesting to you too. Why? Because writers/filmmakers use the concept of dystopia as a means of warning their audiences of something in society, some trend or set of values, that is dangerous. A dystopia story is thus a cautionary tale designed to forestall a perceived calamity if a current trend or policy in society is allowed to go on to its logical conclusion.

1984. George Orwell in 1948 foresaw that in the Cold War struggle both sides were using tactics that would lead to the loss of freedom of thought and action if allowed to go on unchecked. The Soviets had gone down the path of totalitarianism further than the West, but he saw in the mounting use of secrecy, spying, lieing, and debasing of language that the US and British governments were engaged in that the two opponents might eventually be indistinguishable. remember, this was the beginning in the USA of the Communist witch hunts that lead to so many liberals being blacklisted. There were two excellent films based on the novel, one black and white version in 1956, and another, in color in the actual year of 1984, and with a distinguished cast that included Richard Burton and John Hurt. Then, and now, history was different from what Orwell predicted, but his “Big Brother” remains in our lexicon–and a threat as government continues to increase its power. (I should also mention here the 1954 animated version of his fable Animal Farm exploring the same themes, with it’s memorable Double Speak quote, “All animals are equal, but some are more equal than others.”)

Fahrenheit 451. The censuring of what we read has been around since the days of the Inquisition, nor did it go away when the Enlightenment came along. Ray Bradbury was concerned about this issue when he wrote his novel, naming it after the temperature at which book paper ignites into flame. In his dystopia the State, in its controlling of what people think, has banned all books and libraries. The job of the Fire Department is to start a fire (of any book they come across), not to put it out. The conclusion, in which the two protagonists discover an underground of literate resisters who preserve the heritage of civilization by each member memorizing a specific book, is gratifying.

Logan’s Run. In 1976, ten years after the Bradbury film, the movie adaptation of William F. Nolan’s novel addressed the youth craze that began with the genration gap of the Sixties, as well as the issue of environmentalism. Through the misuse of science the outside world had been ruined, but citizens had found refuge in a domed city wher all physical needs were met, allowing people leisure to pursue their own pleasures. The one catch, however, is that, to relieve the pressures of population, the lifespan stops at 30, on which birthday the citizen is terminated in a public semi-religious ceremony called Carousel. Our hero Logan is a Sandman, a policeman charged with catching Runners, those who try to escape their termination because they do not beleive the claim that the terminated are being transported to a better world.

Lord of the Flies.  William Golding wrote his book to refute the shallow liberal view that if only the innocent children of the world could run it, things would be so much better. There have been two film versions of this tale of boys castaway on an island when their plane goes down and the adults are killed in the crash. Peter Brooks directed the 1963 black and white version, and in 1990 it was remade in color. The boys set out as good civilized Englishmen to make the best of their situation, but soon the rational boys are overcome by those led by a bully acting out of fear and lust for power. Neither version fully captured the inner torment of the rational Piggy, especially of the surreal scene in which he hears the Lord of the Flies taunting him, but still the films are worth watching, serving as a reminder that there is that of the savage or darkness within all of us. In the story the lovely island is reduced to a fiery hell on earth before the boys are rescued and returned to a society that also is engaged in a larger war.

In Time. Just out last year, this film is the kind that a group of talented Occupy Wall Street folks might have created if they wanted to spread their message of addressing the inequities of our society. In the future humanity has been gentically engineered to stop aging at 25 years, but then to live for just one more year unless they can acquire more time, time now being the ultimate currency for all transactions. A digital clock has been imbedded on everyone’s wrist, and when the digets counts down to “0,” the person dies unless new time has been acquired by transactions, begging, or stealing. The wealthy live in a special section where immortality is a possibility, whereas others live in a series of time zones made dangerous by desperate people seeking more time. When our worker hero is given another hundred years by a wealthy man whose life he has saved, he begins a series of acts that lead to a rebellion against the unjust system.

WALL-E. Like The Lorax, this is more than just an animated film for children, infused with a profound message and warning, like all good cautionary tales. The little robot that lends its name to the film’s title  continues to function as he was built to do long before the Earth was reduced to a wasteland by humanity’s pollution–gathering and compacting  waste products. Then, through his linking up with a reconnaisance robot named EVE, he and his new companion inadvertantly set out on a mission in which he reconnects with humans and triggers a sequence of actions that will set them free. Humanity has fled the ravaged earth in a huge spaceship that at first seems like a utopia. However, it is a world in which no one walks, humans being so well served by machines that they have grown fat, riding around on chairs when they want to go somewhere, and never having to work for their food because it is prepared and brought to them by robots. Mrs. Obama might well adopt this section of the film as part of her campaign against obesity and for healthful eating.*

The above are but a few of the many dystopia films that talented writers and filmmakers have created over the years. No doubt the dystopia film that is currently on everyone’s mind is The Hunger Games, a tale in which annually a teenaged boy and girl  are chosen from the twelve districts of earth to fight each other to death on live television. (Talk about extreme sports, which brings to mind such sci-fi films as Rollerball, The Running Man and Death Race.) We will begin Part 2 next week with a review of this film, along with brief examinations of other dystopia films such as THX 1138, The Book of Eli
A Clockwork Orange, and more. The dystopia tale is a genre in iteself, one in which the writers and filmmakers serve as prophets crying in the wilderness, warning us with their “Beware!” Although they vary in quality, even the worst of them can trigger thought and discussion about a societal problem that needs attention.

*This portion of WALL-E was no doubt inspired by Jack William’s classic 1947 novella “With Folded Hands” about the unintended consequences of labor saving machines. The robots, created to serve humanity, now force everyone to sit back with folded hands while they meet their every need.