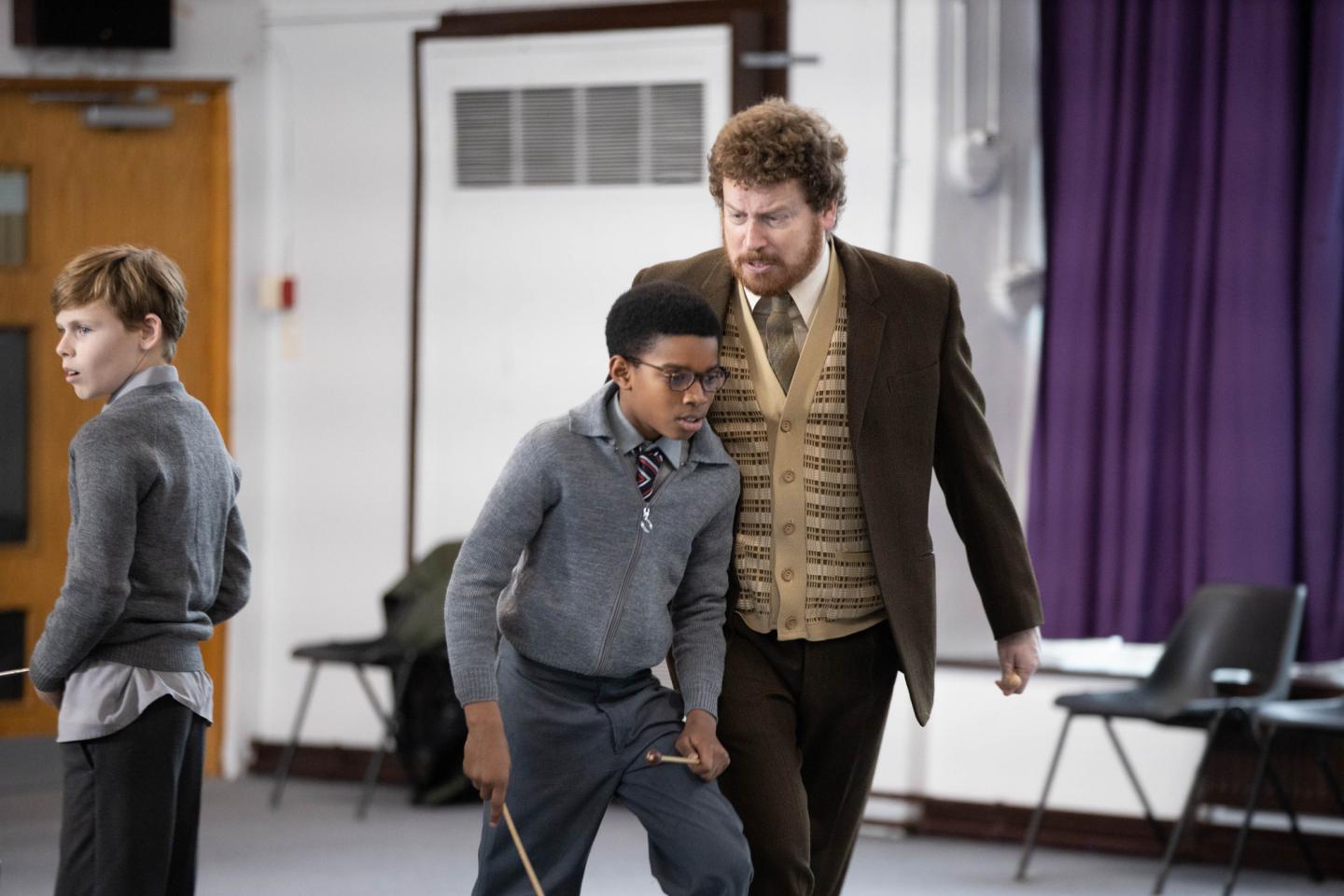 More in number than the hairs of my head
are those who hate me without cause;
many are those who would destroy me,
my enemies who accuse me falsely.
What I did not steal
must I now restore?


The Lord works vindication and justice for all who are oppressed.

Steve McQueen in the previous 4 films of Small Axe has explored the effects of racism in the UK mainly on adults, except for the part of Alex Wheatle dealing with that writer’s childhood. In this concluding film McQueen and co-writer Alastair Siddons focus upon 12-year-old Kingsley Smith (Kenyah Sandy), who at the beginning of the film is in a planetarium fascinated by the projected stars and the Andromeda Galaxy. The boy is interested in rockets and astronauts, and even prays on his knees at night that God will let him become an astronaut.” But there is no one at his school to nurture or guide him to develop this ambition.

In fact, Kingsley is a failure at his largely white school and considered a nuisance by his teachers. He can barely read when called upon in class. As he struggles to decipher a passage from John Steinbeck’s Of Mice and Men, the impatient teacher calls him a blockhead. The other students laugh, but the teacher does not  correct them. Instead of trying to find out why—the child probably has dyslexia—the teacher blames him. In band class Kingsley and another boy misbehave, but it is the Black boy alone who is hustled out of the room.

When the headmaster calls Kingsley’s overworked mother Agnes (Sharlene Whyte) to announce that he is transferring the boy to a special school, she resists for a moment, but when confronted with his low IQ test score, gives in. She is upset that she has had to delay going to one of her two jobs in order to deal with her son’s school problem.

At home Kingsley tells his 18-year-old sister, Stephanie (Tamara Lawrance), who hopes to become a fashion designer, that he has been kicked out and will be sent to “a stupid school.” The next day the boy must endure the humiliation of boarding the bus for the special school at his old school where his former classmates can see him. They know all too well the kind of school he has been relegated to. As an activist says later, attendance at such a school marks one for life, excluding the unfortunate from attending college or obtaining a desirable job.

The school turns out to be worse than expected. Staffed by insensitive idlers who report in mainly for socializing with one another, the children are often left to their own devices in class. One of the girls communicates by barking like a dog. On the playground, at the beginning of recess, Kingsley asks a teacher what he is supposed to do, and she shruggingly responds, “Swing from the trees like you’re back home in the jungle for all I care.” One class is presided over by a slovenly male teacher singing off-key “The House of the Rising Sun” to his guitar accompaniment. It is so terrible that we hope just a clip of the performance will be shown, but the guy drones on and on and on. I suppose the filmmakers want us to really experience the awfulness of the situation—they succeed. The children largely ignore him, each youngster lost in his or her own world.

Kingsley resists returning to the school, but his protests are ignored, as are his complaints to his mother. The one grace note is the bus driver who assists the boy in hiding beneath his seat when boys outside want to taunt him. The story’s turning point is Kingsley’s encounter at school with Hazel Lewis (Naomi Ackie), who claims to be a journalist. Actually she is an undercover activist investigating the racist establishment. Soon her colleague Lydia Thomas (Josette Simon)) comes knocking at Kingsley’s home and informs his mother about the dire conditions at the so-called school.

Agnes does not want  to listen, so the activist, giving her a sheaf of papers and a booklet by Bernard Coard entitled “How the West Indian Child Is Made Educationally Subnormal in the British School System,” leaves. Agnes asks Kingsley if he is learning anything. He affirms what Lydia Thomas has said, so the mother begins reading the booklet, a report accusing the white school system of writing off Black pupils and shunting them off the poor schools where they will never have the chance to go on to college, but instead be trained for menial jobs. She attends a meeting presided over by Lydia and Hazel who point out how the school system has doomed Black children by cultural biased IQ tests and the special schools where children are not taught of value. An old man at the back of the school stands up and sadly admits that he never went to school and thus cannot read or write. However his grandson spent “12 years in school and can’t read or write!” This has a deep impact on all present.

Agnes is convinced, but at home Esmond (Daniel Francis), her husband) who works as a carpenter is not interested in fighting for change. He thinks their son could take up a trade like himself. Fortunately Kingsley’s older sister   Stephanie backs up her mother and brother, so they agree to send the boy to the Saturday School that the activists have organized.

While watching Mrs. Tabitha Bartholomew (Jo Martin) welcome the children with breakfast and Black history lessons I thought of the Freedom Schools back in 1964 that SNCC set up in Mississippi for the under educated Black adults and children. Like theirs, the lessons included a heavy emphasis upon facts that counter the prevailing racist view of that history. Mrs. Bartholomew asks, . “What do you all know about our ancestors?” she asks. A girl answers, “That we were slaves “That’s what they want you to know,” the teacher responds. “nothing of the richness of the cultures,” and she goes on to describe some of the great kings and queens of African history and folklore. Chief among these is Amina of Zaria, a mighty warrior princess, who ruled in the 16th century over what is present day Nigeria.

This climactic scene confirms what Simeon in Alex Wheatle had told his younger fellow prisoner, “If you don’t know your past, you won’t know your future.” This film centering on a child with this scene is a fitting way to end the series. I mentioned earlier that the Small Axe series is like a mosaic of racism in the London of the 60s, 70s, and 80s. Mangrove tells the story of adults of the West Indian rebelling against police brutality; Love Rock recalls the sanctuary that music and dancing provided the community, as well as the inspiration to resist racism; Red, White and Blue relates the story of resistance within the police department and the cost to the resister; Alex Wheatle is the story of a West Indian who became a successful writer despite his sad background; and Education demonstrated the effects of a system designed to remove Black children from the mainstream schools and force them into a bottom of the barrel life. Running through all of them is the old Liberation Theology teaching of conscientization, the process in which the oppressed become aware of their situation and of their power to do change it by banding together.

Taken together, these films are not just entertaining, but inspiring as well. Racism remains strong, in the UK and in America, but it can be resisted, even by those with little apparent power. As pointed out in one of my other films, Steve McQueen filmmaker allies himself with the Hebrew prophets whose passion for justice permeates both the Old and New Testaments. The writers of what has been called Israel’s Hymnal (also Israel’s Prayer Book) extol a God who insists that justice and compassion are central to worship. Certainly the abused Black children in this film are objects of divine concern. Kingsley may be fictional, but he serves as a stand-in for Mr. McQueen himself who on numerous occasions decried his early education which sought to consign him to the lowest dregs of British society. That he is now addressed as Sir Steve McQueen is living testimony to the hope that he instills in this last film of his series. The film is book-ended by the scene that began it. Alex is in the planetarium gazing upward in wonder at the spectacle of the Andromeda Galaxy and dreaming of becoming an astronaut, suggesting that he just might achieve that goal after all, thanks to the activists and his mother and sister who will nourish and support that dream.

Drawing on his own experience Steve McQueen tells the story of a Black boy victimized by the British racist educational system designed to weed out minority students and consign them to a life of failure.
Editor Rating ★★★★★5 out of 5
More Details