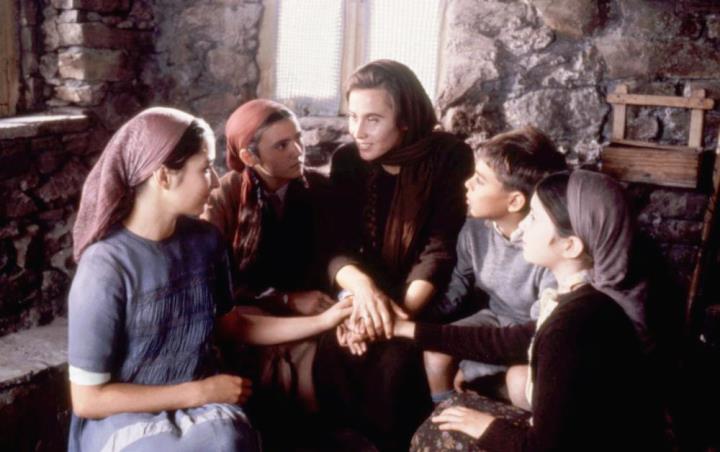 A Film for Mothers Day

This is a revised version of the film guide that I wrote for my book Films and Faith, published in 1999.

I went about as one who laments his mother,
bowed down and in mourning.


You shall not take vengeance or bear any grudge against the sons of your own people, but you shall love your neighbor as yourself: I am the Lord.

This true story of a Greek peasant mother and her son is a great one to watch for a celebration of Mother’s Day. Based on the best-selling book by journalist Nicholas Gage, it is guaranteed to evoke both a thrill and a tear as a vengeful son discovers the loving legacy left by the mother who gave her life for the welfare of the children of her village.

During the Greek Civil War in 1948 Communist insurgents occupied Lia, a small village in northern Greece. The guerillas were led by Spiro (Ronald Pickup), the former village school teacher who had tried to teach the virtues of Communism to the students. The occupiers promise freedom, but impose a harsh regimen on the peaceful villag­ers, forcing some of their youth, inclu­ding daughters, into military service. Eleni, married to an American-Greek husband who has promised to bring her and their four children to America soon, is caught up in the villagers’ resistance and executed.

Almost twenty years later Nick, now a reporter for the New York TIMES, returns to Greece to hunt for the man responsible for his mother’s death. His wife is upset that he wants to leave them, but Nick tells her that the 30-year time limit on prosecuting a war criminal is almost up, so he must go now. We also become concerned because he packs a gun amidst his belongings, this reminding us how much has changed since those pre-911 days. During his obsessive search he manages to locate former villagers and find more details of what happened.

Ironically, Eleni had hidden the guerilla leader Spiro (Ronald Pickup) from government soldiers looking to arrest him. for his Communist beliefs. Spiro was the cousin of a friend of Eleni’s, the tiny-bodied Katin (played by Oscar-winner Linda Hunt). Both women resist the occupying forces—first Eleni when her oldest daughter is conscripted into the army and the mother takes drastic measures to cripple her. Then Katin, who, when the Katis (Oliver Cotton), the village Commissar tries to entice the mothers to give up their children to be shipped for re-education in Albania and Czechoslovakia, steps forward embracing her two children and defiantly refusing the offer. Even though she is Spiro’s cousin, the commissar orders her to be shot. Eleni plots to sneak all the children out one night, but is separated from them the day before when ordered to join a work detail that will take her out of the village. At her urging, other villagers go ahead with the plan, and the angry commissar orders her to be shot along with others involved. Her two last words are of defiance and love—and will send a chill and a thrill down your spine! Likewise, so will what Nicolas does when he at last has the killer in his sight—fittingly, it is the sudden appearance of a child that influences his decision.

Few films show the lengths at which a mother will go to protect her children as this film does. Kate Nelligan is magnificent as the uneducated yet wise mother willing to sacrifice her. She manages to portray a woman of strength and character without making her into a sugary celluloid saint. And her maternal love is not restricted to her own—when a mule loaded down with clothing and food supplies, sent by her husband in America, Eleni does not retreat to her house to unpack the goodies. She opens the trunk and gives away as many garments and food parcels as she keeps. And when she determines to help her children escape, she includes the other children in her plan. This might have led to her undoing, for at her kangaroo court trial presided over by the commissar, one of the villagers gives in to testify against her. Linda Hunt also portrays a mother dedicated to her children, but it is Eleni who leaves behind a legacy that will touch her son and perhaps provide the balm that will heal his grieving spirit.

John Malkovich is convincing as her grown son trying to deal with his long suppressed grief and growing desire to find the man who ordered her execution. The screen play greatly condenses the book, but the dramatic essence of the story is captured. Listen closely to Nick’s words in the voice over at the conclusion of the film. His spiritual journey is a long, uphill one, but a fully inspiring one. When I preached a Mother’s Day sermon based on this film some years back, several people admitted to a tear in their eye, Eleni’s story is so moving.

It is difficult to understand why this powerful film was not marketed better so that it could have attracted the audience it so richly deserves. It fell into obscurity when DVD replaced VHS movies, and no one issued it in the new format. Now that it is available free on YouTube and for rent on Amazon Prime, you can see for yourself what a marvelous film it is. What a tribute, minus the mushy sentiments of the worst of those commercial cards offered for this day, to the love and fortitude of mothers.

True story of a NY TIMES journalist who returns to Greece to find the man who 30 years ago had executed his mother during Greek Civil War.
Editor Rating ★★★★★5 out of 5
More Details