Skip to content
Rated R. Our ratings: V -7; L -6; S/N -2.  Running time: 1 hour 49 min.
O LORD, you will hear the desire of the meek;
you will strengthen their heart, you will incline your ear
to do justice for the orphan and the oppressed,
so that those from earth may strike terror no more.
Psalm 10:17-18
… learn to do good;
seek justice,
rescue the oppressed,
defend the orphan,
plead for the widow.
Isaiah 1:17
The Spirit of the Lord is upon me,
because he has anointed me
to bring good news to the poor.
He has sent me to proclaim release to the captives
and recovery of sight to the blind,
to let the oppressed go free…
Luke 4.18: 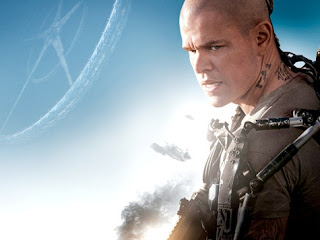 Max must reach Elysium if he is to save his life and that
of others as well.
(c) 2013 TriStar Pictures

I remember from my boyhood the definition of science fiction as the extrapolation of present trends or developments into the future. (I think this was from either influential editor John W. Campbell or an author such as Robert Heinlein or Isaac Asimov.) South Africa-born director/writer Neill Blomkamp obviously understands this, as evidenced by his second film in this genre. Set in a Los Angeles that in 2154 looks more like a Third World metropolis with its overcrowdedness, clogged streets, and befouled air, this dystopia is the  result of today’s trend of the 1 % becoming more and more richer—reportedly they now control 32% of the wealth—at the expense of the middle class and poor. Earth has become so over-populated, diseased, polluted, and overcome by crime that those with the means have retreated into a huge donut-like satellite named after the Greek Elysian Fields, where all is fair and bright. A semblance of order is enforced on Earth by robot cops programmed to deal harshly with anyone on Earth who even looks like he/she might resist the strict laws imposed from above.

Max (Matt Damon) had been raised at a Catholic orphanage where a nun had often assured him that he was special, created for a worthy task. This inspires him to look up toward Elysium and vow to reach it one day. That must seem long ago to him now, working at a factory run by Armadyne, a defense company that planned and built Elysium and all of the robots serving it and enforcing its laws. At this sweatshop-like factory he is brow beaten by a harsh foreman. Once a car thief, Max is trying to put his criminal past behind him, but then comes the day when he is exposed to a high dose of radiation on the job.

Given just five days to live, Max contacts old crime associate Spider (Wagner Moura), who is similar to the coyotes of today’s Mexico in that he sends off ships loaded with desperate people trying to reach Elysium where every lavish home is equipped with a healing bay. Equipped with a MRI-like scanner, a bay can quickly cure virtually any ailment known to mankind. But only citizens of Elysium have access to it: not one of Earth’s hospitals is so equipped. In a poignant scene we see Defense Secretary Delacourt (Jodie Foster) coldly order three approaching ships filled with illegal immigrants (who paid dearly for their berths) to be shot down. Apparently word of the fate of those trying to escape their wretchedness has not reached the masses of others clamoring to leave Earth.

Max and Spider have a plan—to equip the former with a cyborg frame that will greatly enhance his strength, and to kidnap Armadyne’s CEO John Carlyle (William Fichtner).  Carlyle has a chip embedded in his brain that has all the information about Elysium and the program that controls the robot police. Max is to link to the kidnapped CEO’s brain and download all the information into his own modified brain; travel to Elysium; and overcome its defenses with Carlyle’s computerized information. Along the way Max meets Frey (Alice Braga), a nurse whom he had known as a child back at the orphanage. She has a daughter dying of leukemia, a disease easily cured by a few minutes in a healing bay, so there are now three reasons to accomplish his mission—for himself, for the mother and her girl, and for the oppressed of the Earth.

Matters of course do not go smoothly, one of his chief obstacles being the vicious mercenary Kruger (Sharlto Cople), employed by the Defense Secretary as an undercover agent on Earth to ferret out any opposition to her plans. There is an overly violent series of fights and battles before any kind of a victory can emerge for the poor. Indeed, the ending is very simplistic; so it is best not to think too much about this, except to rejoice that the good guys win.

While reflecting upon the film I not only thought of the director’s excellent District 9, also a dystopian film, set in the director’s own country South Africa, still suffering from the effects of apartheid, but also of Tsotsi, the 2005 film directed by Gavin Hood. Mr. Hood, also born in South Africa, shows that even though apartheid has legally been destroyed, its effects still infuse a society terribly divided between the wealth and the poor. His film chronicles six days in the life of a gang leader named Tsotsi who accidentally kidnaps a baby during his car jacking of a wealthy white couple’s RV. Tsotsi and his friends often sleep in drainage pipes and such places, while the whites live in splendor behind their high walls and gates. Tsotsi can touch the walls that separated him from wealth, whereas Max must look up to see the gated satellite, and yet it is just 19 minutes away by space shuttle.

Elysium thus resonates with issues currently being debated—the growing separation between the rich and the less well off; the desperate desire of the poor to cross illegally into America and the attempts of defenders of the status quo to keep them out; the lack of access to health care that plagues so many; and more. This is a film well worth seeing and discussing, though the convener might have to reign in the passions of some members. It is refreshing to find at last a summer blockbuster that is not all CGI-enhanced sound and fury, but has a little more substance to it, even a recognition that the church has a contribution to make to the lives of  “the least of these.” However, I would have loved the film more if there had been shown a church or its leaders working with the poor. Indeed, wouldn’t have been good if the nun had been given a name and more screen time, interacting with Max as he grew older. Wim Wenders made the church an important factor in his post 9/11 film Land of Plenty: his young heroine works in an inner city church that feeds and houses street people. Surely there will be such churches still around 140 years from now.

1. What do you think of director/writer Neill Blomkamp’s projection of current trends into the future? How does science fiction often serve a prophet role? Along with 1984, Solyent Green, and Farenheit 451, what other such films can you recall?
2. How must the loving nun have affected Max? How important is her admonition, “Never forget where you come from and never forget how beautiful it is here”? Given what has happened to Earth and its society, what does this reveal about her?
3. In this film cops are robots programmed to deal harshly with dissenters and disturbers of the peace: how do some present day police, even though they are humans, act like robots in their dealings with members of the underclass? Check out the last scenes in the film Fruitvale Station.
3. How is the name of the space station fitting, based as it is on Greek mythology? For those trapped on the polluted Earth, how does the old phrase “pie in the sky” take on new meaning?
4. The film, unlike most sci-fi ones, does acknowledge the church and its ministry. How might the church be functioning 140 years from now?
5. What do you think of the film’s way of overcoming oppression? How is this typical of most films? How might the Christ of the above Lukan passage have resisted—or Gandhi or Martin Luther King, Jr.? Now wouldn’t that make for an interesting sci-fi film? (Eric Frank Russell provided the perfect text in his 1951 satirical story published in Astounding Science Fiction, “And The There Were None,” which later became the third part of his novel The Great Explosion. No fights or battles or chases, just a people resisting intruders in their own non-violent way. I liked the story so much that I have saved the magazine over the years. For a delightful read you can find the entire text at: http://www.abelard.org/e-f-russell.php.) 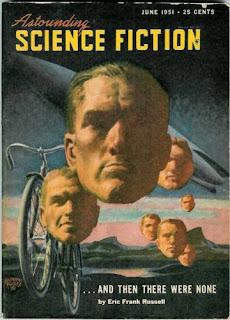 6. Unashamed commercial: my new book Blessed Are the Filmmakers, due out in the fall of 2013, has guides for numerous films that depict non-violent resistance—Amazing Grace & Chuck; The Buttercream Gang; Freedom Riders; Gandhi; Jesus: the Miniseries; King; The Long Walk Home; and The War, to name but a few of the 40 films (specific scenes of non-violence are identified). The group might watch several of these scenes at the conclusion of the discussion of Elysium..