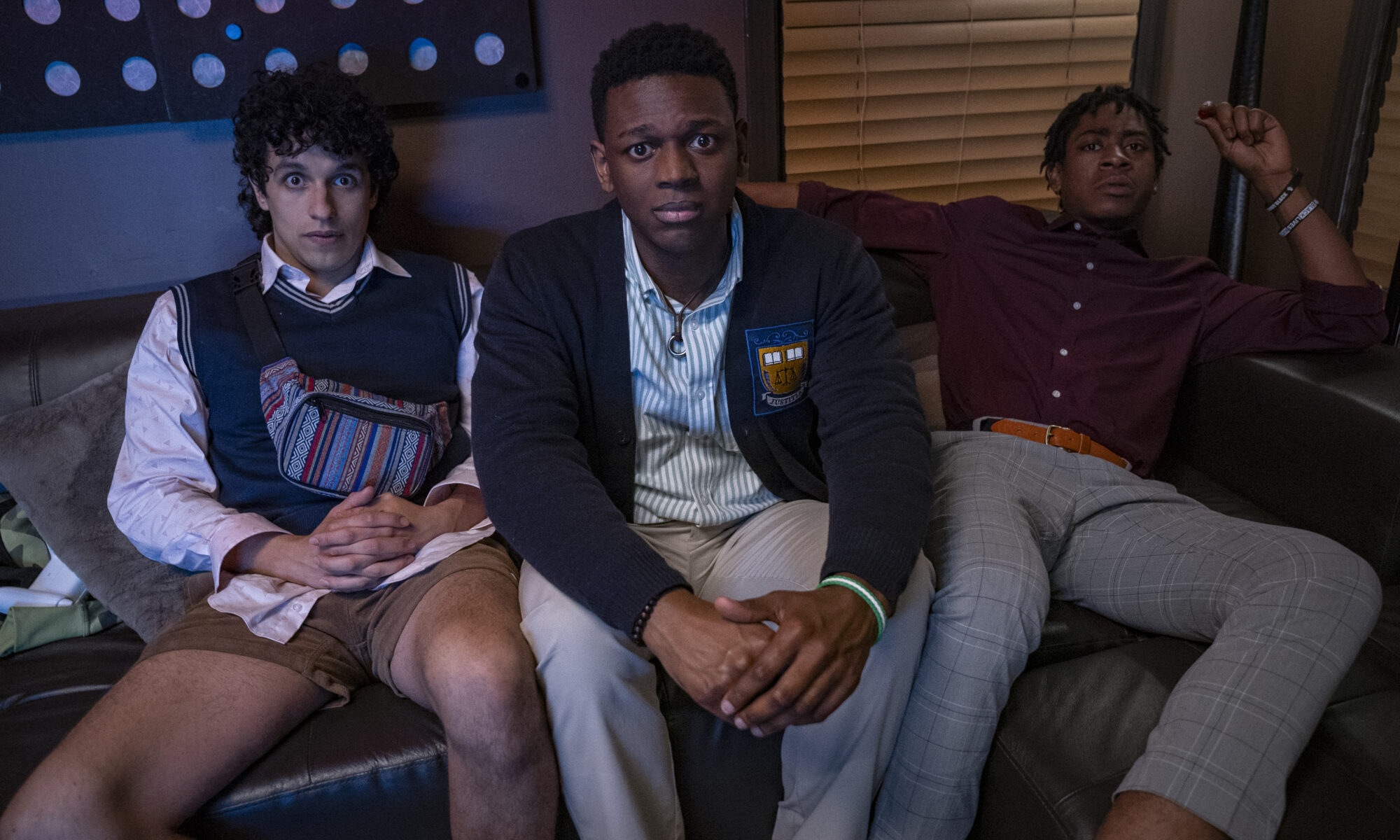 I am distraught by the noise of the enemy,
because of the clamor of the wicked.
For they bring trouble upon me,
and in anger they bear a grudge against me.

While watching director Carey Williams‘ college-based film I often felt the urge to call out, “That’s stupid! Don’t do that!” Just like during those endless series of teen horror films when the kids make a bad decision that too often leads to death. Script writer K.D. Dávila gives a new twist to this familiar trope and adds a twist or two, informed by #Black Lives Matter. At first glance, this film might look like Animal House Meets Get Out, but it is far more serious than the former, and a bit more realistic than the latter, even though it also is somewhat of a farce, a very delightful one at that.

Sean (R.J. Cyler) and Kunle (Donald Elise Watkins) are two Black seniors at the mostly white Buchanan University, with a grand plan for a historic night of party-hopping (aptly named “The Legendary Tour”) before they graduate. One wall of the Black Students’ Center is decorated with plaques memorializing those who were Black “Firsts”—”First Black to be on Student Council,” “First Black to Be Class President,” First and so on.” They envision theirs to say that they are the first Blacks to make every campus party that the Greeks sponsor during the big party night.

At the beginning the two are in a class on hate-speech in which their white British teacher discusses the N-word. She not only repeats it out loud but projects a slide with the slur printed in large capital letters. The students are so stunned by this that none replies to her request for a reaction. Of course, she singles out the two Blacks, not thinking how this might make them feel. We do not hear their reaction, but we learn something more of the two when they discuss the incident outside, as well as are introduced to a third character who in the film represents most white liberals (for the film’s makers). She is Maddy (Sabrina Carpenter), who approach the two and expresses her concern and suggests that she can bring up their “cause” at the student council, of which she is a member.

What we learn about Kunle is that he is the strait-laced member of the duo raised in a bubble of comfort by African immigrant parents, both of whom have successful medical careers. Compared to Sean, who grew up in the ghetto, Kunle has been sheltered from the worst effects of America’s “Original Sin.” So much so that at one point during their many conversations Sean calls his friend an “Oreo,” a Black person who is Black on the outside and white on the inside. Kunle is an A student, whereas Sean scrapes by, preferring the social life of the campus to its academics. Kunle, if his current experiment and thesis are a success, hopes to be admitted to the PhD program of Harvard, whereas Sean has no plans for his future.

But, as we see the elaborate diagram and schedule on the wall of their room, Sean has an elaborate plan for them to barely catch all of the parties on the big night. He is concerned that they keep their tight schedule, whereas, when they set out on their round of partying, Kunle is worried over whether or not he closed and locked the door of the cubicle into which he has placed the fungi he is experimenting on. This must be kept cool or it will spoil the results.

Sean’s carefully laid plan starts to go awry when they discover a blond white girl on the floor of their house. She is mostly unconscious, rousing just enough to vomit on their floor. (Part of the infectious humor of this otherwise serious film comes later when Kunle says that her puking spoiled their carpet and Sean corrects him by pointing out the floor is hardwood, not carpeted) Kunle’s first reaction is to call 911—after all the girl is unconscious. The three of them debate this—three because their housemate is a Latino named Carlos (Sebastian Chacon). A gamer, he had been so absorbed with a computer game that he had not heard her enter their house.

Kunle argues for the sensible action, as every American middle-class person would. Sean’s perspective is that of a ghetto dweller who fears all white authority figures, whether medics or cops. He is certain that all they’re going to see is “three brown guys hanging over a white girl.” The sure-fire outcome, he argues will not be good for any of them. So, they at last agree to load her in their van and transport her to a hospital Emergency Room, which they will promptly leave.

Of course, nothing goes as they intend. On the way they decide to leave her at a frat house for others (whites) to discover, but this goes awry, with some angry Greeks hurling missiles at their retreating van, knocking out the right tail light. Now Sean is really upset and worried. What if a cop should spot it and pull them over. More back and forth, during which Sean reveals that his fear is not just paranoia, but grounded in reality—a member of his family had been pulled over and shot and killed by nervous white officers. Sean decides that they stop at his uncle’s house so they can borrow his car. More humor when Kunle waits in the room where the uncle and a house full of ghetto toughs have been playing cards. While the uncle and friend are arguing in an adjacent room, Kunle feels as uncomfortable with these dudes as if he had dropped by a KKK meeting. The humor comes when the gang, learning the boys have a drunk white girl outside in the van, all rush out of the house as if the vice squad were raiding it. The uncle refuses their request, wanting no part of being involved in an affair concerning a white girl. And so, our trio returns to the van. Tension mounts, because during this time Carlos has given the girl a drink, not of the orange soda, but mistakenly, of the lemon bottle containing alcohol.

Meanwhile, back at one of the parties, Maddy becomes concerned about her younger sister Emma whom she cannot find. This is the girl in the van! She learns of her whereabouts through the sister’s cellphone tracking system, and so sets off the find her with her friend Alice (Madison Thompson and Emma’s boyfriend Rafael (Diego Abraham). Their modes of transportation are a bicycle and electric scooter. They keep getting closer, finally catching up with the van on a country by-lane, the boys deciding to take a roundabout way to the hospital when they had spotted ahead a police checkpoint. Emma, or “Goldilocks” as the three boys had dubbed her, has awakened just enough to see that she was in the company of strangers—and they were all people of cover. The van had sopped by a wood, so she breaks away, disappearing amongst the darkened bushes and trees. Thus, you can imagine what Maddy thinks when they arrive at the scene. There’s more to follow, including a police chase and stand-off, so there’s plenty of tension and fear before our worries over the survival of Emma and her transporters are resolved.

This film is both entertaining and insightful about the nature of American society and the effects of its “Original Sin.” I am sorry that it is rated R (mainly for language) because it is otherwise a perfect film for a youth group to explore racism and fear. We see the journey toward awareness of Kunle, from initial naivety about the society from which his parents had been able to shield him, to an awareness that would one day have to contend with its racism that none of his impressive achievements or nobility of character mattered because of the color of his skin. This is a film that will often bring you to laughter, but also to an awareness of the reality of our situation of entrenched racism. It is good to be able to laugh as we watch Kunle’s journey from naivety to full wakefulness. Neither he nor his distraught companions share the Psalmist’s faith in God, but they do experience “he “fear and trembling” and would gladly “fly away” if they could—but to where?

The film’s conclusion especially should raise questions, especially what Kunle does when Maddy knocks on the door, intending to offer the apology that she has written out on the sheet of paper she holds in her hand. And what does the last shot of Kunle, a close up of his face, signify?

Amazon Studios will release EMERGENCY in theaters this Friday and on Prime Video May 27, 2022.

When college housemates find a white girl unconscious on the floor of their house, their fears, expressed by "three brown guys hanging over a white girl " leads to desperate measures, some of them ver
Editor Rating ★★★★★5 out of 5
More Details