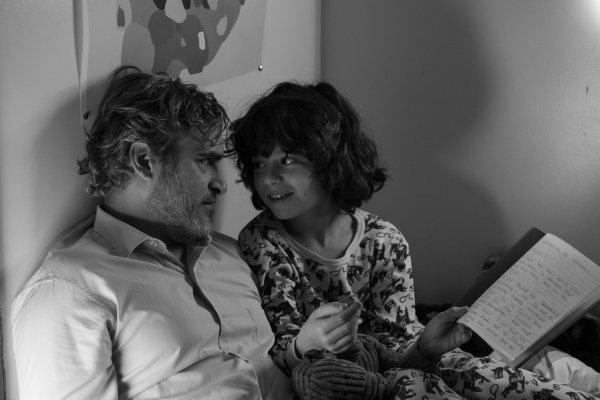 Do not be fainthearted or fearful
at the rumors heard in the land—
one year one rumor comes,
the next year another,
rumors of violence in the land
and of ruler against ruler.


(Note: spoiler in the last 2 paragraphs.)

Director/Co-writer Michael Pearce has us looking skyward in the first half of this unsettling film about a stressed-out war veteran and his two young sons on the run. A bright meteor, or something more ominous, streaks across the night sky. As soon as it lands a swarm of insects attack it and then invade the bodies of unsuspecting humans. A man stealthily wakes up and sneaks two boys out of their house and drives off into the night. At first, he tells them that this is to be a fun trip, but at last declares, “This ain’t a road trip, it’s a rescue mission.” He is convinced that aliens are about to take over the earth, so he must protect his boys.

The man is Malik Kahn (Riz Ahmed), a Marine Corps veteran awarded a Bronze Star, and the boys are his sons Jay (Lucian-River Chauhan) and Bobby (Aditya Geddada). Estranged from their mother and suffering from his war experience, he has been studying these strange sights, and fears that they are non-terrestrial parasites come to invade our bodies and take control. On the road, their car often topping 100 mph, the three endure various encounters with those whom they meet, some of them very deadly.

Thus far we have been led to see things through Kahn’s frenzied eyes, but midway in the film Octavia Spencer’s character Hattie Hayes enters the story that the viewpoint shifts and we question Kahn’s story that he’s told his kids about being an agent on a secret mission for the past two years. Matters reach a dramatic, potentially tragic climax out in a desert stand-off, with the terrified boys helplessly watching.

Whether or not you guessed what the reality of the father’s situation, the film will hold your attention. There is a disappointing shoot-out segment when it seems that the filmmaker’s politics get in the way—one of the bad guys looks like Steve Bannon—and some might also resent being misled by the opening sequence. Thus, the main reason for watching this Amazon movie is Riz Ahmed’s intense performance as a beleaguered father believing he is protecting his cherished sons. And the two young actors playing his boys are way beyond the average of child actors as well. I enjoyed Ahmed as the going deaf musician in The Sound of Metal, and did so as well, despite the film’s shortcomings, in this one too. The tension in the last sequence is so great that you might want to sit through the long end credits just to let you heart slow down.

Malik Kahn is like those that the prophet Jeremiah addressed when the city of Babylon was about to fall to invaders. The captive Jews were full of fear, engendered by rumors—in Kahn’s case delusions. They needed the calm reassurance of the prophet that they were not forgotten or doomed, but that their God was fighting on their side. In Kahn’s case that reassurance comes from his compassionate parole officer Hattie Hayes, pulling for him and watching during the stand-off. We don’t know what the future holds for him, but we can believe that she will be there to help in the healing process.

Available on Prime Video. This review will be in the November issue of VP along with a set of questions for reflection and/or discussion. If you have found reviews on this site helpful, please consider purchasing a subscription or individual issue in The Store.

A stressed war veteran kidnaps his 2 young sons from his ex-wife & flees with them to escape invading aliens from outer space.
Editor Rating ★★★★★4 out of 5
More Details