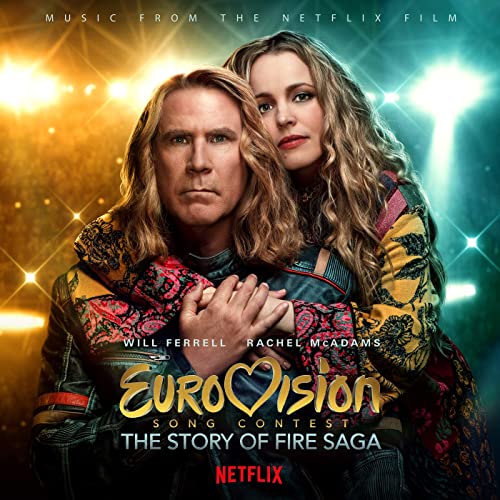 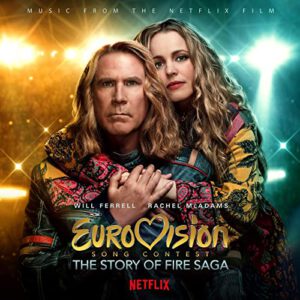 David Dobkin’s new Netflix comedy about a pair of outsiders offers a respite from serious concerns for those wanting escape. Will Ferrell plays Lars Erickssong and Rachel McAdams is his bandmate Sigrit Ericksdottir. Their dream, since childhood, is to sing together at the hugely popular Eurovision Song Contest. Also, they would consummate their mutual attraction except for the fact that could be half-brother/sister. Lar’s widower fisherman father Erick (Pierce Brosnan) has had affairs with so many women in the fishing village that he has lost count of the number of children he has sired.

Lars still lives at home, but his father disdains his son’s dream of ever appearing at Eurovision. He has heard too many of the bad songs that Lars has written for their pick-up band which they call “Fire Saga.” Lars and Sigrit are disappointed not to make the cut for the Iceland contenders for the festival, but then the yacht on which all the winners are partying blows up, leaving them by default as Iceland’s representatives. Of course, no one expects anything of them, including the officials of Iceland’s board, one of whom for sinister reasons does not want his nation to win.

At the festival the sappy pair somehow draw the attention of two top contenders, Russia’s flashy star singer Alexander Lemtov (Dan Stevens) and the sultry Greek diva Mita (Melissanthi Mahut). There’s a lot of silly antics as they separate into pairs, plus lots of sampling of the contestants’ music—by the four and a stage full of other contenders as well. The music turns out to be of more interest than the character’s lugubrious antics.

The chief impression this silly comedy leaves is the value of persistence. In this category Sigrit proves more steadfast in that Lars after a spectacular failure on stage gives up whereas his partner stays on stage to face the audience despite their failure.  It is she who is most like the knocker on the door at midnight in the Biblical parable. Will her partner come to his senses, and will he and Sigrit be able truly become a couple and will Lars win the respect of his father and fellow villagers? Answering all this is akin to answering “Will the sun come up tomorrow?” No deathless contribution to romantic comedy this, but one could do worse. At least the many song and dance numbers are enjoyable, and some of the attempts at humor score.

In Iceland a ne-er do well son persists with his girlfriend in trying out for Eurovision, despite his father & his village's disapproval.
Editor Rating ★★★★★3 out of 5
More Details