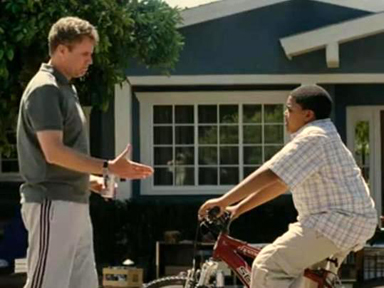 I call heaven and earth to witness against you today
that I have set before you life and death, blessings
and curses. Choose life so that you and your descend-
ants may live, loving the Lord your God, obeying him,
and holding fast to him; for that means life to you
and length of days, so that you may live in the land t
hat the Lord swore to give to your ancestors, to
Abraham, to Isaac, and to Jacob.
Deuteronomy 30:19-20

Will Farrell stars in what we might regard as writer/director Dan Rush’s ultimate yard sale movie. Al though it is based on Raymond Carver’s short story “Why Don’t You Dance,” Ferrell’s Nick Halsey has little reason to dance, the film beginning on a very bad day for him. His boss fires him because of a year-long string of problems caused by his excessive drinking, and when he arrives at his home, he sees his yard littered with his possessions. Clothing, sports and exercise equipment, books, record albums, etc.

Not only does Nick lose his job, he cannot get into the house because his wife has changed the locks and moved away, leaving a note telling that she is seeking a divorce.

Nick’s life has tumbled in because of a long series of bad decisions he has made. One of them, made just a few hours earlier—his sticking his Swiss Army knife into the rear tire of his boss’s car and leaving it there when he could not extract it—leads to his losing the company car that he would have been allowed to keep until the end of the month.

However, instead of hiking to a motel, the distraught man walks to a convenience store, buys a six-pack, and settles into his recliner chair for the night. The next day a chubby African American boy is riding his bike in small circles in the street while surveying the unusual sight of Nick and his crowded front lawn. The boy is Kenny (Christopher Jordan Wallace), who rides his bike while his mother provides home care for someone down the street. The two begin a wary relationship when Nick hires the boy to watch his stuff while he goes to buy them some food (and himself more beer). The police come to evict him, but he calls in Detective Frank Garcia (Michael Peña), who turns out to be his AA sponsor. Frank agrees to give Nick some time to get his possessions in order for a yard sale, this being the only legal way he can live on his lawn for another week.

Kenny helps Nick in the task of organizing and pricing, the two bonding more closely as the days pass by. It turns out that Kenny also has issues, mainly the frequent taunts from classmates who poke fun at his weight. Nick tells him he must fight back. The boy says little, but apparently takes in every thing—plus he proves to be a shrewd bargainer with Nick concerning wages. Kenny also proves quite a friend, loaning his bicycle so that Nick can run errands. The latter even visits an old classmate (played by Laura Dern) who had written a kind note in his high school yearbook.

The new neighbor moving in across the street, Samantha (Rebecca Hall), seems to be the only one in the neighborhood concerned for him (how different from all the neighborhoods that I have lived in!). She has her own problem with her absent husband, a professional athlete, but her good heart reaches out to Nick with food and conversation. Thus we think the plot might go in one direction, but to the credit of writer Dan Rush it does not. Everything Must Go is an engaging, insightful comedy drama about loss and redemption. Were it not for the scene that leads to Nick’s being able to obtain electricity from his raunchy next-door neighbors, this might have been a good family film. As it is, young adults can have a good time viewing and discussing it, especially with regard to the double meaning of the film’s title and its relationship to Jesus’ words about possessions.

1. How can we see this film as Nick’s story of bad decisions, a counter-parable to Moses’ challenge to Israel? What were those decisions and their results: at work; when he exits the building; and, apparently at home, in relationships with his wife?

2. Do you think that Nick’s wife has made the right choice in leaving him? What has she probably put up with during the years of their marriage? How is she now forcing Nick to confront his demons, rather than being an enabler? What has been your experience with alcoholics, whether in your family or in those that you know?

3. What apparently has been Nick’s relationship to Detective Frank Garcia? How does the policeman show that he is an agent of grace?

4. What did you make of Kenny when you first saw him? How is he an unlikely person for Nick to link up with? How is he similar to Nick in a way? What do you think of Nick’s advice to him to “fight back” ?

5. How is Nick’s decision to stay put on his lawn his own version of “fighting back” ? Do you think he had any plan at first? How did circumstances lead him toward a plan? How do we see that he still is not dealing with his basic problem (that is, what does he continue to buy and drink)?

6. What is new neighbor Samantha’s situation? How does she both give and receive grace? What do you think of the way in which the relationship between her and Nick worked out?

7. Why do you think Nick decided to look up Delilah? How are her parting words something he needs to hear? What similar words of support or encouragement have meant much to you over the years? Again, as with Samantha, how might the plot of the usual Hollywood film have moved from this point?

8. How does the yard sale deepen the relationship between Kenny and Nick? How do we see him discovering latent talents? How is the yard sale symbolic of Nick’s letting go? Maybe even of old habits, as well as things? What meanings do you see now in the film’s title? (Think of the title in connection with the tsory of Jesus and the rich young man—Matt. 19:16-22)