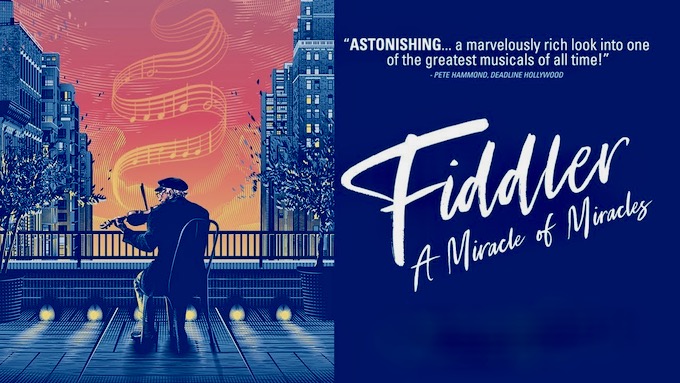 Hear this, all you peoples;
give ear, all inhabitants of the world,
both low and high,
rich and poor together.
My mouth shall speak wisdom;
the meditation of my heart shall be understanding.
I will incline my ear to a proverb;
I will solve my riddle to the music of the harp.


I have seen the wicked oppressing, and towering like a cedar of Lebanon.

Fiddler on the Roof is one of my favorite musicals because it deals so well with the theme of oppression, so I was looking forward to seeing Max Lewkowicz’s documentary about its genesis and development. The documentary was even better than I had hoped, with interviews of the theatrical and cinema movers and shakers who conceived it, and also with the various stars who played the characters. It is filled not only with clips from several stage presentations and the film, but even one from Tevya, a 1939 Yiddish film, also based on the writings of Sholem Aleichem (1859-1916).

Set in 1905 Czarist Russia, Aleichem’s story is centered on the impoverished Jewish milkman Tevye and his five daughters, all at or near marrying age. Although the story took place almost 115 years ago, and the musical opened on Broadway 55 years ago, this wonderful documentary effectively shows its relevancy today!

New interviews–with Stephen Sondheim, Lin-Manuel Miranda, Fran Lebowitz, Calvin Trillin, and Alisa Solomon—are intermixed with archival clips of the original creators (who at first questioned if a musical could be extracted from Aleichem’s stories), composer Jerry Bock, lyricist Sheldon Harnick, and librettist Joseph Stein. The director of the Oscar-winning 1971 film, Norman Jewison evokes laughter when he relates how he apologized to the studio because he was not a Jew, despite the sound of his last name.

This portrait of the musical includes some warts: the first Tevya, played by Zero Mostel would barely speak during rehearsals to choreographer Jerome Robbins because he had been blacklisted during the McCarthy era and Robbins had cooperated with the Congressional investigators by naming names, forced to do so when investigators threatened to “out him” as a homosexual, at that time a career-ending exposure.

We learn that the originators wanted to make clear the essence of the story, and so “Tradition” became the opening song, and as the family’s story unfolds, we see how it is eroded by Tevya’s daughters’ rejections of matchmaker’s Yente’s choice of a husband for a suitor of their own choice. Yet, in the face of the intermittent oppression by Czarist society, it was tradition that held the Jewish community together. From a modern standpoint the nascent feminism of the five daughters is commendable, but from that of their community their rebellion can end only in the diminution of Jews as a people.

The universality of the story is highlighted in several ways:

-Puerto Rican singer Lin-Manuel Miranda surprised his Dominican wife Vanessa at their 2010 wedding by singing, not a Hispanic song, but “To Life.” Miranda explains, “There was no other song in the canon that was about the relationship between a father-in-law and his new son,”

– Sheldon Harnick, who wrote the lyrics for Fiddler on the Roof, recalls attending a Tokyo performance and being asked: “Do they understand it in America? It’s so Japanese.” The show has also been produced in other Asian nations, as well as by an all-black cast in a NYC high school!

-In the section exploring the theme of female empowerment and the role of matchmaker Yente, the film makers go into the history of matchmaking and relate that too often matchmakers sold Jewish young women into white slavery, a practice current in South America at the time the musical was being put together.

-filmmaker Gurinder Chadha speaks about his own British-Indian sports movie Bend It Like Beckham (reviewed in the May 2003 VP) featuring a young female football player who goes up against tradition and her Sikh father to fulfill her dream.

In case you do not already know, the film reveals that the title was suggested by paintings by Russian/Jewish painter Marc Chagall (one of my favorite 20th Century artists), who depicted fiddlers in many of his paintings, the best known being “Green Violinist” (1923-34). This fiddler seems to be hovering in the air over two cabins. There is an earlier one, “The Fiddler (1912-13),” in which the man’s right foot seems to be resting on the roof of a cabin; and in “La Mort” (1908) a fiddler sits upon the chimney of a cabin while a man and a woman prepare the grave of a dead man surrounded by ceremonial candles.

The film includes clips of the pogrom and of Tevya’s family and their neighbors forced to leave their village, and then cuts to the frightful images of the Neo-Nazi torch light parade in Charlottesville in 2017, forcefully driving home how relevant the play, set so long ago in in Russia, still is. We may long for the era of harmony, so beautifully described by Isaiah as a time when children and poisonous snakes, predators and the hunted play and eat side by side, but that day still seems a long way off. Harmony between races and other differing groups still seems “as precarious as a fiddler on the roof.” This play and film are still needed to instill in our souls the pledge inspired by the Holocaust “Never again!” After you see this delightful documentary, you will appreciate and cherish the musical even more.

Ironical note. Variety’s review of this documentary is a lukewarm one. 55 years ago, its reviewer declared there were “no memorable songs” in the play. Also, the then famous theater critic Walter Kerr did not think much of the 1964 debut of the play. Fortunately, other critics and the public disagreed, the play winning nine Tony Awards. There have been five Broadway revivals, and currently the Yiddish version, directed by Joel Grey, is running in New York.

I have to add, since just viewing the film’s “Official Site” and trailer, that the documentary’s opening is perfect. From a high-up vantage point we look down upon the towering buildings and busy traffic of Manhattan, accompanied by indistinct violin music. Then the camera moves in on a single apartment building as the familiar fiddle overture to the film begins. Dissolve to a medium shot of the back of an elderly man playing the tune; then a close up of his face and an extreme close up of his hands fingering the bow and strings. The fiddler sitting on the roof of the building is Sheldon Harnick, lyricist of the play.

The making of Fiddler on the Roof, from a Yiddish story to a Bdwy musical to a film, is told through interviews with its originators & cast, photos, & archival footage.
Editor Rating ★★★★★5 out of 5
More Details