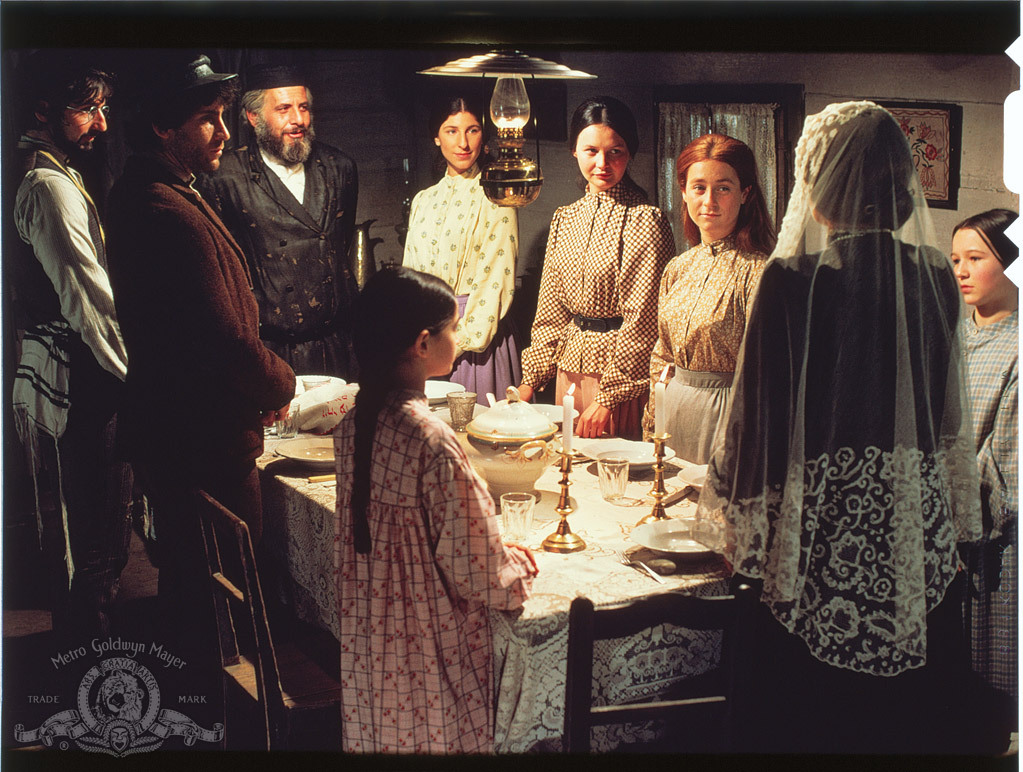 How long must your servant wait?
When will you punish my persecutors?
The arrogant dig pits to trap me,
contrary to your law.

All your commands are trustworthy;
help me, for I am being persecuted without cause.
They almost wiped me from the earth,
but I have not forsaken your precepts.
In your unfailing love preserve my life,
that I may obey the statutes of your mouth.

When this stirring film came out in late 1971, I was thrilled, having listened to the Broadway cast album many times. Like most Americans, there was little opportunity for me to catch the play, even when it went on tour. Set in 1905 Czarist Russia, the story of Tevya, his wife Golde, and their five daughters, plucked at the heartstrings of every person in that theater where I sat enthralled with the rest of the audience. I loved the way that the sassy Tevye (Topol) was like the Biblical Abraham, frequently talking with God (and to us) as if they were neighbors, though God obviously lived in the bigger house. Tevye was respectful, but not piously subservient. And though we frequently laugh and celebrate with the characters in the film, we also weep due to the ultimate tragedy, both Tevye’s personal one and that of the Jewish villagers forced by cruel prejudice into exile at the end of the film.

Many times through the years I have used Tevye’s plea to God, “If I Were a Rich Man” in sermons and discussions about God and wealth. Judging by what Tevye says he would do with his wealth, it would indeed “spoil some vast eternal plan” were he a wealthy man. He apparently would be like the rich fool like in Jesus’ parable in the Gospel of Luke, hoarding or spending it on himself, rather than helping others with his wealth. Tevye the poor man possesses noble traits of perseverance and dignity. Tevye the rich man would be an overbearing boor.

Of course, the film’s central theme is tradition, seen for its good as well as its bad aspects, “Tradition” being the first song we hear as the story unfolds. Tradition binds the oppressed Jews together as the larger society excludes and insults them. And yet because of its patriarchal nature, tradition holds back women. Tevye loves his daughters, so he slowly and reluctantly yields to their pleas, first to Tzeitel (Rosalind Harris) who loves her childhood friend the tailor Motel Kamzoil (Leonard Frey) rather than the wealthy butcher Lazar whom matchmaker Yente (Molly Picon) has suggested; and then to Hodel (Michele Marsh), who has fallen in love with her tutor Perchik (Paul Michael Glaser), the student from Kiev with radical social ideas. The latter publicly breaks tradition by crossing the line dividing the sexes—he goes over and dances with Hodel.

However, when Tevye’s middle daughter, the bookish Chava, falls in love with the Gentile Fyedka (Ray Lovelock), Tevye has reached the limit of his bending or loosening of tradition. His firm “No!” is irrevocable, because such intermarriage would lead to the end of the Jewish people. Thus, the first of the film’s two tragedies is set in motion, the second being the expulsion of all the Jews from Anatevka, the latter foreshadowed by the attack of out of town ruffians who ride in and smash things during Tzeitel and Motel’s wedding. In a bow to the tolerance of local Gentiles, their men join in the vigorous dance that accompanies the song “To Life.” Unfortunately because the so-called “demonstration” is officially sanctioned, none of the Gentile guests, including the local Constable ((Louis Zorich) sympathetic to Tevya, can intervene to stop the destruction.

The Jews of Anatevka truly live on shaky ground, hence the play’s metaphorical title, inspired by several of the paintings of a Russian fiddler by Marc Chagall. As Tevye says at one point, his people are in “a precarious position, like a fiddler on the roof.” Norman Jewison incorporates the fiddler in several scenes throughout the film, starting at the very beginning. At the conclusion, as the long line of Jews trudge out of their village, one of the last to leave is the fiddler. (The documentary Fiddler: Miracle of Miracles, reviewed elsewhere in this issue, begins with a shot of a tall Manhattan apartment, atop which the man who created the lyrics for the musical Sheldon Harnick, sits playing “Tradition” on his fiddle. And I also just noticed on the back of my DVD jacket that violin maestro Isaac Stern is credited as “Soloist” for the  musical’s soundtrack, something not included in the IMDB information.)

The beauty of tradition is well depicted in the Sabbath scene as the family gathers together to celebrate the holy day (“Sabbath Prayer”), as well as in the duet between Tevya and Golde when he explains events between Perchik and Hodel. “Love,” he says, “it’s the new style.” He asks Golde, “Do You Love Me?” She repeats his question as if the answer ought to be obvious. She says that after 25 years of living and struggling together and raising their five daughters, she does. Thus, the old tradition, like “the new style,” also resulted in a loving relationship, love being not just a feeling, but a series of willful acts, of living and working together.

The sad ending in which Tevye, who has pronounced Chava as being “dead” to them, refuses to speak to his daughter and Gentile husband as they leave the village, is different from the original Aleichem story and the 1939 Yiddish film based on it. (See my review of Tevye elsewhere in this issue.) And yet, still loving deep in his heart his apostate daughter, he mutters while leaving their home something that we hope she can hear.

If somehow you have missed this masterpiece, now, with the release of “the making of” documentary, is the time to see it—or if you have, to revisit it and bask again in its beauty and insights into family, tradition, love, prejudice, and oppression. It is a film that despite the passage of over half a century has never lost its power nor its relevance.

In 1905 Russia Tevye the Jewish milkman talks with God about wealth, struggles with 3 of his daughters over choice of a spouse, & suffers the indignity of exile during a pogrom.
Editor Rating ★★★★★5 out of 5
More Details