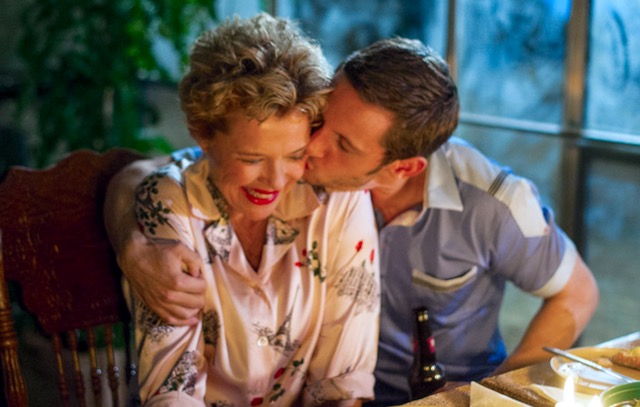 The people of long ago are not remembered,
nor will there be any remembrance
of people yet to come
by those who come after them.

They might not die in that English port, so far from the stage lights of London or Hollywood, but they do get sick there, as we see in director Paul McGuigan’s heart-felt romantic film, based on the real-life romance chronicled in Peter Turner’s 1986 memoir.

Born in Los Angeles of an English mother, Gloria Grahame (Annette Benning) rose to Hollywood fame, starring in several film noirs and winning an Oscar for her almost 10 minutes-long screen time in The Bad and the Beautiful. However, her career declined for numerous reasons, one of them being her scandalous behavior—she romanced and then years later married the teenage son of her husband, director Nicholas Ray. After years of supporting roles on TV and then contracting cancer and seemingly beating it when it went into remission, she had come to England in 1979 for stage work. One character observes that the aging star “was a big name in black and white film.”

At the theater where she was starring in The Glass Menagerie, she was drawn to the struggling young actor Peter Turner (Jamie Bell). Like many relationships, theirs does not get off on the right foot, as the following exchange shows: Peter: Has anyone ever told you that you look like Lauren Bacall when you smoke? Gloria: Humphrey Bogart. And I didn’t like it then either. Despite this and the 28-year difference in their ages, the pair enter into a passionate affair lasting about two years until her death in 1981. Gloria was also drawn to Peter’s compassionate mother Bella (Julie Walters). When the cancer attacks again, causing her to drop out of the play, she refuses medical care, asking that she be taken to the Turner house instead. Jamie, in the face of his lover’s refusal of medical care, is torn by his decision about contacting her American children, which results in their final separation.

The story may have its tawdry side, but the excellent cast make us care intensely about the fate of these star-crossed lovers. Both the principal actors are superb, with Ms. Benning perfect as the faded star, aware of the pain of her past yet still seeking love and acceptance as she strives to keep her acting career alive. Jamie Bell has come a long way as an actor from his role as the dance-loving boy in Billy Elliott, though there is one scene in which again he gets to exercise has dance skills. Vanessa Redgrave and Frances Barber are scene stealers in their one scene wherein they play Gloria’s dysfunctional mother and sister.

If you liked 2011, My Week With Marilyn, or films about movie stars and moving making in general, this is a film for you.

This review with a set of discussion questions will be in the April issue of Visual Parables.

Faded star Gloria Grahame falls in love with a 28-year-old man before her death by cancer.
Editor Rating ★★★★★4 out of 5
More Details