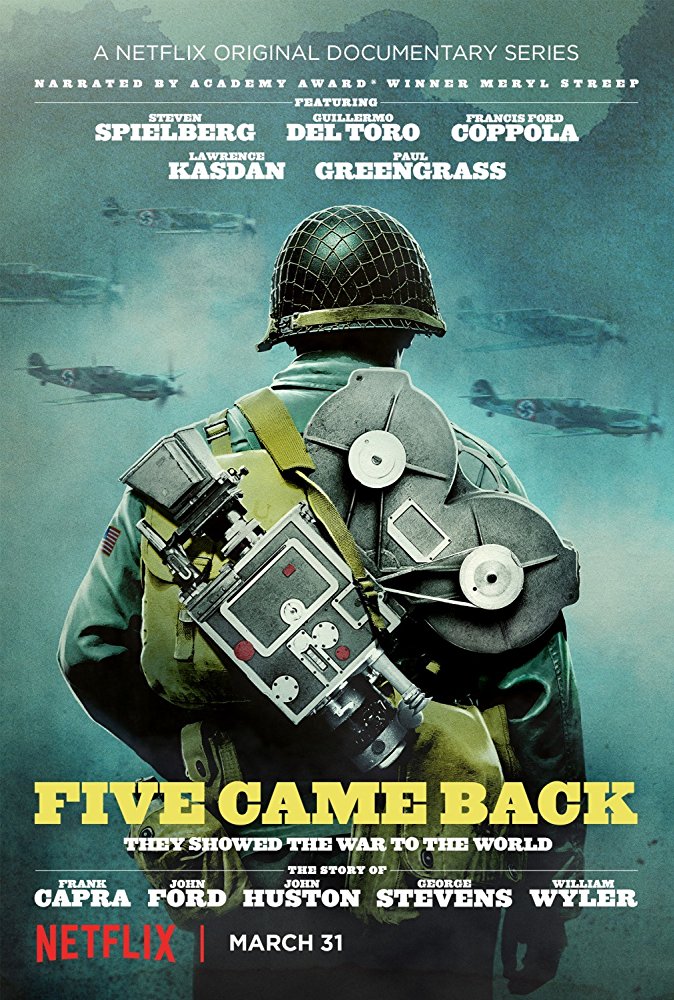 That which we have seen and heard declare we unto you… 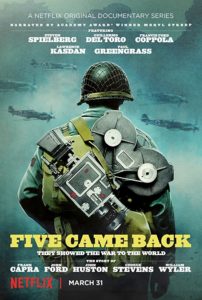 For those interested in film history and World War Two, Netflix has the perfect documentary, a rare one in that some critics have reversed their usual criticism and said they wished it were longer. Shown as a single feature in theaters to those lucky enough to live in some larger cities, it is being offered as a three-part series on Netflix. It is so good that this film alone justifies taking out a membership if you have not yet joined.

The series is based on Mark Harris’s book Five Came Back: A Story of Hollywood and the Second World War, and though I loved reading it because it contains even more incidents in the lives and careers of the five filmmakers covered, it is while watching clips from their films that one feels especially the power and scope of what they achieved. The filmmakers who volunteered their skills for the war effort are from the top tier of successful Hollywood directors during the Thirties– John Ford, Frank Capra, George Stevens, William Wyler, and John Huston. There are clips and facts about their pre-War films, as there are also about the films they made after the war. And of course, there are excerpts from the short films they made for troop training and for interpreting to the public the meaning of the war, such as the Why We Fight series.

Veteran documentarian Laurent Bouzereau and writer Mark Harris have joined forces to produce a series that viewers will want to return again and again, so much information is crammed into it. And the great thing here is that Netflix members can easily click back on to do so. The producers made a brilliant decision by inviting five major current directors to comment on the war-time filmmakers and their work– Steven Spielberg talks about William Wyler; Guillermo Del Toro comments upon Frank Capra; Paul Greengrass deals with John Ford; Francis Ford Coppola discusses John Huston; and Lawrence Kasdan analyzes George Stevens.

We learn how they had to fight government and military bureaucracies that were suspicious of their motives and goals. Army Signal Corps filmmakers resented the Hollywood directors as “entertainers,” but the films that they had been making were so boring that audiences welcomed the training and propaganda films made by the newcomers. In fact, some were both so entertaining and informative that President Roosevelt and his staff allowed films intended for the training of troops to be shown to the public.

At the time most people either obtained their news from radio and newspapers, or they went outside the home and saw the weekly newsreels shown along with their movie fare. Some of the films shot during or right after bloody battles brought to the home front the awesomeness of the war and the importance of victory. Along with filmmaker George Stevens they were shocked and horrified by the footage he shot when American troops liberated the Nazi concentration camps.

The film’s various segments are well tied together by the narration written by Mark Harris and read by Meryl Streep. It does not spare some of the flaws of the men—the over indulgence in alcohol of some, the staging of combat scenes at times weeks after the actual battle, rivalries with one another or with a government overseer—but despite their personal flaws, the film instills in us an admiration for these men who gave up comfortable lives and put their careers on hold in order to contribute to the fight against the nation’s dangerous enemies. There were times when their lives were in danger, and several of the cameramen they had assembled did lose their lives during a battle.

Two instances in the series especially stand out for me:

Those interested in social justice will appreciate the concern of some filmmakers and government officials that the Japanese not be too dehumanized so as not to poison the air after the war. Some of the filmmakers were also concerned about the Jim Crow persecution of African American soldiers, and the hypocrisy of branding the enemy oppressive while mistreating our own minorities back home. Supervised by producer Frank Capra, director Stuart Heisler faced the daunting task in The Negro Soldier of convincing skeptical African American audiences that their men should join in the “fight for freedom,” even though theirs was limited in this country.

As an additional bonus Netflix offers most of the documentaries discussed in the series: John Ford’s The Battle of Midway; Frank Capra’s Prelude to War; William Wyler’s The Memphis Belle; John Huston’s San Pietro; and George Stevens’ Nazi Concentration Camps—and more. Watching these is a great way to see the work produced by these men. What a treasure trove Netflix offers. It’s like having the key to the vault of a film historical society. And so five came back, five of the greatest filmmakers ever to work in Hollywood. Five came back, changed by what they had experienced, and through their engaging films, changed the way we would see the war, and for years afterward, the world as well.

This review with a set of questions will be in the February. 2018 issue of VP.

Stories of 5 Hollywood directors who volunteered to film WW 2 & how the war changed them & their films changed the world, told by 5 contemporary directors.
Editor Rating ★★★★★5 out of 5
More Details