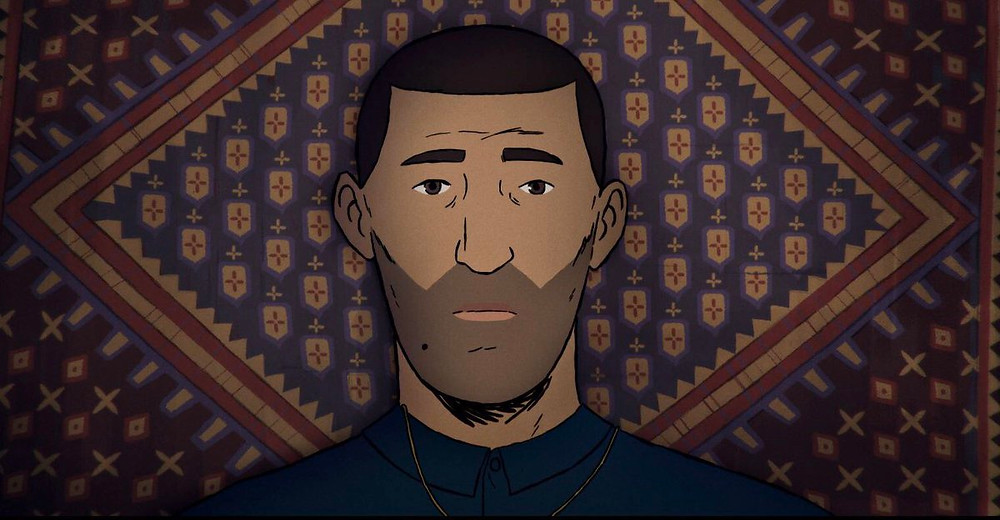 They say to the people of Judah, “Tell us what to do. Protect us like a tree that casts a cool shadow in the heat of noon, and let us rest in your shade. We are refugees; hide us where no one can find us.  Let us stay in your land. Protect us from those who want to destroy us.” 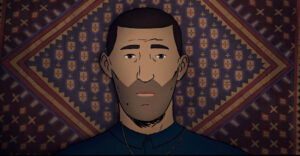 Flee , Danish filmmaker Jonas Poher Rasmussen’s triple Oscar contender about a war refugee is different from other documentaries in that it is 95% animated. The filmmaker, a long-time friend from high school days of the subject, gives his subject the fictional name of Amin Nawabi. Amin, who has achieved a successful academic career and is in a loving relationship, is convinced to make the film only by the use of animation to tell his story, rather than by appearing on camera himself. In addition to the animation, the director also intersperses newsreel and other live camera footage to illustrate the narrative.

Framing the story, one that unfolds over 20 years, are shots of Amin being interrogated by Rasmussen. Most of the time we see just the back of the filmmaker’s head, but as the film progresses and the director becomes more a part of the story, we view him from other angles.

Amin begins his story when he was 4 or 5 year s old happily living in Kabul with his older brothers, sisters and mother and father. The latter apparently was a pilot in the air force of the Soviet puppet government. Amin adored his oldest brother Saif. There are shots of him playing volley ball and flying a kite from his rooftop. When the mujahedeen pushed out the Soviets, the father was arrested and disappeared. A brother almost was drafted to fight, so the family manages to flee to Moscow where they live together in poverty in a cramped apartment. They are subject to police brutality, and when their visas expire, they are terribly afraid of deportation. During one police stop, the corrupt cop takes their money but allows them to go on.

The older brother strives to save money to pay human traffickers to transport Amin and others in a cargo container to Sweden. This goes horribly awry, with Amin back in Moscow. A second, equally perilous trip on a trawler, eventually lands him in a camp in Estonia. He manages to get to Denmark, still far from his intended destination. Following the traffickers’ instructions to destroy his forged passport and to give out a fictional story that his family members are all dead, Amin languishes in that country, confined to a refugee camp.

In one segment Amin, then about 9 to11 years old, says, “We have no idea what’s going to happen. to us. Nobody tells us anything. The journalists come and film us. We hope something will happen, but no. They go home to make TV programs… But nothing really happens. It’s just us and the guards.”

Years go by, and eventually he is able to reach Sweden and reunite with his older brother and his family. But he is still uneasy, feeling all alone because of a secret he has kept buried all through the years. As the film progresses, Amin is able to reveal that from an early age he has been drawn to men. We see posters, one of Chuck Norris especially prominent on the walls of his room. He says that he was drawn to Jean-Claude van Damme. Thus he has been fleeing not only geographically, but also inwardly, from his real self. Back in Afghanistan, he tells us, there was not even a word for homosexuality. He felt so out of it that at one point the boy asks a Red Cross social worker for medicine so he can be “cured.” The worker informs him that homosexuality is not a sickness.

Only as his new-found family starts encouraging him to meet a girl does he at last open up, fearful of their ultimate rejection. There are also scenes of the recent past when we see that he has a lover named Kasper. The latter is eager to purchase a lovely home just outside the city, but Amin holds back. He has issues not resolved, and he also has concerns in the United States. Thus, Amin’s is a very complicated refugee story, which should serve as a caution for us viewers not to lump all refugees together, to realize that every person fleeing from war and/or oppression has a unique story to tell. Being forced to lie about one’s status would be stressful enough, but the gender issue reaches very deep into his psyche.

This powerful story appeals to our hearts, though it is told simply, with a minimum of sentimentality. All refugees bear a heavy burden of fear and anxiety, as the prophet Isaiah understood long ago, but those with gender issues, who fear rejection by their own family, stagger under an even heavier burden.

Amin still is so fearful that he does not want to reveal his true name lest there be repercussions, hence his cartoon depiction serves as his avatar in the telling of his story. I don’t think it’s spoiling matters to reveal that this film will leave you feeling good and that we should be grateful both to him and to Jonas Poher Rasmussen that it is told so well.

Available on Hulu and Apple TV+.

After keeping his sexual preference a secret for 20 years, an Afghan refugee tells his harrowing story on camera via animation & old footage.
Editor Rating ★★★★★5 out of 5
More Details