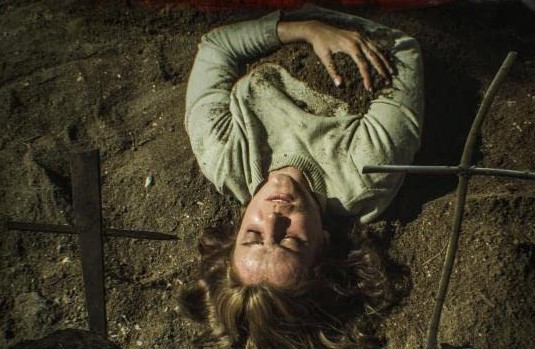 My God, my God, why have you forsaken me?
Why are you so far from helping me, from the words of my groaning?
O my God, I cry by day, but you do not answer;
and by night but find no rest.

Russian director Aleksey Muradov’s film lives up to its title. It ranges over 100 years of bloody warfare in Russia, beginning with the Russian civil war. Co- written with Dmitriy Lanchihin, it’s common theme is the horrible cost, each segment bound together by a baby and the fate of the woman connected with the infant.

Forgotten by God examines the horrors of war at close range. Directed by Aleksey Muradov and written by Dmitriy Lanchihin, this Russian drama is at once poetic and painfully realistic as it explores a century of war and its broader impact on the innocent. Stories jump the decades, revealing the cycle of violence that touches even those who aren’t in battle. Forgotten by God is set across four different time periods:

Aleksey Muradov merely records the tragic events. He does not moralize or comment on them. He does not need to to get his point across that in war the lives of civilians are at risk as much as those of combatants. Each of the lives chronicled in the film seem to have been forgotten by God.

This film was made five years ago a little after Putin’s first invasion of the Ukraine. I wonder if this influenced him to create this indictment of war, though in the fourth segment the mother returning is a Russian-Ukrainian, so those who murdered her children were what we would consider loyalist Ukrainians. But does this matter? I wonder too where this filmmaker stands today on the matter of Putin’s “military exercise”?

The madness of war & the deaths it brings to innocent civilians are depicted in the 5 segments of this film set in Russia & Ukraine in 4 different wars.
Editor Rating ★★★★★5 out of 5
More Details