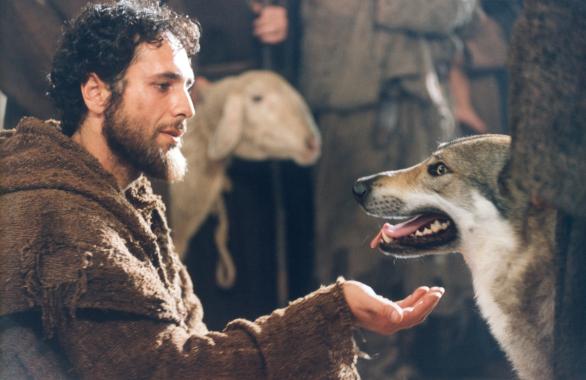 Do not store up for yourselves treasures on earth, where moth and rust[g] consume and where thieves break in and steal; but store up for yourselves treasures in heaven, where neither moth nor rust[h] consumes and where thieves do not break in and steal. For where your treasure is, there your heart will be also.


Jesus said to him, “If you wish to be perfect, go, sell your possessions, and give the money to the poor, and you will have treasure in heaven; then come, follow me."

Italian director Michele Soavi serves up a very imaginative version of the life of Christendom’s most beloved saint, Francis of Assisi. Protestants, as well as Roman Catholics, regard him as second only to Christ in his devotion to God, the poor, and to animals and the environment. One of the distinctions of this made for television film is that the script, by  Salvatore De Mola, employs far more Scriptural quotes than the other four lives of the saint that I have seen—Flowers of St. Francis (1950); Francis of Assisi (1961); Brother Son, Sister Moon (1972); and Francesco (1989). Oh yes, there is also the docudrama The Sultan and the Saint (2016).

I write ”imaginative” because so much speculative and fictional material is added, it being an hour before we get to Francesco’s break with his family. The film opens with him and Chiara (Claire) playing together. He is hanging upside down, telling her that the sky is holding up the world, an observation he will make years later. After the titles we see him (now played by Raoul Bouva) carousing with his young adult friends. In one scene he follows Chiara (Erica Blanc) through the woods to some ruins where lepers and the poor have set up living quarters. She is bringing bread to them.

A revolt breaks out in Assisi, the lower classes driving out the ruling noble family, whose head vows to return. Francis and his friends join the defensive army and set forth to do battle with forces of the nearby city to which the Assisi nobleman has fled for support. After much blood and carnage, Francesco is taken prisoner and thrown into a dungeon. A fellow prisoner has managed to smuggle in a small version of the Gospels, its cover and loosened pages tattered. He reads portions of Jesus words, mostly from Matthew about eschewing wealth and giving to the poor, and even joining them. Suspecting that he has a book, the guards seize and torture him, but he has passed his treasure on to Francesco and manages to refuse to reveal his secret. Francesco stealthily reads passages through a small hole in the wall to a fellow prisoner, who years later will join his band of monks. Meanwhile, back in Assisi to which Francesco’s good friend Bernardo (Gianmarco Tognazzi ) has returned with the report that his friend was killed in battle, Francesco’s family grieve openly, he being their only son.

The older couple are overjoyed when their son returns, even though he has a fever. His father’s joy turns to puzzlement and then to anger when he recovers and starts giving cloth and gold coins. There follows the familiar story, though unlike the 1989 version, we are shown just the upper portion of Francesco’s nude body when he disrobes and gives back his clothing to his outraged father who has brought him to the bishop for judgment. The episodes of rebuilding the ruined San Damiano, gathering a following from friends and would-be skeptics, begging and persecution, his trip to Rome, the later dissension among his monks over his strictures to embrace poverty, his illness and reception of the stigmata—all but the visit to Rome are told in quick succession. In the latter, after at first being rejected by Pope  Innocenzo III (as Tony Bertorelli), the Pope carries on a fairly lengthy (for this film, and especially in comparison to the other depictions) discussion of the church and serving Christ.

As can be seen by the above, director Michele Soavi’s version is very different from the others I’ve reviewed (Brother Sun, Sister Moon and Francesco (1989). The introduction of class conflict in Assisi made me wonder if at least one of the five credited scriptwriters was a Marxist. Their script is reverential toward the saint but does not take a mystical approach to any of the famous miracles. When Francesco experiences his call before the San Damiano crucifix, we do not hear voices. When he confronts the wolf, and later a flock of birds alight while he is preaching, there are no special effects—not even when he receives the stigmata. We see the latter while he is being tended to by one of his devoted followers. Lovers of the saint will want to see this version giving us a fresh slant on him, one that emphasizes more than any other the impact of Jesus’ teaching on wealth, poverty, and serving the poor. Here is a man who took those teachings literally, giving up everything on behalf of his Lord and the left-out.

Available for sale at the Ignatius Press website:  https://www.ignatius.com/Saint-Francis-P2361.aspx.

To see brief descriptions about all the films made about the saint, click here. Though it does not go into much detail, the author has included several clips and even the entire 1927 Italian production, which is from YouTube.

The story of Francis of Assisi is retold, from his youth days through his conversion & friendship with Claire to his stigmata & death, with many embelishments & Scripture reference
Editor Rating ★★★★★4.5 out of 5
More Details