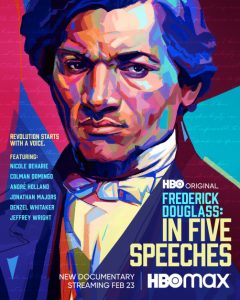 Then the Lord said, “I have observed the misery of my people who are in Egypt; I have heard their cry on account of their taskmasters. Indeed, I know their sufferings, 8 and I have come down to deliver them from the Egyptians, and to bring them up out of that land to a good and broad land, a land flowing with milk and honey...


For it is not light that is needed, but fire; it is not the gentle shower, but thunder. We need the storm, the whirlwind, and the earthquake.

Although in just 54 minutes director Julia Marchesi cannot possibly include all of the massive amount of information in David Blight’s Pulitzer Prize-winning biography, Frederick Douglass: Prophet of Freedom, she does an excellent job in portraying the man and his great influence upon his times, and especially upon President Lincoln. By focusing on five of his most important speeches and pairing them with five black actors who render mesmerizing performances of them– Nicole Beharie, Colman Domingo, Denzel Whitaker, Jeffrey White, and Jonathan Majors– each matched in age to the orator when he gave the speech, Marchesi shows us what a tremendous public speaker he was and how his impact on his times grew as he progressed in age and intellect.

Given by “the most famous black man of the 19th century,” the five speeches well support the claim that he was Lincoln’s equal in public speaking. The speeches are:

Along with cogent observations made by the actors are insertions of commentary by scholar/Filmmaker, Henry Louis Gates. and historian, David Blight. The film is narrated by by André Holland. If only history had been presented to us so graphically during our high school days in our American History classes!

This review will be in the April issue of VP along with how to access the excellent Discussion Guide offered by the film’s producers. If you have found reviews on this site helpful, please consider purchasing a subscription or individual issue in The Store.

Through 5 great speeches performed by 5 Black actors, interspersed with cogent commentary, we are shown the importance of this prophetic orator to American history.
Editor Rating ★★★★★5 out of 5
More Details