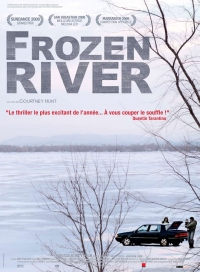 Teach me, O Lord, the way of your statutes,
and I will observe it to the end.
Give me understanding, that I may keep your law
and observe it with my whole heart.

When Gentiles, who do not possess the law, do instinctively what the law requires, these, though not having the law, are a law to themselves. They show that what the law requires is written on their hearts, to which their own conscience also bears witness; and their conflicting thoughts will accuse or perhaps excuse them on the day when, according to my gospel, God, through Jesus Christ, will judge the secret thoughts of all.

Courtney Hunt’s somberly  realistic film focuses upon the distraught lives of those whom our politicians claim that they want to help, those left out of the American Dream. In upstate New York by the Canadian border Ray Eddy (Melissa Leo) is left with two sons and unpaid bills when her husband runs off with their meager savings. When the agent drives up with the other half of their double-wide trailer, he refuses to leave it when Ray tells him that although she does not have the money, she will pay for it soon. Unless she comes up with the money by Christmas, he responds, she will lose the $1500 down payment. She also is in danger of losing the family’s large-screen TV set because of failure to keep up their payments, a sad setback in that it provides the two boys with an escape from their dreary plight.

5-year-old Ricky (James Reilly) keeps asking embarrassing questions about “When is Daddy coming home,” but 15-year-old T. J. (Charlie McDermott) knows the score all too well. In fact Ray has her hands full convincing T.J. that he needs to stay and finish school, rather than drop out and help the family by getting a job. His retort that he could make more money than she does stings because hers is a part-time job at the near-by Yankee One Dollar Store. Her plea to her boss that she be taken on full-time has fallen on deaf ears. Christmas is almost at hand, but Ray is so concerned with their lack of money that she is not even thinking of buying presents. T.J., loving his little brother in spite of being saddled with his care while their mother is away, is concerned that Ricky not wake up to disappointment on Christmas Day. He tries a telephone scam on an old lady living on the Mohawk Indian reservation to raise some money to buy Ricky the Hot Wheels set he covets.

Lila Littlewolf (Misty Upham) lives in a tiny trailer on the Reservation and, when she is not smuggling illegal aliens across the frozen St. Lawrence River that forms the border, works part time at the Mohawk bingo casino. We know nothing about her at first, the filmmaker revealing bit by bit her situation, the process similar to an archaeologist’s slowly removing the dirt covering up a long buried mosaic in a temple, thus revealing its beauty. It is at the casino that Ray comes upon her while searching for her husband.

Lila had taken over the parked car when Ray’s husband, leaving the keys in the ignition, had left town on a bus. Lila does not want to give up the car, but Ray is a “pistol packing mama,” and so the Native American reluctantly concurs after a struggle. Both of them needing the money, the two join together in an uneasy scheme to smuggle some Chinese, and then some Pakistani, illegal immigrants across the river and deliver them to a seedy motel on the U.S. side. Thus suspense builds: we worry about the ice on the river cracking; the police catching them—an officer warns Ray in one scene that the person he had seen in her car is known as a smuggler; danger from the rough men who pay them at both ends of their runs; and what will happen with Ricky and T.J. who are left to fend for themselves while their mother is away.

This is a somber and moving story about the hard choices that those left out of the mainstream of society must make. Lila has an agonizing problem of her own: her mother-in-law took her baby away when she went into the hospital to deliver it because the older woman did not think she would make a fit mother. Lila engages in the risky smuggling business because she wants to provide money for her infant son. At the climax of the film the two must make hard decisions that will change their lives forever. What happens will, I suspect, satisfy most viewers, even though we are left wondering about their long-term prospects. The film does not try to solve the social problems of the characters, but it does help us to understand two desperate women caught up in situations beyond their control—and yet who do try to control their own reactions to events, and thus maintain their humanity.

A set of 10 discussion questions are include with this review in the Fall 2008 Visual Parables.