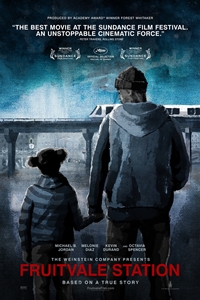 ‘Why have you forgotten me?
Why must I walk about mournfully
because the enemy oppresses me?’
Psalm 40:9

Even though the opening cell phone video shows us the tragic outcome of a scuffle with San Francisco transit police, director/writer Ryan Coogler’s film, based on a true story, is a fascinating study of the last day in the life of 22-year-old Oscar Grant (Michael B. Jordan). We are taken back twelve hours earlier when Oscar and his wife (or girl friend?) Sophina (Melonie Diaz), are in their apartment at the beginning of New Year’s Eve 2009.  Burdened with a history of run-ins with the law, Oscar is trying to turn his life around—although in this scene he is trying to placate her because she is upset that he has had an affair with another woman. Obviously adoring their  4-year-old daughter, Tatiana (Ariana Neal), he is able to convince Sophina that he will not betray her again.

We follow Oscar through a series of ups and downs. He takes Tatiana to school; meets friends; shops for food for the party his mother will host that night; helps a clueless young woman at the supermarket with a recipe by connecting her to his grandmother; tries but fails to get his job back at the grocery from the manager, who had fired him for being late too often; texts his friends about getting together that night; talked over the phone with his sister who badly needed some cash; been tempted to acquire money by selling the bag of weed he had hidden away, but, genuinely wanting to go straight, dumps it into the Bay. Interspersed are flashbacks to his prison days, two low points being his fight with another prisoner and the day his mother Wanda (Octavia Spencer) tells him she cannot bear to come and visit him any more.

That night at his mother’s house in Hayward, a suburb, everyone, young and old has a great time. When he is about to set out with Sophina and their friends to go out to celebrate the New Year by watching the waterfront fireworks, his mother suggests they take the BART instead. She is worried that their drinking would impair Oscar driving. It is a suggestion that will haunt her all her days.

The group has an enjoyable time, even when the train stalls, delaying their arrival for the fireworks display. In the crowded train car an inter-racial harmony prevails—whites, Latinos, and blacks all laugh and exchange greetings together as the New Year. But this is soon swallowed up in the mayhem that ensues when Oscar’s prison past catches up with him.

The film leaves viewers saddened and upset that even though we have elected a black president, racism is still a strong force in our society. It is bad enough when it exists among the general population, but among police officers it can be deadly, as we see by the way in which the young blacks are treated when they are dragged off the train following Oscar’s attack by a man he had known in prison. It would, of course, have been wise if the ill-treated black men had not protested their abuse, but it would have taken more discipline than any of them possessed to have suffered in silence.

As the aftermath of the  Trayvon Martin shooting lingers, this film will add fuel to the debate over the way blacks are viewed and treated around the nation. The film makes clear that even in the 21st century we are far from Martin Luther King Jr.;s vision of the “beloved community.” If black males in America accept the faith of their mothers, well might they recite the words of the anguished psalmist any time they venture beyond their ‘hood, “Why must I walk about mournfully/because the enemy oppresses me?”

For Reflection/Discussion
1. Despite claims that this is a nation of “equal opportunities,” what burdens does Oscar carry that few white males his age do? How do we see that he is trying to overcome them? What do you think of the claims of some that he is pictured in too positive of a way?
2. Had he not met with such an untimely end, what hope do you see that he might have been successful going straight—especially in light of his family needs and his lack of employment?
3. What do you think of the manager’s turning down Oscar’s request to get his job back? How is his firing the consequence of his own behavior? And yet how is the matter of punctuality also a difference in cultures?
4. What do you think of the blended black and Latino families? How well do we see them getting along?
5. In what scenes do you see grace in operation? (Sophina’s acceptance of Oscar despite his betrayal; Oscar helping the woman at the supermarket;
6. How is the moment of celebrating the New Year on the subway train a foretaste of the kingdom of God (or MLK’s “beloved community”)?
7. How did you feel in the sequence when the BART police officers took the black men off the train? Did they look for the white man who started the fight? Was there any sign of the officers listening to either the blacks or the passengers? Do you think this is because their minds were closed, accepting the basis of racial profiling, facts be damned?
8. Have you or someone you know seen such treatment? What does this suggest that Americans need to do to eliminate such treatment? What similarities, if any, do you see between Oscar and Trayvon Martin? What have you and/or your church done to foment racial understanding?