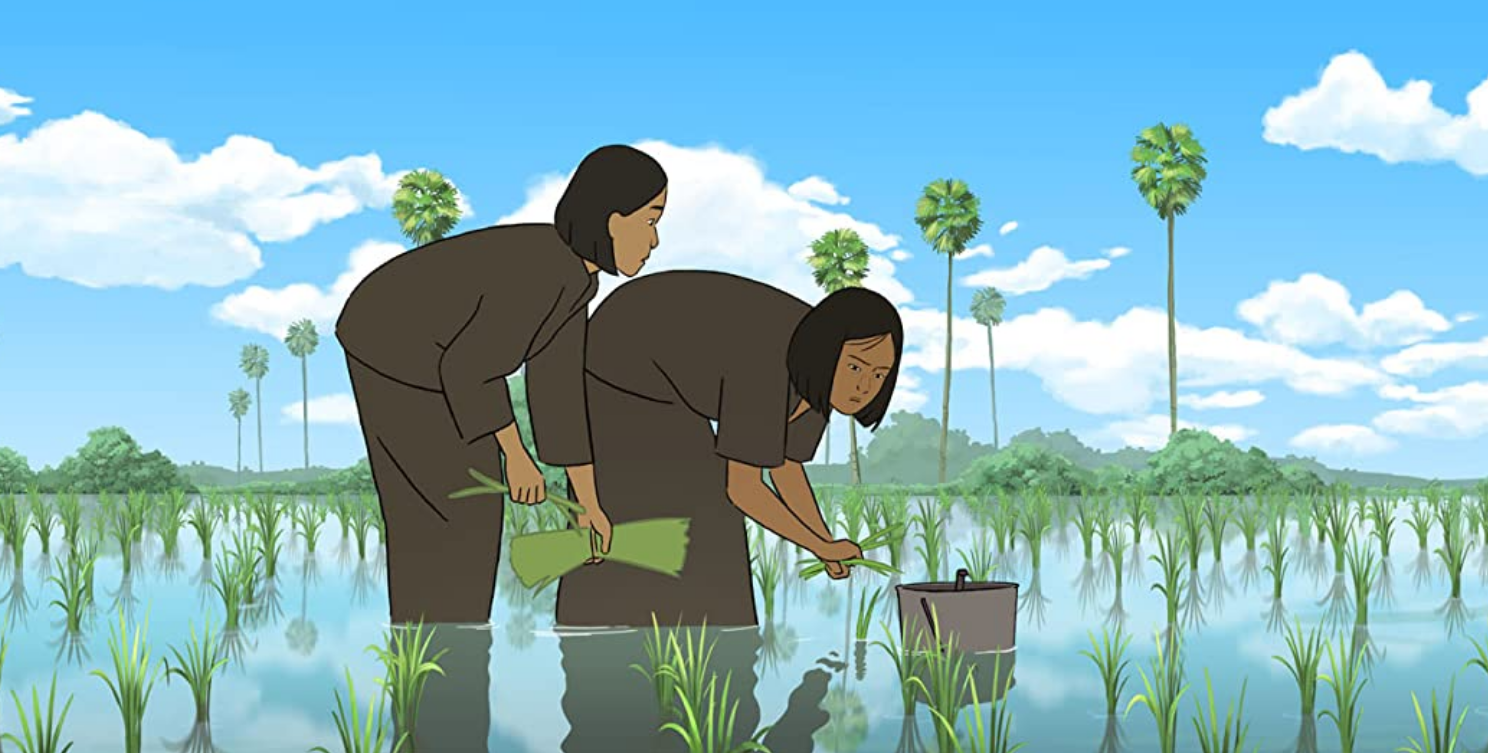 For no one can anticipate the time of disaster. Like fish taken in a cruel net, and like birds caught in a snare, so mortals are snared at a time of calamity, when it suddenly falls upon them.


Rescue me, O my God, from the hand of the wicked,
from the grasp of the unjust and cruel.

The words of the first Scriptural quote above certainly apply to  the Cambodians sharing a family meal at the beginning of writer/director Denis Do animated film. His script, co-written by Magali Pouzol and Elise Trinh, was inspired by the experiences of his mother under the murderous Khmer Rouge, as well as of other survivors with whom he talked over a span of two decades. Although the film covers the same horrendous territory as 1984’s The Killing Fields, Do’s use of animation and depiction of violence off-camera, makes the film suitable for a family to watch—IF adults are willing to explain the incidents of beatings, starvation, execution, rape, and suicide. This is a film about a family, but it is not your usual family film.

The title refers to the ancient kingdom that comprised most of Cambodia and neighboring countries. In Phnom Penh, Khuon (Louis Garrel), his wife Chuo (Bérénice Bejo), their 4-year-old son Sovanh and extended family are  enjoying their meal together when the Khmer Rouge move into the city. The following day they are crammed into their car and forced to leave the city along with the rest of the population. Khuon soon discovers that to ask a question about their destination is to risk a beating. The family is forced to walk when the soldiers declare their car is part of the imperialistic way of life. Despite their pleas that their possessions are inside, the cruel men set it on fire. Evoking the name of the Communist Party, Angkar, as if it were God, the soldiers declare that no one is allowed possessions anymore. Angkar will watch over them! The march is not only arduous, but dangerous, the river they must wade across laced with land mines.

As they approach the river, their little son Sonah becomes separated in the crowd. Grandma turns back to find him, but the guards force Khuon and Chuo to continue wading into the water. Arriving at last at the camp, they discover that their cousin Sok (Thierry Jahn) is one of the guards. He spouts the party line, refusing to allow Khuon to go to the camp, just a few miles away, where it is said the children are kept. Relations between husband and wife become strained, the desperate Chuo believing he is not trying hard enough. True Believer Sok relents, trying vainly to secure permission from his superiors to allow his cousin to leave the camp. Eventually, he will even secretly send Khuon forth, but the father will find that the children have been moved to another camp. Sok will prove that a fanatic of the Revolution still can be human—and pay a steep price for his humanity.

Life in the camp is a living hell, the daily allotment of rice not enough to sustain the toilers working in the paddies under a hot sun. Prisoners strive to survive, one by selling her body for food, which makes her the object of great hostility. Chuo refuses at one point to accept food from such a person, preferring her dignity over food. At various points we see that it is the love between her and Khuan and her passion for finding their lost son that keeps her going. Others give up, such as the woman who is raped, afterward hanging herself.

The animators’ simple line drawings of the people are set against the background of a gorgeous landscape. Art director Michael Crouzat depicts a spectacularly beautiful country—picturesque rice paddies and distant mountains, a setting sun whose light casts a red hue over everything—that stands in stark contrast against the ugliness of human fanaticism.

The violent acts are subtly shown. In one scene men dig a hole while armed guards stand watch, the camera not showing their execution. A head is bashed by a rock during a struggle, but the impact not depicted. The woman is lured into an empty hut, but the rape itself left unseen, as is her suicide. Even the aftermath of the latter is not fully visible, the leafy tree branch allowing only the lower part of her body to be seen.

The story unfolds over a four-year period, beginning on April 17th, 1975, when the Khmer Rouge took over the capital, through 1979, when Vietnamese forces invaded and defeated the tyrants. By the latter time Khuan and Chuo have found Sonah and are fleeing toward Thailand, but their ordeal is far from over. Their perseverance has got them thus far, but bands of the Khmer Rouge are still at large. Also, a band of angry survivors seeking revenge on anyone connected with their oppressors block the way at another point. There is a sad note of tragedy appended to the refugee’s victory.

Occasionally a bit difficult to follow, this nonetheless is a powerful story covering both the depth of depravity to which humans can sink and the heights of bravery and self sacrifice they are capable of. Several moments of grace shine like candles in the darkness. Like some of the stories from the horrendous genocide that unfolded on the other side of the world in Europe during the Nazi era, this genocide includes incidents of bravery and cowardice, cruelty and kindness. It too deserves to be remembered, “lest we forget.” The filmmakers have provided us with a means to share the compelling story with our children—but their caretakers must be willing to sit beside their young charges and be willing to explore the inevitable questions that will arise.

Based on the director's mother, this is the story of one Cambodian family forced by the Kymer Rouge to leave the city and labor on a starvation diet in the rice paddies.
Editor Rating ★★★★★4.5 out of 5
More Details