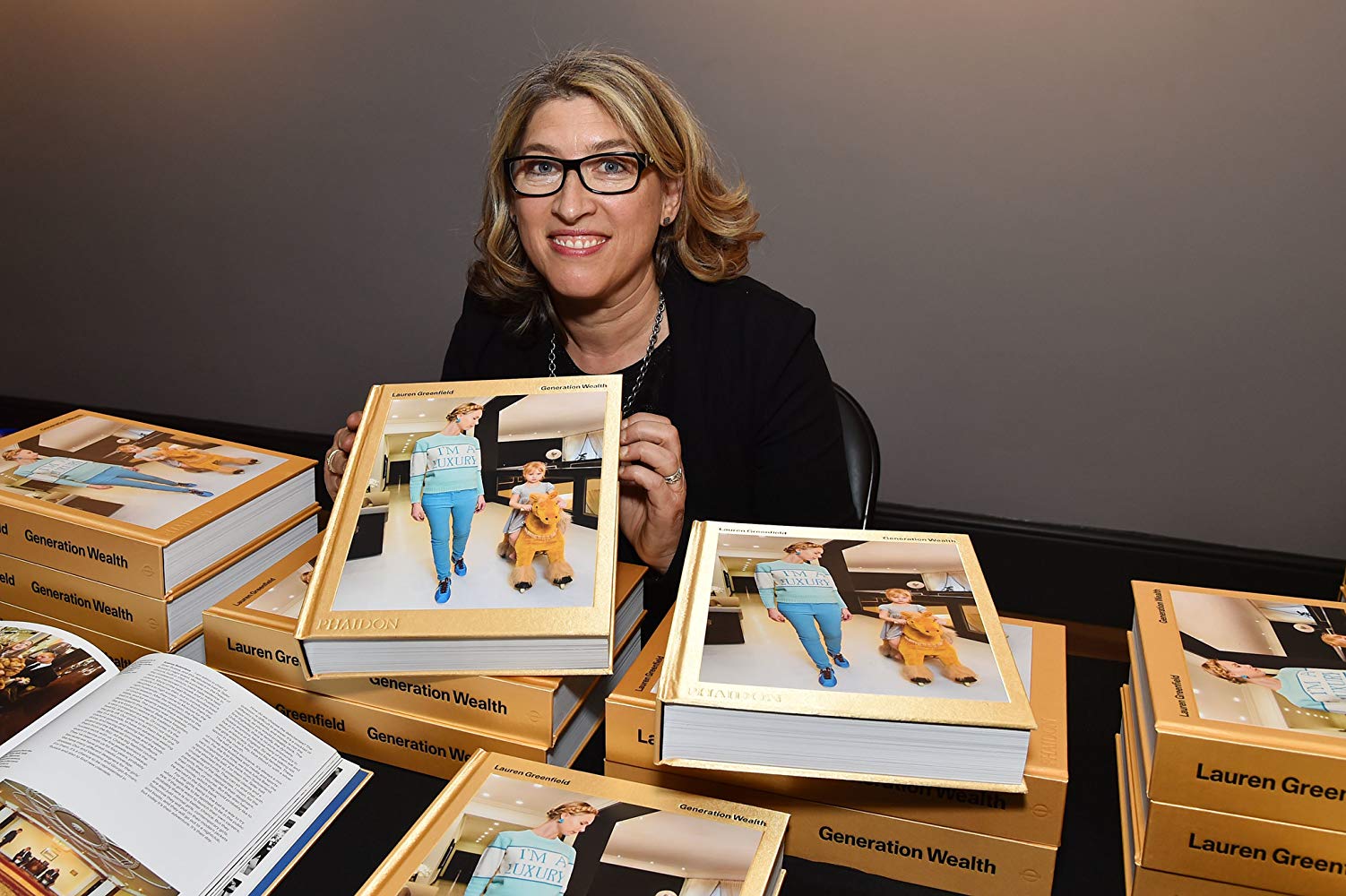 For over 25 years Lauren Greenfield has been photographing and making documentaries of the rich and famous. Now, in conjunction with the publication of a hefty 500-page book of the same title, she has produced a documentary resulting from her culling through the thousands of images and videos she has collected, a process she began about 10 years ago. She revisits some of the people she had photographed and filmed, and also includes a section on the impact of that her voyeuristic work has had on her family. Her teenage son Noah, frankly says, “I got used to growing up without you around. The damage has been done.” Ouch.

Some of the people Ms. Greenfield visits again:

– the rich couple featured in her film Queen of Versailles (See my review in the Sep/Oct VP) who poured money into building America’s largest home, based on a French palace.

-Eden Wood, who at the age of four was dressed up by her parents as a show girl and exploited through the years in beauty pageants and other venues, the child once expressing that all she wanted was a room full of money.

– Florian Homm, a fugitive former hedge fund manager who bilked millions of dollars from his clients. He

bought his 15-year-old son a Dutch prostitute—the boy tells the story while his girlfriend sits beside him!

There is also the story of a 40-year-old woman executive seeking to birth a child through a hired substitute; a woman so discontented with her looks that she travels to Brazil for what turns out to be disastrous plastic surgery–plus far too many gratuitous shots of strippers and pole dancers in Atlanta.

In China a wealthy couple live in a mansion that is a duplicate of The White House, which faces a smaller duplicate of Mt. Rushmore. Elsewhere in that nation a woman teaches the new rich how to pronounce famous brand names–Louis Vuitton, Versace, and Dolce and Gabbana. (This made me think of my oldest son’s experience in a large Texas city of hosting a married pair from China. During their several weeks stay they turned down all his suggestions to visit the art museums and other cultural sites, instead spending all their time shopping in the city’s upscale stores for expensive items to take home.)

The film maker even visits Iceland to capture the story of a fisherman who, during that nation’s brief prosperity, became a banker, moved into a lavish mansion, and then when the bubble burst, went back to fishing.

Journalist/professor Chris Hedges appears at various times, explaining that ancient Egypt was in decline when it built the pyramids: “Societies accrue their greatest wealth at the moment they face death.” The abandonment of the gold standard and the printing of paper money with nothing to back it up, and a host of other causes are mentioned. The rise and fall of nations is just part of history’s ebb and flow, he says, “The difference is when we go down, the rest of the world is coming with us.”

All of this could be considered a visual commentary on the Preacher’s observation in Ecclesiastes, “The lover of money will not be satisfied with money; nor the lover of wealth, with gain.” Some of her subjects do come to an awareness of the futility of their former lives. Ms. Greenfield’s former black classmate in high school, who became the rapper called Future, early in the film poses with stacks of money, but later focuses upon his family. One character declares that having relationships with family and friends now is what counts.

There is a danger that some viewers will see the film as if it were a tour of the vulgar and repulsive, much as some tourists visit the slums and markets of the third world, returning to their lavish homes relieved that they are not like “those people.” Others probably will find the images of excess wealth and consumerism very disturbing, but the analysis and pronouncements are not as profound as the film maker thinks.  (I especially found ironic, as well as disgusting, the image of a pendant featuring the gilded head of Christ, prince of paupers, encrusted with jewels.) Still, her examining her own obsession with her documentary career and laying this alongside the addictions of her subjects to money and beauty shows courage and insight. As viewers we might be tempted to laugh at and look down upon the people in the film, but hopefully not for long, especially if we have ever watched an episode of Keeping Up with the Kardashians or Lifestyles of the Rich and Famous. “The one without sin, let him (her) throw the first stone!” By the way, appropriately enough, the host of Lifestyles… makes a brief appearance in this film.

If you are bothered by the problem of growing income equality in our world, this is a must-see film.

This review will be in the November issue of VP along with a set of questions for reflection and/or discussion. If you have found reviews on this site helpful, please consider purchasing a subscription or individual issue in The Store

The documentary explores ostentatious display of wealth and the debilitating effects of the pursuit of money all around the world.
Editor Rating ★★★★★4 out of 5
More Details