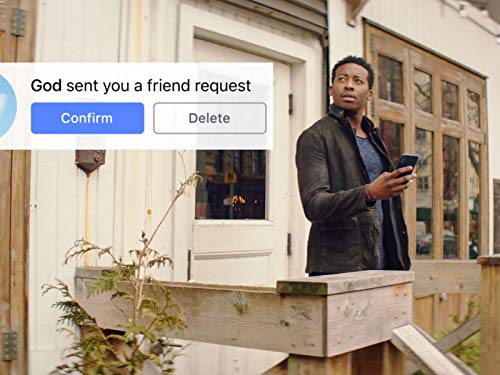 Now the boy Samuel was ministering to the Lord under Eli. The word of the Lord was rare in those days; visions were not widespread…

the lamp of God had not yet gone out, and Samuel was lying down in the temple of the Lord, where the ark of God was. Then the Lord called, “Samuel! Samuel!” and he said, “Here I am!” and ran to Eli, and said, “Here I am, for you called me.” But he said, “I did not call; lie down again.” So he went and lay down. The Lord called again, “Samuel!” Samuel got up and went to Eli… 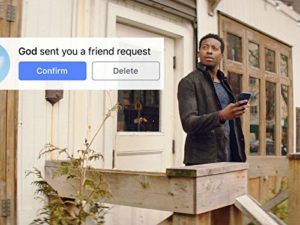 Somehow this series sneaked up on me—would have missed it but for an announcement about it in our Sunday newspaper. This is the second time this year that CBS tackles the tricky subject of religion. You might recall my enthusiasm for the few episodes of Living Biblically, which I reviewed in the February issue this year, and which the more I saw of it, the less interested I found it. The pilot for this new serious also starts out well, and its more serious approach, interspersed with humor, bodes well.

Created and written by Bryan Wynbrandt and Steven Lilien, the series stars Brandon Micheal Hall as Miles Finer. Although his father, the Reverend Arthur Finer (Joe Morton) has been the preacher at Harlem’s Trinity Church for 25 years, Brandon is now estranged from him, having become an atheist for reasons revealed later in the episode. In fact, he hopes that his podcast, dedicated to debunking what he regards as the comforting myth of God, will be picked by Sirius.

Then comes the Facebook “friend request” from God on his smartphone. Of course, he is skeptical, believing it is a joke, so he pays it not attention. But he keeps getting pokes from the “God Account,” and two surprises—one mysterious, and the other, quickly debunked in a funny way. He spots a cloud in the sky that looks just like the one on the Facebook account. The other is what at first looks like a burning bush near the curb. No doubt having watched Charleston Heston in The Ten Commandments, he is taken aback, but then when a shopkeeper dashes out to douse the flames, he sees it is just a trash container.

Determined to find out who keeps harassing him with the friend invitation (remember John Denver having a similar problem with a note from God in Oh, God!?), Miles talks with his coworker Rakesh (Suraj Sharma), a hacker who prefers to keep this a secret. The God account suggests John Dove as a friend, which leads Miles to a life-saving encounter with the man. Then it is to a writer named Cara Bloom (Violett Beane), whose back story proves far more extensive than Dove’s—and which might even lead to a romance because she joins Miles in his quest for the identity of the sender of the Friend messages.

The last half of the film skates into soap opera territory, including a reunion with Miles’ father—all within the scope of a 43-minute teleplay—but I still found this moving and enjoyable. The cast does not overact, as was the case too often in Living Biblically. The father-son relationship between Miles and Rev. Finer could be developed so as to be as interesting as the possible romantic one between Cara and our hero. And though less developed, there is even a pairing up of Rakesh and a young Indian woman whom his mother has foisted onto him as a date.

The reason for Miles’ flight from faith makes this episode a good one for those of you who are preachers and are using the Common Lectionary. As you probably know the four passages from the Hebrew Bible for October are all from the Book of Job. * If you plan to preach a sermon series on this book, God Friended Me will provide some good illustrative material. The pilot episode is available on line at https://www.cbs.com/shows/god-friended-me/, and presumably the others will be also. So far only four are listed on IMDB, so it might be well to contact CBS and let them know your opinion if you like the series. The audience for Living Biblically dropped off drastically after the first few episodes, and the finest religious series ever aired, Nothing Sacred was cancelled when ultraconservative Catholics attacked it. Thus, the fate of a religious series is always precarious, no matter how good it is—and this one is off to a good start.

*See my reviews in the Sept. VP of the videos The Prophet Job and Job.

A young atheist,upset & puzzled when he keeps receiving Facebook friending messages, sets out on a quest to discover who is behind the campaign,
Editor Rating ★★★★★4 out of 5
More Details