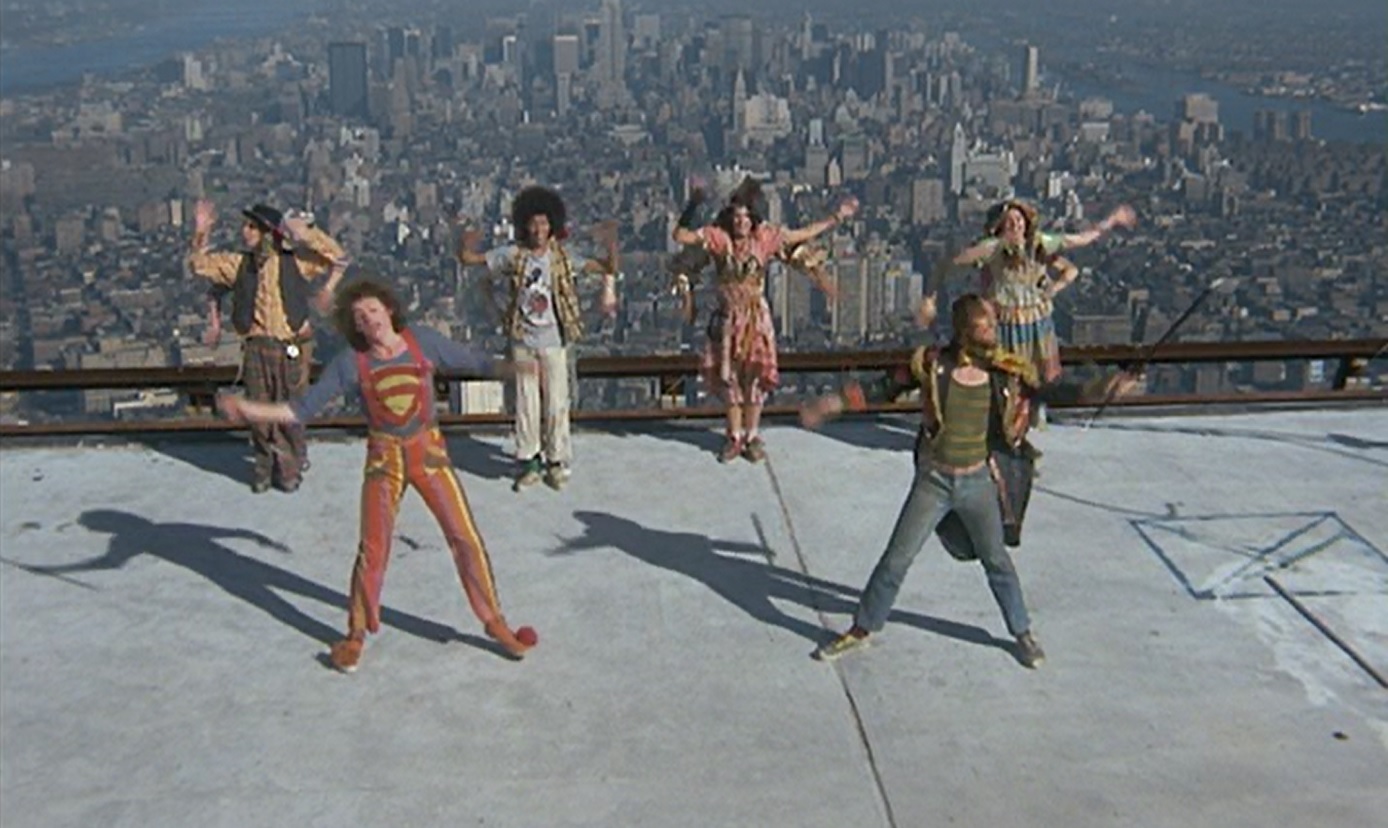 But there are also many other things that Jesus did; if every one of them were written down, I suppose that the world itself could not contain the books* that would be written.
*or movies (my addition)

In honor of the 19th anniversary of 9/11 we are bringing up from the archives of 1997 this short review of the popular musical  GODSPELL , a part of one scene which was filmed atop one of the Twin Towers.  Check my blog for an article on films dealing with 9/11.

Good news! After more than a twenty year wait the 1973 film version of the popular musical play based on the life of Jesus is finally available on video. The film has generally been panned by the critics, especially the high brow ones based in New York City, but audiences have paid them little heed. The play has been staged thousands of times by church groups, dinner theater troupes, and community theaters. And the 16 mm film version was so popular that it rented for $200  a showing and had to be reserved well before Christmas if you wanted to bring it to your community. But now any group can buy it for a fraction of its former rental price, and this includes public performance right as well.

There are some wonderful opening shots of Manhattan and it somber, gray-tinted denizens. The John the Baptist appears with his cart, and then, as he baptizes Jesus in a fountain, a few somber citizens are transformed into a roving band of gaily dressed performers bringing joy and laughter with them. The film  is a product of the Flower Power era, and yet its joy and the child-like openness of its clown-Jesus and his followers is still affecting. I’ll have more to say on this in a future issue when I want to explore the theme of comedy and the gospel.  Also, I’ll be writing a discussion guide.  Anyone leading a youth group, or who has children (young or teens) at home will want a copy of this delightful concoction!

The above is from the March 1997 VP. The following is from my book JESUS CHRIST: Movie Star.

Godspell, also released in 1973, was the second of two musical retellings of the life of Jesus that came out that year. It also is a Jesus Transfigured film in that it is set in 20th Century Manhattan Christ is a clown who charms the hearts of his followers by singing and dancing his teachings. Victor Garber plays Jesus in a Superman T-shirt as the painted-face leader of a troupe of clowns. He and John the Baptist bring joy, merriment and love to an assorted group of Manhattanites trapped in the  urban routine of noise and rush. The script focuses on the teachings, rather than the miracles of Christ, and presents them in highly imaginative ways through pantomime, vaudeville jokes and pratfalls, and of course, in song and dance. The movie is more than half over before we see the opposition to Jesus, embodied in a huge puppet-machine that snarls at Jesus, challenging his authority to teach and make changes. When Jesus tears away the cover of the machine, we see that the disciples are within it, manipulating its arms—perhaps implying that they too harbor the sin of unbelief and opposition to Christ:

The mood of the film immediately turns from that of merriment and spontaneous joy to one of somber introspection as Jesus gathers his friends for his Last Supper to prepare them for his impending crucifixion. Unlike SUPERSTAR there is a type of resurrection. Jesus’ disciples carry his body aloft along a city sidewalk as they chant “Long Live God” in somber fashion. This changes to the opening song “Prepare Ye the Way of the Lord” as they round a corner and are thrust back into the turmoil of the city, showing that Christ is alive in them amidst the hustle and bustle of life.