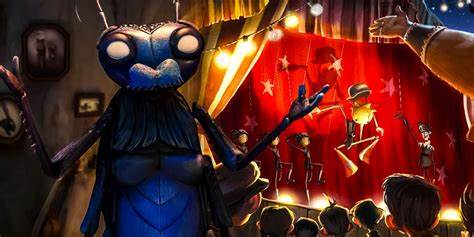 
Children, obey your parents in the Lord, for this is right. “Honor your father and mother”—this is the first commandment with a promise— “so that it may be well with you and you may live long on the earth.


The living know that they will die, but the dead know nothing; they have no more reward, and even the memory of them is lost. Their love and their hate and their envy have already perished; never again will they have any share in all that happens under the sun.

Go, eat your bread with enjoyment and drink your wine with a merry heart, for God has long ago approved what you do. Let your garments always be white; do not let oil be lacking on your head. Enjoy life with the wife whom you love all the days of your vain life that are given you under the sun, because that is your portion in life and in your toil at which you toil under the sun.

Guillermo del Toro’s new film is not only one the best films he has directed, it also is a masterpiece of animation. His name before the title is not a sign of over-sized ego, but rather, an indication that he has taken Carlo Collodi’s 19th century story and, by setting it in the midst of Benito Mussolini’s Fascist Italy, produced a parable relevant to our own time when desperate souls are turning again to fascism. He and co-writer Patrick McHale have made our favorite little truth-averse puppet into a being who not only seeks to become human, but who develops into a moral being able to give up what he most desires for the sake of others. The tale is still a dark one, with the specters of Life and Death introduced into the story, but not a despairing or hopeless one. And in the touching father-son portion of the story Geppetto also grows—from self-absorbed grief into acceptance of his second son for his own qualities, rather than as a substitute for the son he lost.

Director Guillermo del Toro re-imagines the classic fantasy tale through the most beautifully-made stop-motion animation in years, a powerful and life-affirming father-and-son story about acceptance and love in the face of pain, misery, and fascism. The filmmaker’s love of monsters comes through again in what is easily his best film in a decade. The other adaptations, including the current one starring Tom Hanks, are more for children, but this darker version is for adults as well.

Stop motion specialist Mark Gustafson (animation director on The Fantastic Mr. Fox) serves as del Toro’s co-director. His team of over 40 animators bring to life the wooden (actually plastic and silicone made to look like wood) puppets. Their stop-motion animation owes a great deal to pioneer animator George Pal, but they have developed techniques that have gone far beyond the classic Puppatoons of the Forties so that the actions of the characters are more fluid and their clothing moves smoothly with their bodies. Most of the movie’s frames are so artistic that they could justifiably be displayed on the walls of a home or even a museum.

The story is narrated by the little insect who introduces himself as Sebastian J. Cricket (Ewan McGregor), who after a long series of careers intends to settle down in a pine tree and write his memoirs. Thus the little insect begins:

“I want to tell you a story. It’s a story you may think you know, but you don’t. Not really. You see, I, Sebastian J. Cricket, was there. As a matter of fact, I lived, actually lived, in the heart of the wooden boy.”

The cricket’s pine tree, we see in an extended flashback sequence, was planted by the grief-stricken village woodcarver Geppetto (David Bradley) to honor his deceased little son Carlo (Alfie Tempest). In another flashback we see how close the father and son were during the years of The Great War. Geppetto, earning a good living carving wooden toys, was engaged in carving a large crucifix hanging in the village church.

His son is often there with him. One dark night, returning from a bombing raid elsewhere, a squad of bombers release their excess bombs in order to lighten their load, and one of them lands on the church. Geppetto and the priest survive the blast, but Carlo is killed. Consumed by his sorrow, Geppetto buries his boy, planting a pine tree in Carlo’s honor. He stops carving, finding escape from his sorrow in the bottle.

For the next twenty years Geppetto spends his days drinking and bitterly expressing his sorrow. By the time Cricket takes up residence in the pine tree, Mussolini has come to power. Both the village Podesta (Mayor, voiced by Ron Perlman) and the Priest (Burn Gorman) show by their stiff-armed salutes that they have accepted the dictator’s hate-based ideology. One day while drunk, the rage-filled Geppetto chops down the tree. He plans to carve a substitute son from its wood, but before he can finish, passes out.

A blue Wood Sprite (Life, voiced by Tilda Swinton) gives life to the puppet and talks with Sebastian. She promises that if he will serve as the boy’s moral guide she will grant him one wish. He sees this as the means for getting his memoir published, so he agrees. Thus begins a series of adventures, similar to Collodi’s original tale, but shaped by the time in which Fascism had poisoned Italy.

As in the original tale, Pinocchio does disobey his father, and his nose does grow into a tree branch when he lies. He does become a member of a puppet troupe that travels about with a carnival. The latter is run by the evil Count Volpe ( Chris- toph Waltz), assisted by the goblin monkey Spazzatura (voiced by Cate Blanchett). Mussolini and his goons come to one of Pinocchio and Company’s performances, but the outcome is not what Count Volpe expects because Pinocchio leads the puppets in a parody of the dictator and his ways entitled “Big Baby II Duce March.”  (Their clever song and dance act reminded me of the wonderful Holocaust era film The Last Butterfly in which a mime imprisoned by the Nazis prepares a group of doomed Jewish children for the performance of a very unorthodox version of the opera Hansel and Gretel.) Also, as in the original version, there is a whale-like monster that swallows our heroes, and it is within the belly of the beast that Pinocchio, like Jonah in the Biblical tale, comes to himself. I love it when he uses the result of his lying as a means of escape for himself and his companions!

But instead of Collodi’s amusement park called Pleasure Island our little wooden friend and the Podesta’s son Candlewick (Finn Wolfhard) wind up in a Fascist youth camp where they are trained for warfare. Here there is a secondary father-son story in which the Podesta expects his son to become a fierce warrior. Instead, the boy and Pinocchio become friends and they turn a militaristic game into a win-win affair for all, the result being that the father becomes angry with his son. But then…

Unlike the other versions, Pinocchio never puts on clothing, his unfinished wooden body on display at all times. He also dies several times and, passing through a doorway, encountering Death (also played by Tilda Swinson) and learning that she is the sister of the woodsprite Life. Death explains that though the humans in his life will all die, he will live on as a wooden puppet when the sand moves through an hour glass. After several such encounters with Death, Pinocchio anxiously wants to return to help his friends in peril, but Death says that this time he can do so only as a human, meaning that he too will ultimately die and not have another chance at life. The puppet’s decision will reveal what a long distance he has traveled, from self-centered liar to other-centered rescuer.

This changed Pinocchio we see at the Fascist youth training camp where Pinocchio and Candlewick become friends. After the Podesta almost disowns his son, accusing him of being “weak” after he and Pinocchio had turned a competitive game into one of cooperation, the little puppet says to the down crest boy:

“You know, all fathers love their sons, but… sometimes fathers feel despair, like everyone else. And they say things they only think they mean in the moment. But with time, they learn they never really meant it at all. And they may even call you ugly things like a burden or a coward, but inside… they love you.”

These are almost exactly the words that Cricket had said to Pinocchio when Geppetto and his puppet had had a falling out. And later Geppetto, in accepting Pinocchio for himself rather than as a substitute for his dead son Carlo, will bear out the truth of the statement.

The spritely music greatly enhances the action.* Patrick McHale co-wrote nine songs with Roeban Katz and del Toro that are as cheerful and catchy as they are melancholic and profound. One of them, the parody mentioned earlier, “Big Baby II Duce March,” might delight young children while embarrassing their parents—it could be called “Mussolini’s Poop Song.” Altogether there are 41 musical segments , making this a tuneful film indeed.*

I can see a touch of Ecclesiastes in Death’s observation to Pinocchio about humans and life: “The one thing that makes life precious, you see, is how brief it is.” The movie subsequently bears this out in its bittersweet but satisfying ending. Also, del Toro might lead us into thinking about obedience and disobedience. The latter is stressed as  highly negative by Collodi, his story taking place in a culture and time when authority was respected and meant to be obeyed. But the new tale is set when the nation is ruled by a murderous tyrant and to obey him is to give in to hatred and the persecution of the weak. Might not disobedience then become a virtue, even though expressed through the childish song flung in the face of Mussolini?

The film is sure to make Visual Parable’s Top Ten Film List, inspiring us while also entertaining and instructing us.

*You can listen to the songs on YouTube here. Also you might want to read the interview Guillermo del Toro on Animation, War, and Song Lyrics in Pinocchio << Rotten Tomatoes – Movie and TV News.

The classic story is re-imagined as unfolding in Fascist Italy where the wooden puppet learns slowly what it is to be a human & a father to accept a son as he is.
Editor Rating ★★★★★5 out of 5
More Details