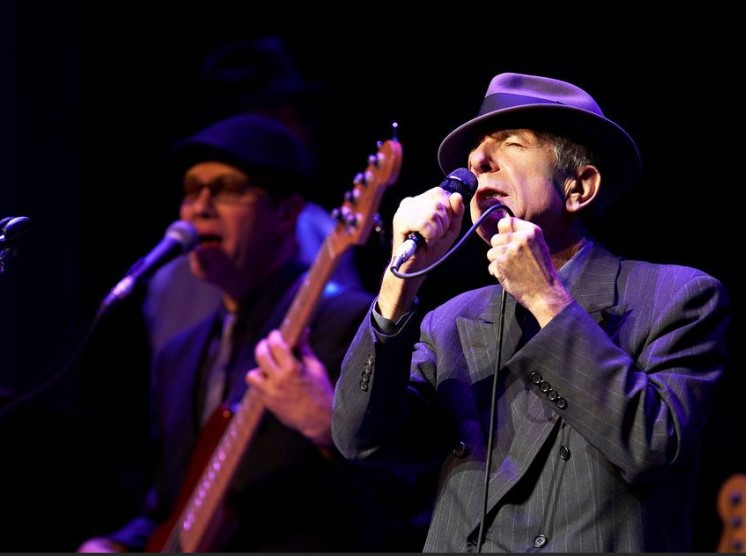 The gates of Jerusalem will sing hymns of joy, and all her houses will cry, ‘Hallelujah! Blessed be the God of Israel!’— and the blessed will bless the holy name forever and ever.”

Daniel Geller and Dayna Goldfine’s documentary approaches the life of the Canadian poet/songwriter through one song, a mystical one that has captured the hearts of millions of people, some of whom believe in some form of God, as well as many who do not. In my 40 years of film reviewing I know of only one film devoted almost entirely to one song, the 1990 PBS 90-minute documentary narrated by Bill Moyer, Amazing Grace. Both films appeal to lovers of beautiful music and to an interest in biographical facts about their creators. Crammed with archive footage of Cohen and other singers along with comments from a bevy of friends, this documentary is sure both to inspire and deepen the knowledge of fans of he song and its creator.

The first part of the film catches us up on the musical career of Cohen who rose to fame first as a Canadian poet. The great singer Judy Collins informs us that she was the one who persuaded Cohen to begin singing his compositions. Possessed with a far from lyrical voice, the poet’s sincerely style attracted many fans—as with Bob Dylan, they were enraptured by both lyrics and the singing. How surprising, in the light of the vast popularity of Hallelujah, that the1984 album with his version was rejected by the head of Columbia Records, so that it was singers Jeff Buckley and then John Cale who brought the film to a wide audience.  And even to a bigger audience when it was chosen as the last song on the soundtrack of the block buster animated film Shrek! We see too, through shots of the composer’s notebooks, that Cohen kept working on the song over the years until he had written some 150 verses. No wonder that the words of the large number of versions available on YouTube differ somewhat.

Cohen’s original version was at first seemingly mystical and religious, with its opening, “Now I’ve heard there was a secret chord that David played and it pleased the Lord” but then follows the question, “But you don’t really care for music, do you?” After the chorus he tells the story of David’s adultery (well, the first part, not its consequences of deception and murder) and then seems to be referring to a personal affair gone bad, its original cry of ecstasy (“Hallelujah”) replaced by a “broken Hallelujah.”

I write “seems” because the meaning of a Leonard Cohen song always seems to be as elusive as trying to hold mercury in your hand. The more the verses of this song you see/hear, the more elusive its meaning. According to the filmmakers, there are two versions, one more mystic, and the other, as sung by Jeff Buckley and then John Cale and a host of other singers (we hear from Glen Hansard, Brandi Carlile, Regina Spektor and Eric Church), more secular, that is sexual.

I appreciate that the film includes comments by producer-musician John Lissauer, who was inducted into the Grammy Hall of Fame for arranging and producing Cohen’s original version of the song. It is also good that Cohen’s rabbi Mordecai Finley testifies to Cohen’s Jewish roots. Cohen’s haunting song “Who By Fire,” based on the Rosh Hashanah and Yom Kippur liturgies, was new to me—indeed, this film makes me realize how few of this master’s songs I have heard all the way through. It’s also of interest that the film includes archive footage from Cohen’s six years spent at a Zen Buddhist monastery in California, reminding us how the master poet embraced and blended Eastern beliefs with Christian and Jewish ones.

A film I reviewed in the August 2019 issue of VP,  Marianne & Leonard: Words of Love, made me somewhat aware of the life of this poet/songwriter, but did not inspire me enough to listen to more of his oeuvre. You can bet that now I will, thanks to the enormous resources of the Internet. I’ll be reporting about this musical quest on my Visual Parables blog—in fact have already begun by revisiting “Anthem” and “If It Be Thy Will.” I think after seeing this fine film, which among its many clips includes a portion of the very last concert that he gave, you might also revisit his thought-provoking songs. What a master composer/writer he was, and what musical treasures he has left us!

Filled with admirers like Judy Collins, this doc. looks at the life of Leonard Cohen through his most popular song, the mystical/sensual HALLELUJAH.
Editor Rating ★★★★★5 out of 5
More Details