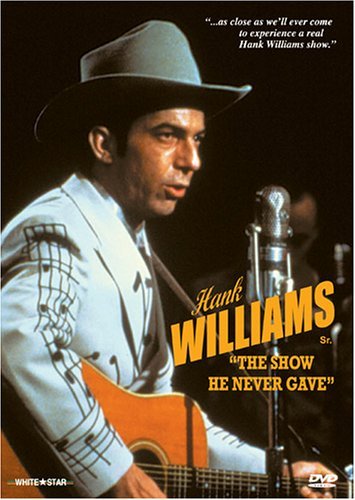 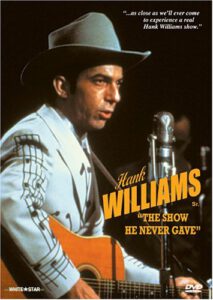 While going through a stack of used DVDs the other night I came across this film, recalling that it was the name Hank Williams that led me to buy it without knowing anything about it or its star with the interesting name of Sneezy Waters. Now that I have watched it, I regret waiting so long to do so, especially in light of Ken Burn’s great Country Music documentary a few months back. It is the kind of obscure movie that I love to share on Visual Parables, so here is my review.

Made for Canadian television, it first aired 31 December 1980, and also on HBO. Directed by David Acomba, the script was adapted by Maynard Collins from his own play. Singer/actor Sneezy Waters had toured playing Hank Williams from 1977 to 1990, and so it was to be expected that he would be chosen for the screen version. A great decision it was, Waters capturing the mannerisms and voice that made Williams so beloved by so many fans. Acomba’s film is not a biography, but more of a tribute to the incredible musical output (said to be 700 songs!) of this genius doomed to a premature death in the back seat of his new Cadillac. There are biographical details worked in when Hank talks between his renditions of his songs, but a viewer has to be somewhat familiar with Williams to fully appreciate them.

The film’s premise is that the very ill Hank Williams, scheduled to sing in Charleston, West Virginia, arranges to be driven because an ice storm in Nashville has grounded all airplanes. Along the way it becomes evident that he will not make it in time for the Charleston concert, so the driver is told to continue on to Canton Ohio for a New Years Eve performance. In the back-seat the gravely ill and heavily sedated by drugs and alcohol Hank is imagining the perfect concert. The singer says that he does not like the huge arenas holding thousands of fans, that his preference for a performance is a bar, like one of those they have passed that night. The camera then takes us to a family bar, alive with the chatter of patrons—young and old, singles and couples—and a small Country band is playing while a few of the bolder patrons dance lively in front of them.

Hank enters and is greeted warmly. He performs twenty-three of his classics, including “Lovesick Blues,” Half as Much,” “Your Cheatin’ Heart,” “Jambalaya,” “Tennessee Waltz,” “Cold Cold Heart” and many others. In between he talks about his life, his battles with alcohol, his loneliness, and his wives, especially his first one. He uses a medley of songs to describe his relationship to first wife Audrey Sheppard, beginning with “Hey, Good Looking” and in the dissolution phase “Your Cheating Heart.”

During the band’s break Williams mingles for a while in a back room with band members, then talks with the attractive waitress. Back on the bandstand he sings more songs. His in between musings turn more serious as he talks about God. His love for Gospel music emerges as he sings his “I Saw the Light,” this turning the bar into a gospel tabernacle with the audience joining in the singing and responding to his commentary, one woman frequently shouting “Hallelujah.” Some of the men mock the proceedings at first, but as Hank and the audience, singing along with him, continues, their resistance melts away. The singer quotes a psalm with its plea to God, “Cast me not away.” Even the religion-inspired woman calling out “Hallelujah” falls silent as Hank launches into his recitative in which he pleads for us not to judge “Men with Broken Hearts.” However, Williams’ fans will notice that Sneezy’s version of the song ends on a more pessimistic note than Hank’s, “and even sleep brings no relief to these men who curse their births/they have no dreams of happiness left in heaven or on earth/for how can men have faith in God when faith in fellow man departs”.*

By the end of “Men with Broken Hearts” the room is as silent and as somber as a tomb. The film ends with the scene in the back seat of the car where the young driver discovers that Hank has passed away sometime during the night. Although the occasion is a tragic one, the film for most of its length is a toe-tapping joyful tribute to the man many regard as the greatest Country singer/composer of all time, and many of them regard as the greatest singer ever.

Hank Williams is probably the most influential, with dozens of subsequent singers paying tribute to him as one of their inspirations—and this includes Bob Dylan and many rock stars also. Across the sea in Ireland Bap Kennedy, known for his Celtic music, assembled a band for his album “Hill Billy Shakespeare” that covered 11 of Williams’ classic songs! (And Ken Burns uses the phrase “Hill Billy Shakespeare” in the 3rd episode of his Country Music when he describes Hank Williams’ priceless contribution to the genre.)

If you enjoy and have a copy of the 2016 film I Saw the Light, you will want a copy of this older film**, or at least to watch it streaming on Amazon Prime Video. The picture quality is not good, but as many appreciative fans have written on IMDB, this less than desirable quality actually gives the film a documentary look: it certainly does not spoil the enjoyment of the film!

Director David Acomba and screenwriter Maynard Collins see more taking place in the backseat of that Cadillac than a man’s dying. They see it as occasion for celebrating a man, though often wracked with pain, who nonetheless left us with a rich legacy probing the joys and the heartaches of life. This film is one more reason to be grateful to our Canadian neighbors.

*You can see Hank’s original words at: https://www.azlyrics.com/lyrics/hankwilliams/menwithbrokenhearts.html

** Search on Amazon DVDs, and you will find many offers of the DVD, including one like my copy which includes another feature film. Prices range from $1.99 on up through $6.99 to the crazy $49.87.

This is not a biography but a "perfect concert" that Hank Williams, on the night of his death in the back seat of his Cadillac, imagines he will give in a bar rather than the huge hall in Canton Ohio.
Editor Rating ★★★★★5 out of 5
More Details