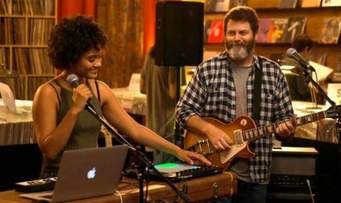 I wrote this review in 2017 but somehow lost sight of it during the rush to complete the August issue. Because its young star Kiersey Clemons plays the central character in Sweetheart, I searched for and found the review in my 2017 notes. The film is still worth watching, providing ample evidence of Ms. Clemons versatility as an actress—she sings, as well as acts in this father-daughter comedy. Better late than never.

Director Brett Haley’s new film is a father-daughter film, but ever so different from Leave No Trace. Frank (Nick Offerman) and Sam (Kiersey Clemons), residing in Brooklyn’s Red Hook neighborhood, would not know how to live off the land, as did the father and daughter in Haley’s earlier film. After 17 years of selling vinyl records Sam is ready to give up the failing business. But he is not yet ready to give up his daughter, who is looking forward to leaving for the West coast at the end of summer to attend medical school. And yet he has no problem with Sam’s summer romance with aspiring artist Rose (Sasha Lane).

Not completely done with grieving over the death of his wife in a bicycle accident some time ago, Frank often must tend to his mother’s needs. Marianne (played by Blythe Danner), afflicted with dementia, has become a shoplifter. The other woman in his life is landlord Leslie (Toni Collette), saddened that Frank will be closing the shop, and sort of available romantically, until a former boyfriend shows up.

Once a member of a band, Frank talks a reluctant Sam into jamming with him, and they create a very listenable song. When he calls their ensemble “No Band” and impulsively sends their recording in to Spotify and it is well received, Sam does not share in his joy. She is upset that he did not secure her okay, and she definitely is not open to the suggestion of a would-be record distributor that they come up with other songs and go on a small promotion tour. She does not want anything to get in the way of her studies at UCLA’s medical school.

This is another film wherein the child evinces more maturity than a parent. The two stars work well together, belting out their songs with gusto. As a tale of a father who never quite realized his own dream and would like to put off the moment when he must let go of his only child, this will touch your heart, maybe even causing it to live up to the title.

Record store owner Frank pleads with his college-bound daughter Sam to join him in singing his new song, but she at first wants nothing to do with it.
More Details