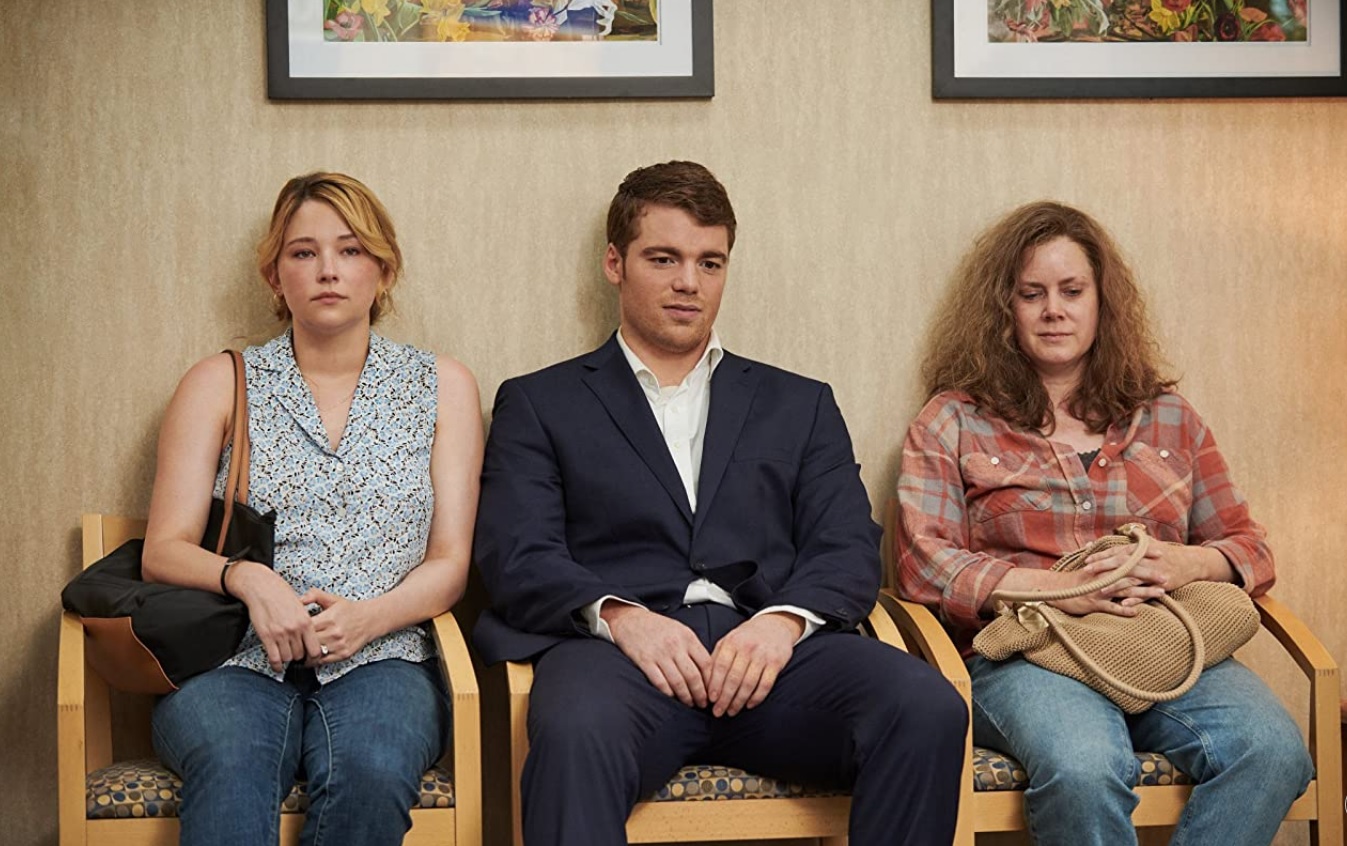 Those who trouble their households will inherit wind...


Better is a dry morsel with quiet than a house full of feasting with strife.

The strife decried by the authors of Proverbs is at the center of director Ron Howard and screenwriter Vanessa Taylor’s adaptation of J.D. Vance’s memoir Hillbilly Elegy. Do not be put off by the low scores given by the Metacritic’s on IMDB’s website. The film is flawed but not as badly as the critics would have us believe. If for no other reason, you should tune in to Netflix because of the Oscar talk that is already building up around Glenn Close’s portrayal of Vance’s stern but warm-hearted grandmother, whom everyone calls Mamaw.

The film’s timeline switches back and forth in the life of an Appalachian family’s youngest member, known as J.D. In one sequence he is a high schooler tossed and turned about by the turbulent behavior of his drug addicted mother and her various love affairs and marriages. In the sequence taking place in the present (the 90s), he is near the end of his studies at Yale Law School and going through interviews with prestigious law firm reps to win a paid summer internship that will allow him to complete his education. A crisis develops when his sister calls urging him to return to Middletown because their mother has overdosed on heroin and been admitted to a hospital. They have just a few hours to find a rehab facility before she is forced to leave the safety of the hospital.

J.D. is poised to escape the poverty that has plagued his extended family, both those still living back in eastern Kentucky and his immediate family that has migrated to Middletown, Ohio. Dominated by a giant steel company, Middletown once was prosperous when the Vance family had left the hills, along with thousands of others seeking the better life. Sadly, with the decline of American steel production, the town has fallen onto hard times. The teenage J.D.  is played by Owen Asztalos, and the law school student by Gabriel Basso, well chosen because they are so alike in looks.

Early in the film the Vance family, as was customary, is spending their summer at the family homestead in the hills of eastern Kentucky. The mother Bev (Amy Adams) is urging her brood to pack up so they can return home. Over a series of shots we hear a radio preacher preaching about faith and the need to hold onto it, a good summary of the simple gospel the people of this story cling to but have such a difficult time living out. It is hard for the viewer to understand why J.D. does not want to leave the “holler” because the one summer experience we are shown is of some local teens bullying him at the swimming hole. The near drowning boy is saved by some older Vance males who beat up the one attacker they manage to catch. This rescue is a harbinger of things to come for the boy.

J.D.’s volatile mom, Bev (Amy Adams) was still a nurse at a Middletown hospital where she cheerfully serves the patients. She steals some of their pills so she can either control her pain or achieve a drug-induced high. During one of her highs she laces on a pair of roller skates owned by a fellow nurse and skates merrily down the hospital’s hallway and into the Intensive Care unit. Out of a job and desperate for a chemical fix, she “troubles” her household and “inherit(s) wind.” She marries a ne-er do well boyfriend as mixed up as she is. Thus J.D.’s home life is chaotic, almost guaranteeing that he will repeat her mistakes.

The anchors for the teenage J.D. are his older sister Lindsay (Haley Bennett) and even more, his grandmother “MaMaw” (Glenn Close), a foul-mouthed woman continually dangling a cigarette from her mouth but  possessing a loving heart. Separated from her abusive husband “Pawpaw (Bo Hopkins), MaMaw says of him, “He let things get to him, make him feel small.” The same could be said of J.D.’s mother, who always says, after recovering from one of her bouts with drugs, that she is sorry and will do better. Of course, she doesn’t. Finally, during J.D.’s teen years MaMaw steps in to remove the boy from his mother’s custody, giving him an ultimatum, “But you, you got to decide you want to be somebody or not!”

Heeding his grandmother, as well as that of a concerned teacher warning him of possible failure, J.D. moves in with MaMaw. He apparently gets his act together, because he wins admission to the exclusive Yale School of Law. However, during his senior year at Yale when he is undergoing interviews with reps from prestigious law firms for a summer internship that will afford enough funds for him to finish his education, Lindsay calls him because Bev has gone on a drug binge again, overdosing on heroin. Rushing back to Middletown, he is faced with a second wrenching decision—stay to support his helpless mother or return to Yale to ensure that he can keep an important appointment the next day. If he can persuade the lawyer to hire him for the summer, he will be able to finish his education and earn his ticket out of the poverty plaguing his family.

The film boasts excellent performances by the cast, especially Glenn Close, whose superb acting is matched by the unglamorous make-up that enables her to assume the physical appearance of the real MaMaw. Amy Adams captures the desperation and anguish of Bev, though the script provides few details of the demons driving her—just an allusion by MaMaw that her daughter’s problem did not start with her, an oblique reference that she too had been abused by Pawpaw at some early time.

The script leaves out many details from the book concerning Appalachian culture, though it does include some instances—such as the reiterated statement that family is paramount to hill people and a couple of incidents illustrating class division. In one a lawyer attending the interview dinner with J.D. at Yale responds to the student’s revelation about his humble ancestry with a remark that includes “red neck,” and J.D. stops the interchange by soberly retorting, “We don’t use that word.” The other incident is a bit hokey, making me wonder if it was contrived—J.D. is so puzzled by the elaborate tableware and choice of wines at his interview dinner that he excuses himself from the table and in the hallway dials his girlfriend Usha (Freida Pinto) for a quick explanation on wine and the use of the proper forks. (Usha, of Asian-Indian descent, is so appealing and supportive that I wish more of their romance had been shown.)

I think it is the excision of the details of how J.D. was able to turn around his high school performance, plus the showing of just one of the family’s returns each summer to their ancestral home in eastern Kentucky, that contributes to the failure of the film to satisfy critics. Deep attachment to their beloved hills and relaxed way of life has always been at the heart of Appalachian culture—John Denver certainly captured this in his stirring song about West Virginia, “Country Roads.” Because we never see any of the other summer pilgrimages in the film, there is little notice given of the unease that Appalachians feel when moving away in search of jobs.* Other than occasional glimpses of the sprawling Armco Steel plant in Middletown, there is no mention of how it was the draw for Appalachians eager to obtain one of its well-paying jobs. (I served a small church a couple of miles from the huge plant in Middletown, and most of the retired men had been employed there.)

One feature of Appalachian culture, poverty, is dealt with too sketchily, though the way in which J.D. is torn between the value of family (his mother) and his hoped-for career, is well emphasized. Just as a youth he had to choose his own welfare and forsake his mother and live with his grandmother, so while at the gateway of career success, he has to turn away from her. The morality of this latter choice might be debatable, though as an example of a pull-yourself-up-by-your-own-bootstraps, J.D.’s choice is inevitable—which means that the future lawyer must leave his Appalachian roots behind in order to enter the dominant middle and upper class culture.

Critics of the book point out that its author generalizes too much from his own experience in order to justify his conservative message—once a Democrat, he is now a Republican. They’ve also charged that he overlooks the racism that has led so many white working-class voters to switch from their traditional Democratic roots to the new Republican Party. The film seems to counter that somewhat by pointing out that J.D.’s girlfriend at Yale is of Indian descent. As I recall, it is his mother Bev who seems to accept her, paying her a compliment about her beauty. Anyway, critics of the film seem to be very divided, some liberals even denouncing it, and conservatives supporting it. Some, like myself, feel ambivalent about it.

As I reflect further, I realize ever more fully that it is the two women, and not J.D., who dominate the story, even though he is the one telling it. He says in voice over, “Twice I needed to be rescued.” Notice that he speaks in the passive voice. He is indeed the passive one—until that last scene in the motel to which he has brought his addicted mother. She has refused his frantic, strenuous effort to enroll her at a drug rehab center, so he tells Bev that he cannot stay with her any longer. He barely has time to make the all-night drive back to New Haven for his future-changing interview. Walking away from her, he passes his sister Lindsay in the parking lot. From now on if he is to achieve the American Dream, he must leave his heritage, which includes his family, behind. His mother and sister are on their own. A costly choice, no doubt.

* Years ago, a TV documentary, the name of which I cannot recall, emphasized the fact that many programs designed to help Appalachians failed because so many were so homesick that they gave up and returned to the hills.

This review will be in the December issue of  VP along with a set of questions for reflection and/or discussion. If you have found reviews on this site helpful, please consider purchasing a subscription or individual issue in The Store.

The turbulent early life of a "hillbilly" boy whose drug-addicted mother almost caused him to miss his Yale law degree.
More Details