Skip to content
(Note: this is my 3rd blog on the series: scroll down to see the one on Week One. It includes some references to other films that might interest you). 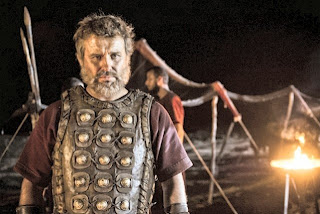 Moses has appointed Joshua to be the new leader of Israel.

Well, now we have had four hours of History Channel’s The Bible, which might better be called Fight Highlights of the Bible. The second week’s events took up where the first week left off. Moses has died within sight of the Promised Land, but leadership of Israel has been passed on to Joshua, who has sent two spies to reconnoiter Jericho. This is the strategic city that stands between them and the Promised Land. When the spies are discovered, there is a chase and a fight in the narrow city streets. The writers seem to want to pack as much swordplay as possible into this series, presumably because they think that’s what the public wants. Maybe they are right—last week’s episode reportedly drew over 13 million viewers, surpassing all three network program offerings. (14 million according to the History Channel.) We’ll see about tonight’s episodes, which again are of very mixed quality.

The good news is that we have left behind Genesis with its mixture of myth, legend, and tradition-bound history, so the producers’ literalistic approach to the Bible is not as much an issue (at least for this viewer). The bad news is that in picking which of the multitude of The Bible’s stories to include, they left out the stories of two strong women—Ruth, the Moabite ancestress of King David, and Deborah, one of the judges of early Israel. At least they included with the guys Rahab the Harlot in the story of the spies in Jericho, but the role of the film Rahab is less heroic than the original in the Book of Joshua. Rather than volunteering to help hide the spies, she is forced at sword-point to help, and she does not provide or let down the rope by which the pair escapes over the walls. They climb down using the same rope and scaling hook by which they entered the city. This rewriting of the biblical story seems strange to me, given that producers Roma Downey (of “Touched by an Angel” fame) and Mark Burnett “(Survivor” and “The Amazing Race”) are biblical literalists.  As we’ll see they take liberties with the other stories as well. By this I do not mean leaving out details for the sake of condensing, but of changing the details of a story.

It is understandable, given the series’ emphasis upon violence (weren’t the Ninja Angels in the story of Lot and Sodom hilarious last week?), that the one story included from the Book of Judges would be that of Sampson. And the color blind casting of black actors Nonso Anozie as Samson and Sharon Duncan Brewster as his mother is almost as intriguing as the story itself. The huge brawny actor looks like he could be a World Wrestling Entertainment star. With his slaying of so many Philistines before Delilah tricks him into revealing the source of his strength, and his bringing the temple down on himself and his taunting enemies (Delilah is shown in the doomed crowd), adventure fans are well served. But is the Bible well served? What kind of image of God and of the Book regarded by believers as his word does this and the other episodes leave with the viewer unacquainted with the Bible? 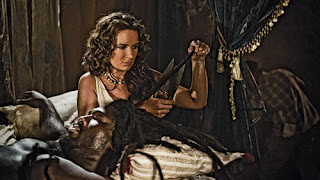 In the episode with Samuel the people plead for a king despite the prophet’s warning that a king would become a tyrant. His reluctant choice of Saul proves disappointing, as we see when the king is about to enter into battle but Samuel has not come yet to offer the necessary sacrifice to God beforehand. Saul goes ahead himself and sacrifices the lamb. Samuel is very upset with the king assuming his priestly role. Then when Saul disobeys Samuel’s order to destroy the entire enemy, including women, children, and livestock, the prophet kills the captured king (though not by decapitation as in the Bible) and disowns Saul, telling the king that he will anoint someone else. The film glosses over somewhat the brutality of the Israelites’ holy war and what the Bible calls “the ban,” meaning total annihilation of the enemy. Scholars have long debated the ethics of this, especially in that the author(s) of the two books of Samuel claim that this order comes from God. More on this in a later blog when I want us all to think about violence and the Bible. 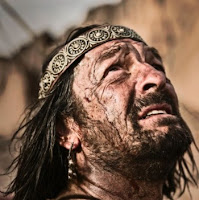 The portrayal of King Saul, both in the script and by actor Francis Magee, was the strongest factor in this second part of the series. He is shown as a man in over his head, tragically worried that young David will supplant his own son Jonathan on the throne. With a few more scenes inserted this section could have been even more moving, the tension between Jonathan and his father caused by his strong friendship with David could have been more developed, adding to the tragedy. For example, when David receives word of the death of the king and his son there is little of the lamenting over them that takes up all of Chapter One of 2nd Samuel—just David’s comment, “How the mighty have fallen.” Also, backing up a little, the depiction of Samuel’s choosing David to supplant Saul is disappointing, the prophet simply coming upon David after he has killed a wolf with his sling, and anointing him almost straightway. The biblical story of Samuel going to Jesse’s house and examining all of David’s brothers while the overlooked (by Jesse) youngster is out watching the sheep is such a delightful one, in keeping with the biblical tradition that God usually chooses what is considered the lesser person to carry out his missions.

Even more disappointing is the way in which the prophet Nathan is portrayed, minus the passion and artistry of the angry prophet chronicled in the original story. Although Hollywood made a muddle of the story in David and Bathsheba (trying to justify the adultery on the basis of “true love”), I still recall so many decades after seeing the 1951 film Raymond Massey’s portrayal of Nathan. Equally disappointing is Nathan’s direct approach in his accusation of the king. The prophet’s clever use of the story about a poor man whose lamb is stolen by the rich neighbor, thus “capturing the conscience of the king,” is left out entirely–just a declaration of guilt and the curse upon the illegitimate child the guilty pair has produced.

The episode ends with David and his new son Solomon playing with a model of the temple that David has been forbidden to build, leaving “the rest of the story” to be completed this coming Sunday. The 3rd Week will bring us to the midpoint of the series, with the story of Jesus and the Book of Revelation yet to come. This makes me wonder what the producers have decided about the huge section of the Bible after Kings David and Solomon, which includes the great prophetic writings. Out of the background of the violence of holy war and the ban arises Jeremiah and the exile of Israel, and the even grander book of Isaiah with his concept of shalom and the nonviolent Suffering Servant, the latter shaping Jesus’ understanding of his mission. Thus it is still too early to judge the success or failure of this ambitious attempt to portray the Bible on film, but I suspect that the verdict will not be favorable, given what we have seen thus far. Still, I hope for continued success for the series because at least it has even the secular media taking notice, which reminds me of the old Hollywood dictum that even bad publicity is preferable to no publicity.