Skip to content
This week’s observance of the 50th anniversary of Dr. Martin Luther King Jr’s great speech climaxing the March on Washington brought back many memories. 1963 was the year I graduated from McCormick Theological Seminary and accepted my first call to serve a three-church parish in North Dakota. When I heard that summer of the plans for the great civil rights gathering in the nation’s capital, I wanted badly to join the throng. I had long admired Dr. King and had heard him speak in person (more on that in a moment). I was certain that his speech would be the highlight of the event. But Washington was a long way off, My wife and I had little spare money, and, most important, I was just beginning my pastorate and had no time off coming. So, like many other Americans, I listened and watched as much of the proceedings as possible on TV. 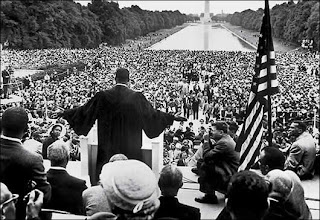 A little over four years earlier it was Dr. King who in a way almost got me fired from my first church job. While a college student at Butler University I was hired by an inner city Presbyterian church to help start and lead an after school program for children and youth, even though I was a Methodist. The church’s pastor and the church session (governing board for you non-Presbyterians) had a vision for using their building as a means of serving young people who had no place to go except the unsupervised streets for recreation after school. I was a serious reader since my childhood, in high school having been introduced to Gandhi and his writings, so when the Montgomery Bus Boycott was successful, leading to the publication of Dr. King’s book Stride Toward Freedom, I eagerly bought and read it.

Thrilled by the book, I longed to be engaged in some meaningful resistance to racial segregation. That opportunity came sooner than expected when a call was sent out (I think by the N.A.A.C.P.) for “people of good will” to walk a picket line at the Galyans Supermarket on the west side of Indianapolis. Galyans was a local chain with grocery stores in all sections of Indianapolis. This particular Galyans was located in an “all-Negro” area, but its management had refused to hire any blacks as cashiers or clerks, other than for menial jobs of sweeping and carrying out the garbage. The picket line was part of a boycott—the message being, if you won’t hire blacks, then we will not buy your groceries. So, filled with a romantic view of fighting for the right, I drove over to the store on the day of the event.
Walking that line with a sign demanding equal employment in my hands was perhaps the scariest thing I had done up till then, my romantic feelings quickly giving way to fear. None of my friends went. I had not told my mother and step dad, with whom I was still living while going to college.  So, walking back and forth with mostly black strangers, I felt alone and vulnerable. People, most of them also black, came and went. The press took pictures. And then I heard a loud thumping on the store window. It took me a moment to realize that the person doing the thumping was trying to get my attention. His face, contorted by anger, looked familiar. Suddenly I realized it was D. J. He belonged to the church where I worked as youth director. His pleasant tenor voice was an important part of the choir, to which I also belonged. We had exchanged pleasantries many times at choir practice and on Sunday mornings. He gestured toward the door, so I walked over to it where he met me. How dare I do such a thing as picket his store, he declared, among many other things. Turns out he was the assistant manager of the store. He promised to call the minister and the members of session. Either he or I would soon be leaving the church!
D.J. kept his promise, and the pastor called the session to meet with me—and also representatives from the Presbytery, the governing body for all Presbyterian churches in Indianapolis. This was the late Fifties, a couple of years before the national leaders of the Presbyterian church (led by Eugene Carson Blake) began to take part in demonstrations demanding the integration of facilities, so none of my interrogators had any precedent for dealing with my participation in the protest at Galyans. I had been very close to the minister—indeed, he had convinced me to leave the Methodist Church and become a Presbyterian—but he was largely silent during the meeting, though it did become obvious that he did not accept D. J.’s demand that I be fired.
The head of the Presbytery assumed leadership of the meeting, asking why I would do such a thing? His tone implied that walking a picket line with a protest sign in the “Negro side of town” was not the sort of thing a good Presbyterian should do. I replied that I was an admirer of Dr. King and the freedom movement he was leading, that it was wrong for a store to sell to blacks but refuse to hire them, and that I could not in good conscience teach and lead the youth of the church if I had refused the invitation to picket. I would have felt like a hypocrite.
There was more said, but I recall little of it, something like a haze descending on me as I sat in the hot seat, and never a word of encouragement issuing from these local leaders of my denomination whom I considered my mentors. I wish I could say now that challenging, prophetic words shot forth from my mouth—later I thought that I should have said, “Why weren’t you there if you really believe in equality and justice?”–or that I turned down their offer that if I would not go back the next day to the demonstration, there would be no further repercussions—but I didn’t. I stayed, and D.J. left the church. I had gone through a mild form of what the New Testament calls a baptism or trial by fire but had not been very heroic.

Just a few months later Dr. King came to Indianapolis and spoke to a large crowd at the old Cadle Tabernacle where for several generations preachers had proclaimed a very different message than the black leader’s social justice brand of the gospel. My then fiancé Sandra was with me, both of us inspired by his message, and privileged to go up and meet him at the end of the event. I have wondered if I had heard him in person first before my meager attempt to follow his teachings of resistance to injustice, I might have felt and acted more bravely. A few years after this, in August of 1964, I had an opportunity to find out, answering, with my wife’s agreement and support, the call to travel south with a colleague to participate in the Mississippi Freedom Project, an ambitious attack on Jim Crow in the nation’s “most segregated state.” But that, as they say, is another story.

One Reply to “How Dr. King Almost Got Me Fired”