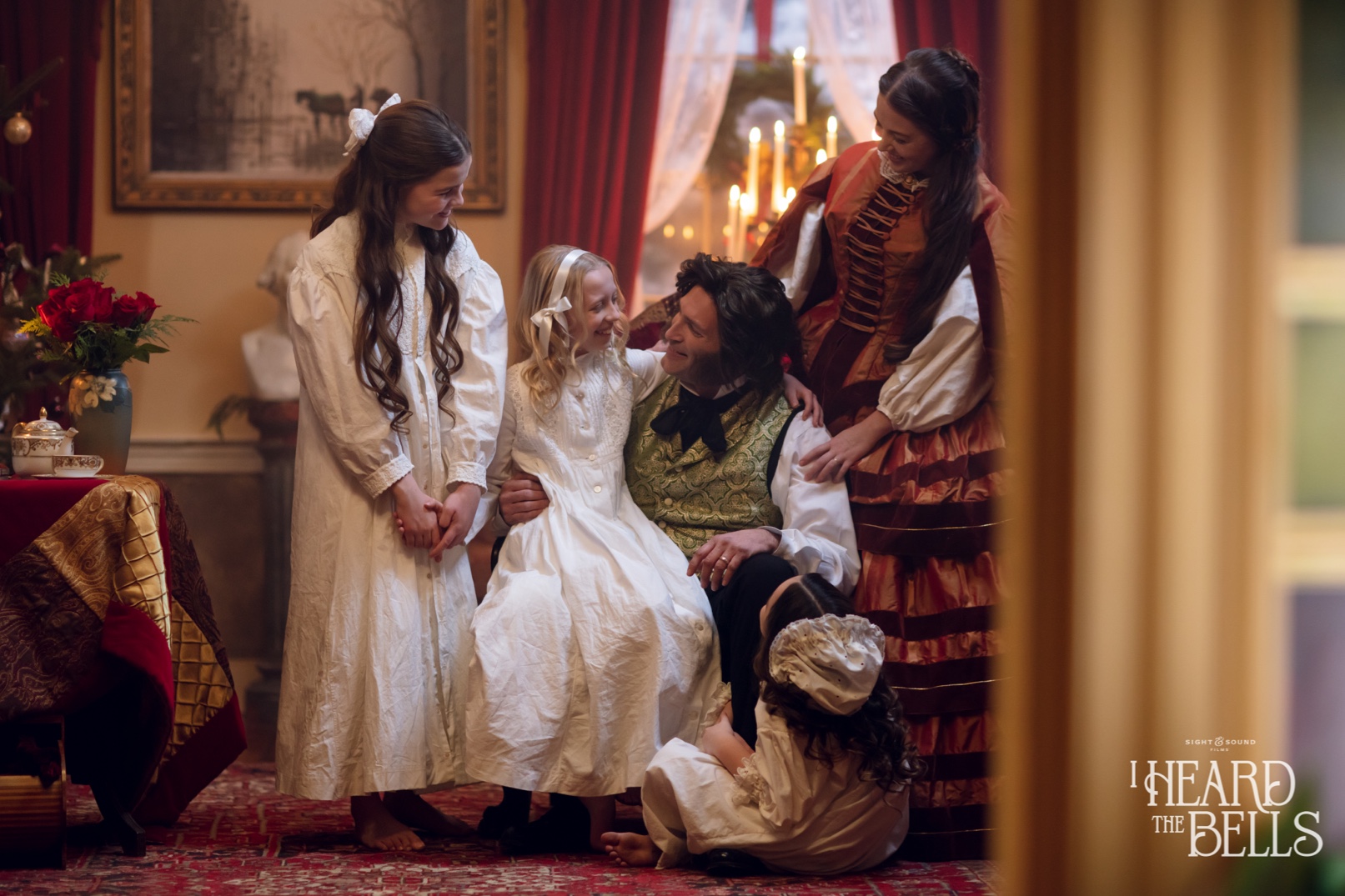 He shall judge between the nations
and shall arbitrate for many peoples;
they shall beat their swords into plowshares
and their spears into pruning hooks;
nation shall not lift up sword against nation;
neither shall they learn war any more.


Blessed are those who mourn, for they will be comforted.

Writer/director Josh Enck’s “story behind the song” film ought to join It’s a Wonderful Life as a Christmas classic. You will find few, if any, films as inspiring as this tale of how Henry Wadsworth Longfellow came to write the beloved Christmas carol “I Heard the Christmas Bells Sing,” because it is set in a time even darker than our own.

It is the early 1860s and Longfellow is deeply in love with his second wife Frances, better known to him as Fanny (Rachel Day Hughes). They and their five surviving children live comfortably in a Cambridge Massachusetts house that had served as George Washington’s headquarters during the Revolutionary War. Longfellow, the most popular poet of his day, is to be wined and dined at a dinner where his best friend, Sen. Charles Sumner, is among the guests. He does not want to go, but Fanny gently coaxes him to get ready. The dinner guests are Abolitionists, and so the host praises the poet for his little volume of anti-slavery poems Poems on Slavery which had been widely distributed by a leading anti-slavery society

This idyllic segment centered on the family comes to an end when Longfellow stretches out in a chair for an afternoon nap. Fanny has artistic talents, so she draws a quick sketch of her somnolent husband. Going to the next room to place a lock of her daughter’s hair into an envelope, her dress is set afire by one of the candles. Panicked, she cries out. Her husband sleeps on for a moment, but is finally aroused by her screams and rushes in to attempt to dowse the flames. It takes several minutes to extinguish the fire, during which he is severely burned himself. Fanny dies the next day, and Longfellow is so severely burnt on his hands and his face that he cannot attend the funeral held downstairs. Afterwards, his pastor comes upstairs to offer his condolences. One of the things I appreciate about this scene is that he does not try to explain the good woman’s untimely death with one of those silly, unseemly “reasons” for undeserved calamity. He is clearly too wise to attempt to solve the mystery of life and death.

There is no consoling Longfellow over the loss of what the film made clear earlier on was his soulmate. Sorrow consumes him so that he vows to stop writing poetry—and this was why he had given up an honored professorship at Harvard, to pursue full time his passion for writing. Fanny’s death, of course, affects the whole family, Charley in particular, who claims amidst his grief that God is dead. As time passes and the Civil War grows in scope, Charley also is at odds with his father because he wants to enlist in the Union Army. He feels left out as he watches a parade of blue-uniformed young men march through town. However, he is just below the age of consent, and his father is not about to risk losing another loved one. 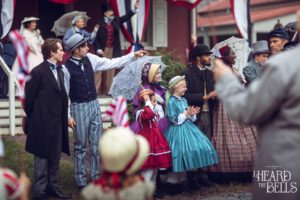 Father and son argue vehemently, disrupting the family harmony. Charley at last mounts his horse one rainy night and sets forth to enlist despite his father’s objections. The son shouts that he now believes what both of them must believe, that God is dead or uncaring. Longfellow’s heart breaks again, so he uses his influence with Senator Sumner and others to pull strings with the Army and get Charley promoted so that he can serve on a general’s staff, safe from the front lines. Charley, of course, is not pleased with this, but matters take their course, and despite being ordered to join a general’s staff, he is seriously wounded at the Battle of Mine Run. Taken into a damaged Confederate Church, the bell of which had fallen to the floor, Charley loses and regains consciousness. In a moment of lucidity and inspiration his eyes focus on the bell’s inscription, the word “HOPE” leaping out at him. This initiates a stream of events, in which Charley is reunited with his father, tin turn leading Longfellow, early on Christmas Day of 1863, to write the seven-stanza poem that years later was turned into a four-verse hymn or carol, “I Heard the Bells on Christmas Day.”

Two of the stanzas refer to the on-going Civil War—”Then from each black, accursed mouth/The cannon thundered in the South…”—and the sixth perfectly describes the poet’s state of mind following the death of Fanny:

What a thrill and inspiration when Longfellow, quill pen moving quickly across the paper, writes the last stanza, with its note of faith triumphant over death and despair. I have not seen any other account attributing credit to Charley for regaining his faith in that church and then influencing his father to return to faith. Whether historical or not, it certainly enriches the story.

Produced by a theatrical company called Sight & Sound Theatre, this is a beautifully mounted period film, filmed in glowing color by cinemaphotographer Steve Buckwalter. S&S is well known to many Christians who visit Brandon Missouri or Lancaster Pennsylvania where they stage Bible-based plays. This is Sight & Sound’s first venture into feature film making, and I trust it will not be their last—though the fact that there has been no advertising of the film in the Cincinnati/Dayton area reveal they have no budget for the usual kind of ad campaign for a film. Clearly they have poured all their funds into the sumptuous costumes and set, as well as attracting an excellent cast. Stephen Atherholt exudes both the passionate love for his life and the paralyzing grief caused by her terrible death. Rachel Day Hughes is so good as the strong-willed (not shown in the film, she had held off the courting poet for seven years before accepting his proposals) and devoted wife that her death comes far too early in the film—though, of course, this film is the biography of a song, not of a man.

Long-time readers of VP will know that I have an almost allergic aversion to so-called faith-based film because of their preachiness—but not this one. Faith there is aplenty in the hearts of the characters, but no attempt to snag the souls of viewers, just a good story of adversity, sorrow, faith lost for a while to despair, and then recovered. Few films this year have sent me out of the theater feeling so uplifted.

The inspiring story of how Henry Wadsworth Longfellow rose from tragedy to write the carol "I Heard the Bells on Christmas Day" during the dark days of the Civil War.
Editor Rating ★★★★★5 out of 5
More Details