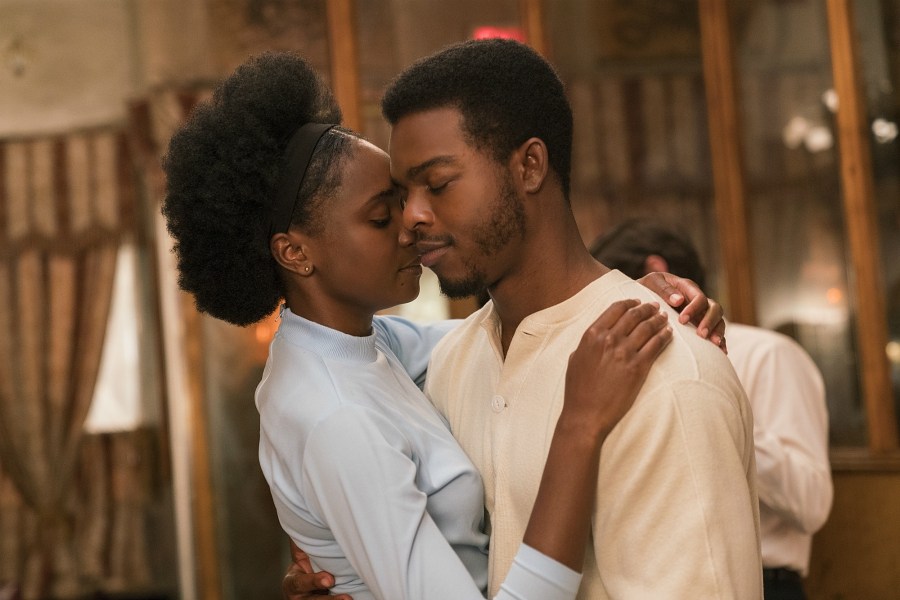 
If you see in a province the oppression of the poor and the violation of justice and right, do not be amazed at the matter…


For we wrestle not against flesh and blood, but against principalities, against powers, against the rulers of the darkness of this world, against spiritual wickedness in high places.

Based on James Baldwin’s acclaimed 1974 novel of the same name, Barry Jenkins’ film is a paean to love set in a society permeated by ugly prejudice and injustice. In the opening shot we see Tish Rivers (Kiki Layne) and Alonzo “Fonny” Hunt (Stephan James) strolling down the walk of a Manhattan park at the edge of the Hudson River. They hold hands. As they pause to kiss, the camera comes in for a close-up. “You ready for this?” she asks. “I’ve never been more ready for anything my whole life,” he answers.

But actually neither are ready for the terrible weight of a racist society that is about to descend upon them.

The scene switches to Tish visiting her lover in jail, with their story told by her voice-over and a series of flashbacks between the present and the past. Fonny, an aspiring sculptor, is wrongfully jailed for the rape of a Puerto Rican woman who is manipulated by racist white cop Officer Bell (Ed Skrein) with a grudge against the black man. Even though Fonny has a solid alibi, and it should be plain that he could not possibly have crossed Manhattan within the time frame of the crime, the prosecutor insists on taking the easy route and prosecuting the man in custody rather than looking for the real perpetrator.

We see the lovers having sex and seeking for a loft to live in. Their search is fruitless because of their race, until a kind-hearted Jewish owner agrees to rent to them. During one of her jail visits Tish reveals that she is pregnant, her anxiety relieved when Fonny reacts in gladness. At home she is equally anxious when she tells her mother Sharon (Regina King) about the coming baby. The older woman is shocked but accepting. So is her father Joseph (Colman Domingo), and her older sister, Ernestine (Teyonah Parris). They invite Fonny’s family over to share the good news–his ultra-pious mother Mrs. Hunt (Aunjanue Ellis), her jovial husband Frank (Michael Beach), and their two daughters. Mrs. Hunt is extremely upset because all along she has believed that her son was too good for the less educated Tish. She curses Tish, exclaiming that the baby was born in sin and therefore will shrivel up. Her husband Frank, glad for the news, is so upset that he hits his wife so hard that she falls down. Sharon quickly takes charge, sending off Joseph and Frank to go out and drink together, while she gives Mrs. Hunt a piece of her mind as she kicks her and her daughters out of the apartment.

The troubling but tender love story is juxtaposed with the cruel reality of society’s white racism, becoming a major example of what author James Baldwin asserted in his numerous non-fiction writings (his strong warning to America in The Fire Next Time was an important influence in my early ministry). In Raul Peck’s marvelous documentary I Am Not Your Negro, based on an uncompleted project of Baldwin’s, the author declares:

“There are days—and this is one of them—when you wonder what your role is in this country and what our future is in it. How precisely are you going to reconcile yourself to your situation here and how you are going to communicate to the vast, heedless, unthinking, cruel white majority that you are here. I’m terrified at the moral apathy, the death of the heart, which is happening in my country. These people have deluded themselves for so long that they really don’t think I am human. And I base this on their conduct, not on what they say. And this means that they have become in themselves moral monsters.” *

Though written almost 45 years ago, James Baldwin’s novel in which a racist cop, backed by a corrupt prosecutor willing to sweep aside the facts, is able to disrupt the life of a black man, is as relevant as the news from Ferguson or Chicago, or, for another besmirched people with slightly less dark skin, the Mexican border.

Not that all whites in the story are hostile toward blacks. We have already mentioned the benevolent Jewish landlord. There also is the store owner who comes to Fonny’s aid during the incident in which Officer Bell is trying to arrest him. A white thug had made lewd remarks and gestures toward Trish, and Fonny had chased the guy from the store into the street when the cop arrived and assumed that the black man was in the wrong. Calling him “Boy,” the cop would have jailed Fonny for pushing back had not the store owner come out to stop him, telling the cop that she knows the couple and that everything Fonny was claiming was true. The cop grudgingly gives up his prey, but ominously warns him about the future.

The accuser, a Puerto Rican-born immigrant named Victoria Rogers (Emily Rios), was pressured by Officer Bell to pick Fonny out of the line-up as her assailant. The lawyer feels stymied because Victoria suddenly has left town, presumably returning to Puerto Rico and Fonny’s only other witness, aside from Trish, is old friend Daniel (Brian Tyree Henry). He is unavailable because he has been arrested, and the prosecutor will not allow the lawyer to access him. How to hunt down the witness, when the family has no money for a trip to Puerto Rico? The system seems stacked against Fonny and Trish. All of these obstacles add up to a 20th century version of what the apostle Paul meant when he wrote that he “struggled against principalities, against powers, against the rulers of the darkness of this world.”

The family works at two levels to raise money for legal expenses and a trip to confront the runaway witness. Tish, thanks to her good looks, secures a job behind the perfume counter at a large department store. She is probably the only African American employee out front. Her work experience is not pleasant: most customers, all white women ignore her, and the occasional white man who stops to smell a sample creeps her out by the way he holds her hand and gazes at her. The two fathers, Frank and Joseph, work on a loading dock. They kick back at the system by stealing some of the merchandise and selling it. Thus Sharon is able to fly to Puerto Rico and find Victoria, but their confrontation proves to be the nadir of the story. Two victims of the system facing each other, each with their desperate reasons for their actions.

This is a film in which many things that affect the characters take place off camera. We never see what happens to Fonny in the jail. However, we are told indirectly in the flashback in which he and Tish have invited his good friend Daniel into their downtown apartment/studio. Daniel had been arrested on false charges and spent two years in prison. Released over three months ago, he is still trying to recover from his ordeal. “When you’re in there, they can do with you whatever they want. Yeah, I mean, what-ever they want,” Daniel says, adding that now he understands why Malcolm X called white men the devil. “Some of the things I’ve seen… I’ll be dreaming about it until the day I die.” Daniel’s inner terror is palpable by his posture and anguished look. Later Tish sees a blood clot in Fonny’s eye. We need no more to let us know of the pain and terror that he too has suffered—and this, not in a Southern prison, but in one in the supposedly enlightened North.

The film ends somewhat on a positive note years after it begins. Tish, accompanied by their young son, visits Fonny in prison where the three are able to share a make-shift meal together. A positive ending, but not a just one because of what Fonny had been required to do in order to escape a much longer prison sentence. The “principalities and powers” are white: the cop, the prosecutor (whom we never see), the entire legal system, Baldwin asserts, are not interested in justice, but in order, in preserving the status quo of white domination. Again, I think of Baldwin’s words in I Am Not Your Negro: “To look around the United States today is enough to make prophets and angels weep. This is not the land of the free; it is only very unwillingly and sporadically the home of the brave.”**

Justice does not triumph, but love does. We do not know what the future holds for Tish and Fonny, but we are left with the feeling, with the hope, that their love will enable them to put the sordid issues of the present behind them—though the ending with  a series of black and white photographs of blacks under stress  also show that the road ahead will not be easy.

*p.38 from the companion book I Am Not Your Negro.

Black lovers Tish & Fonny run up against prejudice & injustice when he is arrested on false charges and imprisoned while she tries to prove his innocence.
Editor Rating ★★★★★5 out of 5
More Details