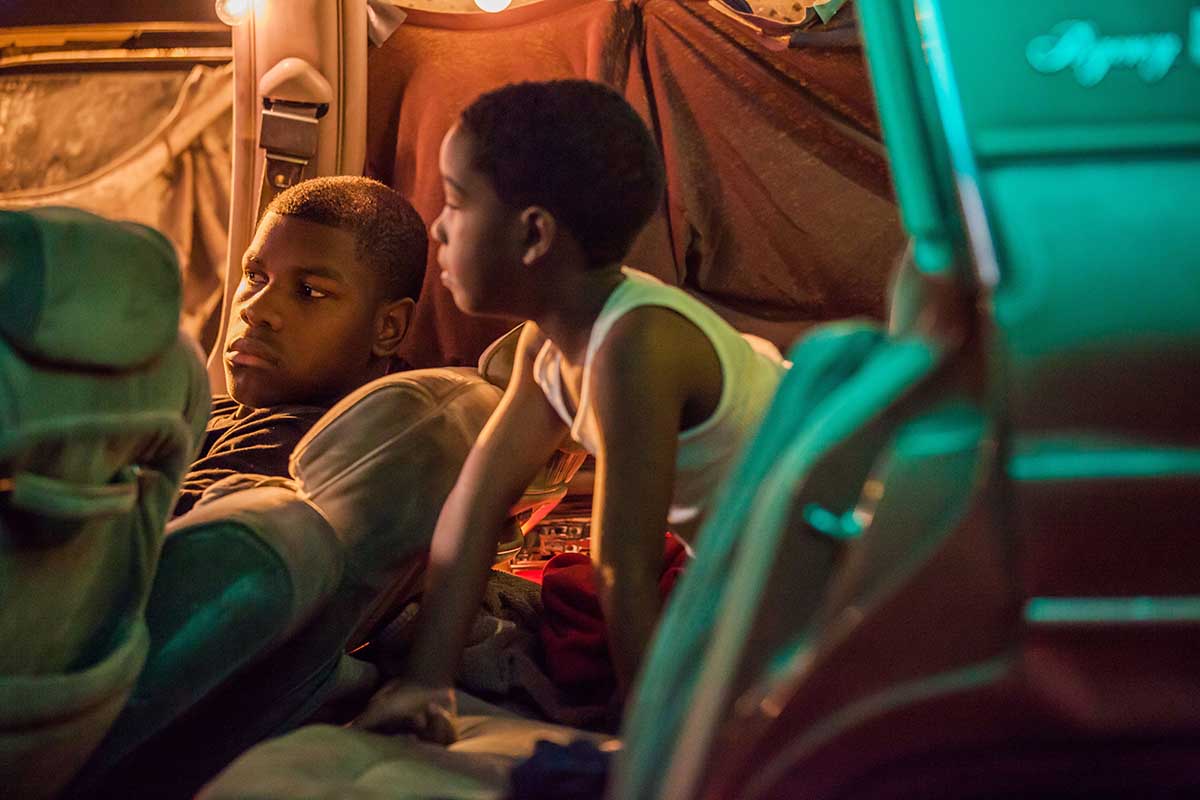 For the needy shall not always be forgotten, nor the hope of the poor perish forever.

Director/co-writer Malik Vitthal’s father-son film unfolds largely in the dangerous streets of the Los Angeles Watts neighborhood. Opening at the Sundance Film Festival in 2014 and shown in other festivals, it languished in film limbo until Netflix picked it up. It graphically shows what advocates for ex-prisoners have long been telling us—the odds for rehabilitated criminals are stacked against them by a system seemingly intended to keep those who have broken the law in a permanent underclass.

Bambi (John Boyega) is released from prison after serving 28 months for assault with a deadly weapon. While in prison, somehow (no details of that period of his life are given) he had discovered the world of books and that he had a gift for writing. He has even been able to sell one of his stories to a small magazine, so his “Imperial Dream” (we will go into the “Imperial” later) is to be able to earn a living as a wordsmith for himself and his 4-year-old son Day.

We hear many excerpts from his current writing by means of his voice-over. One of them sets up well what follows when he is released and returns to his neighborhood:

In the hood you carry truth in your heart while reality stays stashed outside. Your heart says, “Don’t kill.” The hood says, “Kill.” Your heart says, “Think before you act.” The hood says, “React.” But you’re all alone when one of those reactions lands you behind bars, going over every little thing in the darkness. And it’s easy to recognize your truth in retrospect. What’s hard is being true in the moment. Even if it kills you.

His former lover Samaara  (Keke Palmer) is in prison, so he finds that their 4-year-old son Day (Justin and Ethan Coach) has been living in the house of his uncle, still another man with an unusual name, Shrimp (Glenn Plummer). His own mother Tanya (Kellita Smith) also lives there but is so addicted to drugs that she has had no hand in the raising of the neglected grandchild. Shrimp regards his nephew as a nuisance, so he is glad that Bambi has returned for the boy—and expects payment in return. Shrimp’s own son Gideon (De’Aundre Bonds) is not available to help in a drug transporting scheme because he is on the run from a rival gang and the police. Gideon had been involved in a shootout at a party at which one of his bullets had struck and killed a 10-year-old bystander. The rival gang has vowed to wreak vengeance on him. Bambi removes the bullet embedded in his arm but feels powerless to help him otherwise.

The “payment” that Shrimp demands from Bambi is to drive a car with a cache of illegal pills to another state. The cache is so valuable that Shrimp believes only a family member can be trusted with it. It is a tempting offer because the driver would earn $4000, money he badly needs for starting his new life. But that new life includes a rejection of his old one, so he tries to put off his uncle as he sets forth to find a job.

And that is where he bumps up against the dilemma facing so many ex-prisoners. When he goes to apply for a job he learns that he cannot get one because he does not have a driver’s license, he cannot get a driver’s license because the state has slapped on child support (a shocking $15,000!), which he cannot pay, because he cannot obtain a job. There is that offer (actually, demand) from his uncle, but he knows that accepting it would enmesh him again in the activities that led to his initial incarceration. Shrimp orders him and Day out of the house.Thus father and son become homeless, forced to live in his car, so decrepit that it will not start. A homeless acquaintance helps him push it to a nearby parking area adjacent to a public housing project, Imperial Courts Housing Community. Thus the other half of the film’s title. Bambi tapes up towels on the windows for privacy and manages to connect a string of decorative bulbs for light. Here he beds down his son, constantly assuring him that everything will be OK. The stoic boy who has witnessed so much turmoil offers little trouble. Each night Bambi reads to the boy, sometimes from his own writings that he jots down in his notebook after putting his son to bed. Recalling the tender Irish film Rosie about a homeless family with 2 school-age children, I thought, at least Bambi does not have all the hassle of getting the boy ready for school, but then a child welfare worker complicates his life when Bambi leaves Day for a few hours with his half-brother Wayne (Rotimi Akinosho), who relaxes his vigilance so that the boy is injured and the hospital files a report. Oh yes, I haven’t mentioned yet the two local cops that keep Bambi under surveillance, sometimes stopping him and interrogating him—for no reason other than they expect him to fail to follow the probation rules. Both of them are Black, but they have assimilated most of the racist outlook embraced by members of the justice system, so they show little sympathy for his plight, except for later on when the roof of his precarious life seems to be crashing down.

The film’s mood is almost unceasingly grim, except for a couple of moments. One is the scene when, after spotting a couple of urban horseback riders, father and son come across a man tending to a horse and Bambi pays him to lead Day astride the horse, on a few laps around the yard. The usually sober-faced boy smiles amidst the bliss of being able to fulfill his dream of sitting astride one of the beasts. The other break in the somber mood is when Bambi takes one of his stories to a publisher. The receptionist informs him that they do not accept unsolicited manuscripts. The desperate father pleads his case so well that she takes the envelope. When she tells him that she cannot promise anything but that she will turn it in to a reader, Bambi leaves with a glimmer of hope in his heart.

Malik Vitthal’s film offers us an unblinking look at life for a former prisoner trying to walk a straight path. With all the obstacles that the justice and welfare system set before him, it seems like Bambi is like a swimmer trying to swim up Niagara Falls. Two other characters are also memorable, one tragic and the other hopeful. First is Gideon, Shrimp’s son marked for death by the rival gang. Normally he would have been a helpful ally of Bambi but is too deeply enmeshed in his own troubles. Also there is Wayne, Bambi’s half-brother with his own dream of escaping the ghetto. He has studied hard enough in school to earn a partial scholarship to Howard University. But he still needs a substantial amount of cash, and their uncle Shrimp is the only one with money.

Bambi, of course, is the central character, so it is his dilemma that is central to the film. Another of his writings that we hear in voice-over expresses his fear and hope for his son:

You call your son Angel Boy cos in the bricks, the softer the name, the harder the man. But Gideon was hard. And you were hard. And your daddy was hard. And look at us. Deceased, derelict, departed. And you swear, Angel Boy won’t end up a savage. Dead, smiling on a T-Shirt. He won’t work the corner. He won’t work the curb. He won’t want to be the emperor under this dark Imperial highway. Because monarchs are not elected around here. They’re made with a gun. And they reign only until it rains… all over.

By the end of the film the “rain,” meaning his troubles, does seem to be falling “all over.” His final aggressive encounter with Shrimp makes us fear that his dream will explode amidst a spate of violence. And yet the not quite resolved ending leaves open the possibility of a rainbow, however faint, shining over his rain-drenched head. Nothing is tied up in a neat package, but one good result of his earlier efforts leaves us somewhat relieved of the film’s pent-up tension, as well as hopeful for better days.

A just out of jail father, who dreams of becoming a writer, reconnects with his son but has to live in his car when he refuses his uncle's demand to help in his drug business.
Editor Rating ★★★★★4.5 out of 5
More Details