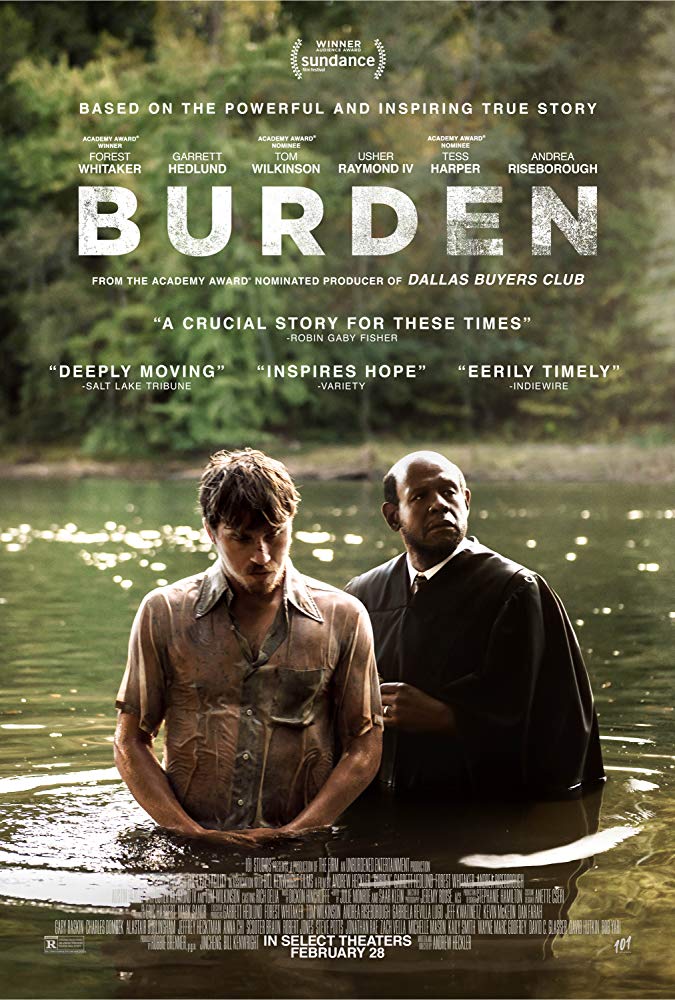 The following was conducted via telephone on February 21, 2020. I had seen the director’s social justice film Burden (now being released in stages across the USA) and thus was eager to talk about it during the all-too-brief 15 allotted minutes. My film review is already up on this site, and my review of the book  inspired by the film will be in the March Visual Parables, as well as the rest of this interview. The March edition should be up by Friday,  March 6. 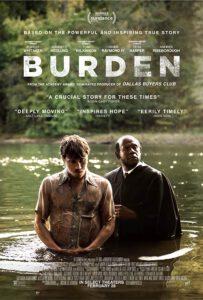 After preliminary exchange of greetings, I asked Mr. Heckler where he was born, as his very brief IMDB bio did not include such information. In the following transcript some of the places where the tape was not understandable, I have placed …and sometimes this represents a word or two, other times a phrase.

A.H.: I was born and raised in New York. It’s funny, cause my father had tons of business in the South—and I’m talking about the deep South growing up, and so we spent a lot of time in little towns like Byron Georgia and Abbeville Georgia, and also Greenville South Carolina–and many small towns around the South. I guess for some reason it seemed to have stuck within me, because I had four scripts set in the South.

Ed: Although your experience has largely been as an actor, you’ve had aspirations to be a writer/director.

A.H. That’s right, all of my professional jobs have been as an actor, but I owned a theater company in New York, and we acted in, produced and directed plays nonstop. It was that kind of background, that kind of theater training that led me to feel like I was capable of directing a film.

Ed: How did you hear about this really bizarre story (laughter). I love it that a black preacher winds up owning the building of a Klan museum!

A.H. Isn’t it crazy? The laughter that you have—that feeling of Oh my God—is exactly what happened to me. I read a small blurb in a local newspaper, the Lawrence County Advertiser, in 1996 when I was in New York running a theater, that said, “Klansman Opens Redneck Shop and Museum in small Southern town square.” But I literally couldn’t believe it in 1996. I thought, “That kind of overt racism, that kind of overt bigotry? For the 1930s, maybe, the 1950s. And so, I put it in a folder where I keep ideas…The next thing I read in 1997 along the same line in the same newspaper, “Klansman sells Redneck Shop and Museum to a black activist minister.” At that point I almost fell off my chair, and I picked up the phone and I called the Rev. David Kennedy. I said, “I want to come down there and see you guys.” And he “It’s a big country.” And so, I went down there, and I wound up spending at first about ten days. Once I met the people, once I saw the joy of the congregates in the church, cooking and singing, dancing. They were so filled with joy. I felt it was real. There’s got to be a story. And then I went back, and I figured, “If I am really going to write this story, I’d better find the other side of the field.” And so, I tried get to the Klansman, and I ended up going back down there and meeting with those guys, under cover. Didn’t tell them what I was doing—well, I wanted to get their perspective, I wanted to see who they were. In order to write a story about a man who sort of clawed out of his family hatred, the Klan, I wanted to know why he was there in the first place. And that was instrumental in getting him out.

You can read the rest of the interview in the  March issue of Visual Parables.