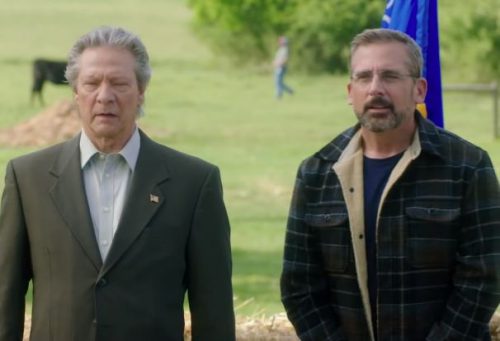 He has brought down the powerful from their thrones,
and lifted up the lowly;

This is the delightful story of a political operative who might be too smart for himself.  It has been six years since director/writer Jon Stewart’s first film Rosewater was reviewed here. And now with his second feature coinciding with the coronavirus pandemic, the poor guy will be forced to release it to direct video on June 26. It is billed as a comedy drama, and thus somewhat lighter than his first film, which was based on a true story of a journalist arrested in Iran and tortured because he was thought to be an American spy. (Bizarrely, the sketch of him on John Stewart’s late-night TV show was used as evidence of his guilt!)

Stewart’s political satire does not hedge by conjuring up fictitious names of political parties, though the characters themselves are made-up. Steve Carell’s Gary Zimmer is a political consultant of the Democratic Party, and Rose Byrne’s Faith Brewster works for the Republican National Committee.

Footage of a Wisconsin farmer,  retired Marine Colonel Jack Hastings (Chris Cooper), standing up for immigrant rights at a small Wisconsin’s town meeting is sent to Zimmer in Washington. Zimmer, seeing the liberal stance of the Bible-quoting man, as an opportunity for the urban-centered Democratic Party to reconnect with rural America, hops aboard his private jet to recruit the farmer by backing him in a run for mayor of the conservative town. If they can win there, he believes, they can win back the rural vote anywhere.

What transpires is a mixture of fish out of water tale with a bit of Mr. Smith Goes to Washington (in the way that Cooper plays farmer Hastings) to Our Brand is Crisis to Bob Roberts, The Candidate and more. Hastings, who has a beautiful daughter named Diana (Mackenzie Davis), agrees to run if Zimmer will stay in town to manage the campaign himself. Will there be the usual Hollywood romance between this slick political operative and the Farmer’s Daughter? That you will have to discover for yourself.

The small agrarian town is the Mid-West equivalent of the rust-belt towns of the East, so Zimmer has no problem finding spacious campaign quarters among the large number of boarded up buildings along Main street. Soon he has a sizable staff of workers and the electronic equipment worthy of a big city campaign. No, not city, but a national campaign, so much elaborate equipment is trucked into the little town! Slick TV ads are soon appearing, and reporters from around the state are taking notice of the campaign.

A humorous episode occurs when Zimmer finds the Internet connection in town too slow, so he and three operatives park in the lot of the high school to take advantage of the school’s Wi-Fi. A teenage Safety Squad member is sent out to warn them that they are trespassing. They pay no attention, and soon are accosted by an upset adult Safety official. The story in the newspaper of their being charged with trespassing is a bit embarrassing, and to us funny.

An earlier scene is a riff on the well-known fact that political operatives pay attention to the tiniest detail of a candidate’s appearance. Zimmer has assembled a small audience on Hastings farm where a cameraman is about to record the Colonel’s public announcement of his candidacy.  He has been staged so that several of his dairy cows are grazing behind him. Zimmer stops the recording because he does not like the way the cows are arranged. Recording begins only after Zimmer has shown the handlers just what he wants.

The pace of the comedy really picks up when the Republican National Committee sends Faith Brewster to town to beef up the campaign of the incumbent Mayor Braun (Brent Sexton). Their exchanges are worthy of the old screwball comedy series. In one funny scene she says that he is getting fat and leans over to lick his cheek with as much moisture as she can summon up.

Zimmer’s elaborate plans even include flying his charge to Manhattan where the farmer awkwardly asks for “Camille tea” rather than an alcoholic drink and makes a seemingly inept statement that by its very simplicity appeals to the socialites and politicos. A montage shows bigger and bigger checks being made out to the campaign, along with a tally board showing Mayor Braun’s poll numbers dropping. Hundreds of thousands of dollars are pouring into either the campaign coffers or the two Super PACs that Zimmer has set up. The latter is handled in an amusing way, with him assigning several campaign staff to each PAC and then telling them to take desks at the back of the same room—but not to discuss or coordinate matters with each other. Oh, sure, no coordination between them.

However, despite all his skills, it looks like Zimmer’s campaign will fail by a percentage point. He then receives some dark material about the Mayor and a relative. Both the Colonel and Diane are appalled at the idea of using it, but Zimmer tells them they must if they want to win. What happens next comes as quite a surprise. It is something like what in the Gospels scholars call “The Great Reversal” in Mary’s Song as well as in the teachings of Christ. All the main characters wind up at a different place and are seen in a different light than expected at first. We wonder who are really the smart ones and who the rubes. It is a delightful twist on an old theme—remember Frances McDormand seemingly naive Chief Gunderson in the Coen Brothers’ Fargo?

As a satire Jon Stewart’s might not be as hard hitting as Tim Robbins’ 1992 dark Bob Roberts, the latter film ending with the camera scanning Thomas Jefferson’s Memorial and one of his immortal sayings chiseled there. Nonetheless, between laughs he raises enough issues to make viewers think about the morality of politicians and the effect of excessive amounts of money on a campaign. I love it that he chose Chris Cooper to play the straight-shooting candidate for mayor because Cooper brings the same kind of sincerity and gravitas to a role as did Jimmy Stewart or Gregory Peck. I have been a fan of his ever since he played the Christ-like Joe Kenihan, the courageous union organizer teaching nonviolence in John Sayles’ Matewan.

Available on June 26 on platforms including Amazon, Apple, DirecTV and Fandango, this is a good film for a country about to head into the final, frenzied stages of the Presidential campaign.

This is the delightful story of a political operative who might be too smart for himself.
Editor Rating ★★★★★4.5 out of 5
More Details