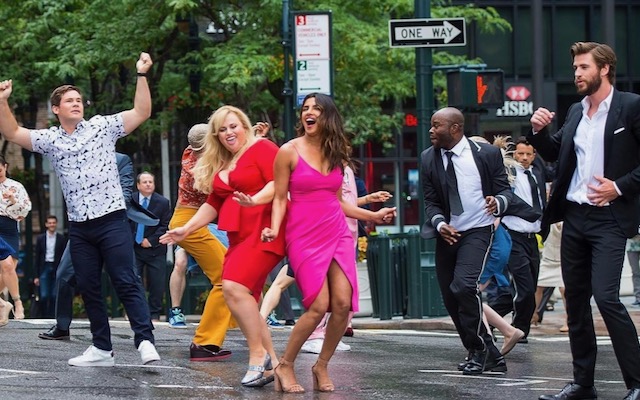 Do not be conformed to this world,[c] but be transformed by the renewing of your minds, so that you may discern what is the will of God—what is good and acceptable and perfect.

Todd Strauss-Schulson’s is an enjoyable satire of the romantic comedy genre. However, it ultimately yields to the genre’s conventions but still manages to include a good lesson that runs counter to it. And it centers on a heroine whose physique is the opposite of the svelte pencil-slim girl that the genre holds up as the ideal of female pulchritude, such as in Gary Marshall’s Pretty Woman, the 1990 film starring Julia Roberts. It is that film that the young Natalie (Alex Kis) loves to watch over and over. Out in the kitchen her mother (Jennifer Saunders), making an ice cream float (using a cheap boxed wine!), argues against such female fantasies. Speaking from experience, she declares, “Life’s not a fairy tale.”

Jump ahead over 20 years, and Natalie (Rebel Wislson) has become an architect at a firm where too many regard her as a glorified coffee fetcher and she has accepted her mother’s anti-romantic philosophy. She pooh poohs her assistant Whitney’s (Betty Gilpin) infatuation with romantic movies. Whitney argues back that her boss is more attractive than she realizes and is blind to reality. It is true that Natalie does not realize that fellow employee and best friend Josh (Adam Devine) is attracted to her. Her world has become drab and boring, as reflected in her dingy apartment. When she enters a conference room where the staff is gathered around a new client Blake (Liam Hemsworth), the latter ignores the rolled-up blueprint she is carrying and mistakes the coffee she is carrying as intended for him. Once more she is thought of as just an errand girl.

Natalie’s life is changed forever in a subway station where she is knocked unconscious hitting her head against a pillar while struggling with a thug trying to steal her purse. She wakes up in what the attending physician calls an emergency room but looks to Natalie to have been decorated by a high fashion designer. Everything seems changed to her. The street outside her apartment is no longer grungy, but gentrified with flowers everywhere, the old ugly shops replaced by attractive boutiques, She thinks she is in the wrong apartment when she first enters, everything looking like it came out of an interior decoration magazine.

Soon events in her life seem as if they too came from a romance film. She meets wealthy real estate investor Blake (Liam Hemsworth) in a cute way. He takes an instant shine to her, and the two begin a series of dates. Natalie keeps stumbling in the cute way of movie heroines, and whenever she swears, some background noise covers it up. Likewise, her work buddy Josh meets a glamorous Isabella (Priyanka Chopra), who falls in love with him. Thus, it looks as if the two friends will marry someone else, with Josh and Isabella in church about to exchange their vows—just like in a romance film. There is even the cliched best gay friend, so prevalent 20 or 30 years ago, the real life next door cranky neighbor Donny (Brandon Scott Jones) now becoming  Natalie’s good friend and make-up artist. Be prepared to wince at all of the awful mannerism, limp wrist, high feminine voice.

Of course, it is no spoiler to reveal that Natalie returns to reality and to… well, find out for yourself. What saves the film from selling out to the romance genre is Natalie’s learning to love herself, with or without a man. Our culture has taught her from birth not to love herself unless she can mold her large-sized body into the pencil-slim figure of models and movie stars. From her birth, hucksters have tried to sell her salves, creams, diets and treatments “guaranteed or your money back” to transform her into an acceptable person. When I was young the culture could be cruel toward its Natalies, Arthur Godfrey and others singing the hiateful song “The Too Fat Polka” with no one raising any objection over such lines as “I don’t want her, you can have her, she’s too fat for me.” This became a hit song!

This is a delightful film for a group of young adults to watch, the leader’s aim being to explore the values that underly the romantic comedy genre and how they compare to what we might call biblical or gospel values. Many people overlook the basic insight of what often is called “the second great commandment” that our love for others is tied in with the necessity of our loving ourselves. And how difficult self-love, as opposed to selfish love, is when society tells us we lack one of the necessities for being accepted by others, a svelte body.

Again, I am brought back to my favorite translation of Romans 12:2, that by  J.B. Phillips, “Don’t let the world around you squeeze you into its own mould, but let God re-mould your minds from within, so that you may prove in practice that the plan of God for you is good, meets all his demands and moves towards the goal of true maturity.” Natalie may never have set foot inside a church, so she might not know Paul the epistle writer from the singing Paul of the famous folk trio, but she nonetheless has unwittingly accepted his advice, making her a much stronger and insightful person at the end of the film. She lives up to the actress’s name who plays her.

Natalie, an architect treated like a gofer, discovers love, including self-love.
Editor Rating ★★★★★4 out of 5
More Details