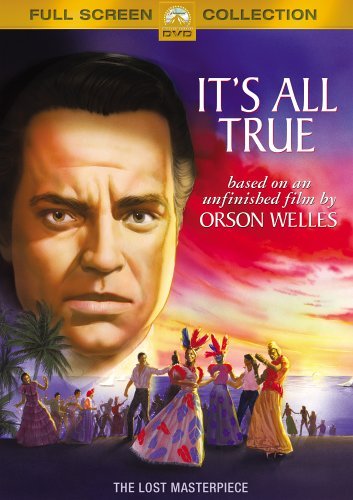 This is one of many from the stack of vintage films in my DVD collection that I will be reviewing from time to time.

He raises the poor from the dust, and lifts the needy from the ash heap… 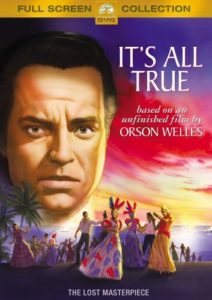 This fascinating documentary pays tribute to film genius Orson Welles, thanks to the three men listed as directors of the film, the late Richard Wilson (who had worked with Welles), Bill Krohn, and Myron Meisel. Welles was busy, after making his masterful Citizen Kane, editing The Magnificent Ambersons as well as starring in Journey into Fear. Despite this he agreed to Nelson Rockefeller’s proposal to go to Brazil to make a film of its Carnival under the sponsorship of the State Department and with RKO financing the project. This was part of the governments “Good Neighbor” policy, an attempt to counter the Nazi influence in Latin America. The film not only was never finished, but the project effectively ended the young director’s influence in Hollywood, transforming the “wonder boy” into the eternal outsider.

Working without a script, Welles intended the film to have three parts, the first about a boy and his bull, “My Friend Bonito,” the second about Rio’s “Carnival, “The Story of Samba,”  and the third about four peasants who traveled 1,650 miles on a raft called a jangada to petition the government for decent living conditions, “Four Men on a Raft.” As he shot footage in Rio the director became fascinated with how the Samba was integral to the Carnival and the Brazilian life, but when he sent his footage to RKO, they were upset by all of the dark-skinned people jumping up and down and by the shots of the slums in which so many languished during most of the year. The racist executives saw this as Communist propaganda. In addition, there filtered back rumors of Welles living a debauched life. A new RKO president cut off finances, though just enough money was left for the director to make “Four Men on a Raft.” Welles had become fascinated by the four men whose recent adventure was still being celebrated by the people—the four peasants were received by enthusiastic crowds when they entered Rio’s harbor. They did get to meet with Brazil’s dictatorial President Vargas, but his promises of improved living and retirement conditions proved empty.

This latter, a re-enactment of the original voyage employed the actual jangadeiros and the villagers from their home. Scarce funds forced Welles to shoot without any sound equipment, so he produced it as a silent epic, with just music added to enhance its drama. It was also made amidst the sorrow of all, because at the beginning during the reenactment of the jangadeiros’s arrival in Rio’s Guanabara Bay, a large wave capsized the jangada, and the leader drowned. Despite this, the finished segment is a moving work, displaying Welles’ facility with low-angle shots of the characters and use of deep focus. He added a romance and wedding as a prelude to the true story, but this ends with the husband drowning (a tribute to the real victim?) and a powerful sequence of a long line of villagers carrying the body from the water, where a toddler had discovered it, to the top of a cross-dominated cemetery. This sequence alone is worth taking the time to watch the film.

Stuck in Rio, Welles could not supervise the editing of what might have been an even greater masterpiece than Citizen Kane, and so studio hacks not only butchered the long film by cutting 45 minutes of it, but even adding a “happy ending.” (I can almost hear them say, “Well, Kane was such a downer with the guy dying alone at the end, let’s give the public an uplift with this one.”) Without Welles to finish it, The Magnificent Ambersons was turned into a critical failure.

Though Welles was never to finish It’s All True, his footage was not really “lost,” but languished in a Paramount vault until it was discovered at the beginning of the 90s. Using it, the three directors also found interviews of Welles speaking about his project. Securing funding, they were able to find and interview the Brazilians who had worked with Welles or a son, relatives, and the now elderly woman who had played the lovely bride in the segment about the raft journey.

Both those who are fans of Welles and film lovers interested in the history and making of films will relish this rich documentary. I was glad to see that the great director championed the poor, both those in the favelas for whom Carnival became the bright spot of their impoverished lives and the four brave peasants who risked so much to speak out to better their condition.

This documentary tells the story of Orson Welles' unfinished lost film & its rediscovery and restoration by his admirers.
Editor Rating ★★★★★5 out of 5
More Details