What a week it’s been for those engrossed with all things Titanic, with the re-release of James Cameron’s blockbuster, plus TCM’s airing of the 1958 film A Night to Remember, ABC Television’s mini-series Titanic, and the History Channel’s documentary on the salvaging of artifacts from the sunken ship. I didn’t see it, but someone told me that The Unsinkable Molly Brown also was shown on a cable channel. Quite a fitting way to observe the 100th Anniversary of this terrible marine tragedy! 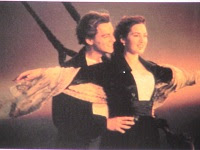 The 3-D is well done, but the main reason for laying aside your DVD version of James Cameron’s film and venturing out to the theater is the opportunity for seeing the incredible special effect scenes on a big screen, especially if there is an Imax theater near you. The overworked “Awesome” is appropriate for this. No doubt credit for this film’s enormous success is due to James Cameron’s successfully melding a classic love story, so ably depicted by  Kate Winslet and Leonardo DiCaprio, with a spectacular disaster.
The first two hours consist of the despairing rich Grace bonding with the free-spirited Jack who dares to hope that they are meant for each other. Thus, though we see many touching scenes of the other passengers plight during the last third of the film, it is their fate which holds our attention. Cameron focuses so narrowly on the lovers that he does not include nearly as many details as the 1958 film A Night to Remember, possibly because he thought they might be distracting. For example, the film never mentions the ship which was just ten miles away and failed to come to their aid
Although the re-release of Titanic did not capture first place at the box office (as did Disney’ Lion King, it has done well, coming in No. 4 on its opening weekend. It is worth visiting again: even though I knew the plot well, the scene of his entrapment below deck while the water rose in the room was still suspenseful.

On DVD: A Night to Remember
Not Rated. Running time: 2 hours 3 min. 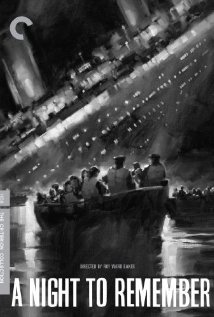 Based on Walter Lord’s carefully researched book about the sinking of the R.M.S. Titanic, this film adds very little fictional element in its straightforward account of the events. Much of the story is told from the standpoint of 2nd Officer Charles Herbert Lightoller, who after seeing to the lowering of the other life boats, took charge of those who managed to stay atop the upside down collapsible lifeboat.

This film gives a more comprehensive view of the terrible night in that considerable screen time is given to twoother ships, one that did rush to the rescue of the Titanic’s stricken passengers and crew, and one which did not. By a terrible irony it was the one closest, The Californian,  just ten miles away, that looked on and did nothing, even as the crew watched numerous rockets being fired as distress signals. Also, the ship’s radioman closed down his wireless and did not bother to co back and check it, despite the rocket signals. On the other hand the Carpathian sped at full speed when they received the call for help via wireless, but unfortunately was 4 hours away. They took in the life boat survivors, but everyone in the ice-cold waters had died.

All the Titanic films show the various ways that people faced death–from panic to calm acceptance–and this one shows a priest reciting a prayer and quoting from the Book of Revelation as several dozen people kneel around him, the little group like an island of tranquility as others scream and rush around them. Another beautiful depiction is the band which played music almost right up to the last minute, their last tune being the hymn “Nearer My God to Thee.” In this version it is the British tune used, whereas in James Cameron’s film it is “Bethany,” the tune familiar to Americans. This excellent recreation of the story also includes fictional characters as well as historical ones. Although the other versions show the strict class distinctions of society in 1912, this version  emphasizes class barriers more through the story of a snobbish British women. We follow the fortunes and misfortunes of major characters in First and Second Class and in Steerage. It was no accident that far fewer of the steerage women and children survived than did those in the upper class section, the crew refusing to unlock the gates that kept the poor in their place until the well off had been loaded into the lifeboats.
Through flashbacks the film also underlines the thoughtless hubris of the White Star Line executives during the building of the ship. They rush the construction so that one person expresses his misgivings that they are using iron bolts rather than steel ones, purchased from companies that they have not vetted. And of course, as in the other films, there is concern, voiced by ship designer Thomas Andrews, over the low number of life boats. As we have saw in the other versions, this concern is swept aside because more boats would make the promenade too crowded for the first class passengers.
You can see all four parts of the series at this site:  http://abc.go.com/shows/titanic . They are not commercial free, but there are fewer than when originally broadcast–and there are also several short “Making of” features.

And by the way, if you are hungry for more films based on the disaster, there is the 1953 film Titanic starring Barbara Stanwick and Clifton Web as estranged parents on board the ship who are battling for custody of their son and daughter. There is even a 1953 German film of the same name that Goebbels made to discredit the British and Jews. 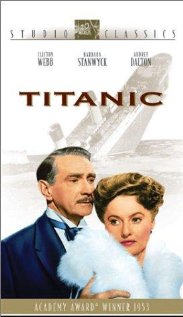 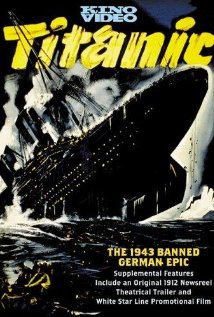