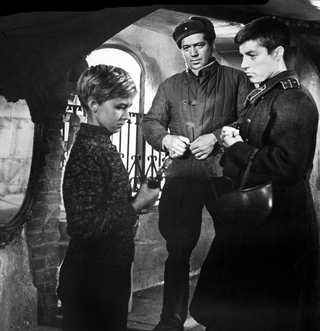 Deliver me, O Lord, from evildoers;
protect me from those who are violent,

who plan evil things in their minds
and stir up wars continually.

Had he not been raised in a land whose schools taught atheism rather than religion, 12-year-old Ivan might have uttered such a prayer as Psalm 130. When we first see him he is dressed in ragged clothes and asking Russian Lieutenant Galtsev (Evgeny Zharikov) to call headquarters for him. The young officer puts him off, regarding him as an impudent pest. In a commanding voice the boy keeps insisting until at last the soldier has reached the boy’s contact, and he is told to treat the boy kindly. Ivan, he, and we, learn is an orphan who has been serving as a scout behind German lines, bringing back valuable information about the enemy’s deployment of its troops.

This is Russian filmmaker Andrei Tarkovsky‘s first of seven feature-length films—and on the basis of having seen two others—his most accessible one for the general public. Released in 1962 and set during the years of the Nazi invasion of Russia, it is a war film in which we never see a battle or a single Nazi soldier. Also, it is far different from earlier Soviet films praising “Mother Russia” and populated by patriots whose only motivation is to serve her wholeheartedly. No glory in this film! Tarkovsky has given us a character study and of war’s violent effect upon those caught up in it, especially upon a child. Ivan Bondarev (Nikolay Burlyaev) is a Russian, but with just a few changes in the script, he could be a Ukrainian boy today, orphaned by cruel invaders.

The boy’s protector soon arrives. He is Captain Kholin (Valentin Zubkov), obviously fond of the boy—indeed, later we learn that he intends to adopt the lad if they both survive the war. We learn that Ivan’s family was murdered by Nazi troops and that the boy had joined up with anti-Nazi partisans before becoming a scout for the Russian army. Because of his small size, Ivan has been able to sneak into places and when pursued, hide better than the grown men sent out with him. He had returned when many of them had been shot and killed. Kholin and his comrades want to send the boy to the safety of a military school, but Ivan keeps resisting, saying that he would just run away if they do so. They reluctantly allow him to stay.

The house the soldiers are staying in once was used by Nazis and their prisoners. The latter had written that they were soon to be executed, and they call for vengeance. During a mission we see another sign of Nazi savagery, two Russians who had been executed and then their bodies propped up with a sign in their dead hands. Sometimes a brief respite from war is provided by Ivan and Lt. Galtsey looking at a large art album left behind in the house. The first picture is Albrecht Durer’s etching of “The Four Horsemen of the Apocalypse,” and the boy asks if they are Germans. Told they are, he says that he saw one like the horseman, on a motorcycle. He notes that they too are killing  people. The next picture is a portrait, and Ivan asks “Is he a Fritz too?” Galtsey replies, “He’s either a German doctor or writer.” They have no writers,” Ivan asserts. “I saw them burning books in a square. They poured gasoline on them and set them on fire. There was soot in the air for a week.”

There is also a brief subplot involving the two officers’ interest in the charms of Masha (Valentina Malyavina), a beautiful army nurse. Both Captain Kholin are interested in her, but the possibility of any romantic relationship is soon cut off when she is transferred elsewhere.

Interspersed throughout the film are flashbacks and dreams to Ivan’s happier days reminding us of what he has been deprived. Central to most of them are his lovely mother. In one scene they peer into a deep well, and she informs him that down in that darkness the stars can be seen, even though it is daytime. He plays with friends, frolics on a beach, and flirts with a pretty little girl. They play hide and seek. In their innocence the little girl is stripped to the waist as they run along the beach. They ride in the rain on a lorry loaded with apples. Horses come up to eat the fruit that falls off the wagon. It is a child’s Eden swept away by the violence of war.

In one sequence when the boy is alone and the room goes dark, Ivan takes up a knife in one hand and his flashlight in the other. He reads again the sad wall grafitt written by the doomed prisoners, ending with its call for vengeance. The boy imagines that he is part of the squad that surrounds the murderer, Ivan calling out to him that he will put him on trial. This reminded me of my own days long ago when I played “War”—sometimes in company with others, when we would decide who had to play the hated “Germans or Japs,” and other times, when like Ivan alone, I would imagine the enemy “out there.”

I will not go into the details or the outcome of the mission Ivan begs for. The small party must make their way across the broad river in darkness, the sky occasionally lit for a couple of seconds by a falling flare. At the edge of German occupied territory the boy insists on proceeding alone toward his objective, while the others, as they sneak back to their lines, cut down the two Russian scouts who had been tied up and executed when caught by the Germans. When the Germans spot their small boat, the two have to plunge into the river and swim along with the boat.

The film jumps ahead to the end of the war when Russian forces have captured Berlin and soldiers view the charred corpses of Joseph Goebbels and his wife, who had poisoned their children and then committed suicide. Only then do we learn of Ivan’s fate, gleaned from the captured files of the Nazis—they were ever so meticulous in their record keeping! It is the Lieutenant who reads the file on Ivan. The soldier walks through the ruins of the Nazi prison, observing the terrible means of execution—a set of nooses, even a guillotine. The film ends with another dream sequence.

Ivan is with his beutiful mother, and then goes to play a game of hide and seek on the beach. As he hides his eyes and counts, the other children, including the little girl—his sister?—scatter out of sight. Ivan looks for them, spies the girl, and chases after her. He catches up with her, passes her, and continues to run. A large dead tree looming ahead apparently stops him, the screen turning black, bringing the film to an end.

Thus Ivan’s childhood is cut short by the violence of war? And in that last grisly scene of the dead Nazi children, also that of the enemy? Watching this artistically made film is a moving experience any time—the crisp black and white photography and the insertion of religious imagery (an icon and a metal cross of a ruined church). But seen now when it is the Russians who are the destructive invaders, makes the film all the more powerful. Would that it could be shown again in Moscow today!

Watch the film on YouTube by clicking on this title: Ivan’s Childhood. Also available as a DVD in The Criterion Collection, so chances are your library has this.